Donald Trump: “The President of Betrayal”

Donald Trump: “The President of Betrayal”

How do Democrats frame the impeachment process to voters going into the 2020 election cycle? 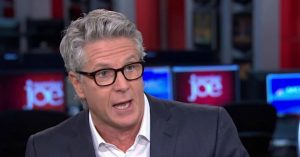 Donny Deutsch, a marketing executive and frequent contributor on MSNBC (who had his own show on the network earlier this year), has a suggestion.

Speaking on Morning Joe the day after Fionna Hills and David Holmes testified to the Intelligence Committee (click on the link here), Deutsch, citing the low viewership ratings of the hearings, proposed that Democrats need to brand the 2016 Popular Vote Loser as “The President of Betrayal.” By doing this, Deutsch said that the Democrats should build on the impeachment inquiry and extend it to the:

“Kitchen table issues” showing how Individual One betrayed the “American Trust, the National Security, the Constitution, the Presidency, he betrayed us on education….taking our budget back ten percent, he’s gonna betray us on healthcare, he stills wants us to repeal Obamacare,…he’s betrayed you on taxes.”

Deutsch went on further, saying that Democrats need to focus on the voters not glued to the impeachment hearings, convincing them that Trump is:

Deutsch was then assisted by Republican strategist (and never Trumper) Susan Del Percio who suggested a potential sound bite stating:

Fareed Zakaria, a Washington Post columnist and the host of CNN’s Fareed Zakaria GPS indirectly expanded on what Deutsch said, writing in a recent column that Trump is “upending U.S. Foreign Policy,” betraying and lying to allies like N.A.T.O. members, the South Koreans, the Japanese, and the Kurds to pursue his America First-Putin and China Benefits Policies.

Others have pointed out that Trump has betrayed his promises on major infrastructure initiatives, working hard, and getting Mexico to pay for the wall.

Over the last several days, Mr. Trump has betrayed the military codes of conduct by intervening in the punishment proposed by the Navy Secretary towards a convicted Navy Seal.

With Republicans in Congress living in the Trump Zone and Fox Island of alternative reality are oblivious to the what is going on around them, Democrats do need to be able, as Deutsch proposed, to pivot how the corrupt character traits exhibited by Trump during the Ukraine episode apply to how he and his policies are disrupting their daily lives.

Most of the Democrats running for national, state, and local offices are capable of framing the message that Trump is “The President of Betrayal.”

They should also take that message and ask the Republican state and local candidates defending and enabling Individual One “Where were you when Trump betrayed Us?”

Featured Image from The Independent