Home/Education, Immigration, National Politics/Senator Steve Farley is Running for Mayor of Tucson to Protect the City
Previous Next 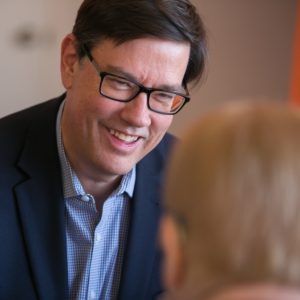 Steve Farley came to Tucson 25 years ago and has represented the city in the state legislature for 12 years.

Veteran state legislator Steve Farley announced today that he is running for Mayor of Tucson, so that he can protect the city from attacks by the Trump administration and the state Legislature. He pledged to create a construction job training program for young people, to fight climate change and to protect migrant and asylum-seekers.

He was surprised by the retirement of Mayor Jonathan Rothschild after 8 years in office. “I realized that the experience I could bring to serve the city I would be amazing,” he said in an interview with the Blog for Arizona. “I chose Tucson for my home 25 years ago and it is a dream to be able to serve the city I love.”

Farley, age 56, has been a popular Democratic state legislator for 12 years, and his last day in the state Senate is January 13. He also ran for Governor in an unsuccessful primary bid. He operates a graphic art studio in Tucson and has created public artworks around the city.

Regina Romero, a city councilwoman for 11 years, has also announced a run for mayor.

“Frankly, we need to protect our citizens from Donald Trump,” he said. “People in Latino and immigrant community are very afraid of being targets. Federal employees are fearing for their paycheck because of the shutdown. Just take the fact that this guy is trying to shut down trade with Mexico when they are our biggest trading partner.  A third of our retail income comes from legal residents south of the border. We can’t afford to create the kind of war he says we have. Trump is saying there is a war at the southern border and we’re living in terror – but this has nothing to do with the reality of how we live in southern Arizona. We have to protect our communities from any attacks.”

Farley has helped refugees to assimilate since 2015, pushing against the anti-immigrant policies of Trump and Gov. Doug Ducey. He founded Arizona Welcomes Refugees, which holds a weekly potluck dinner at Grace St. Paul’s Episcopal Church and has organized welcome parties of at Arizona airports. Farley has grown the group to 4,000 members. “At our potluck, refugee families come and people who’ve been here longer as Americans come together. People create friendships to help people settle into their new country. These people are so grateful to have a safe haven. This is where energy for our society comes from,” he said.

He is hesitant about a proposed ballot initiative to make Tucson a sanctuary city. “My #1 watchword is ‘do not harm refuges,’ stand up against separating families, and against the private prisons taking them in. That’s the focus I want to have, not to make it a big political issue and battle. It would not serve refugees well to bring that kind of political attention on them, when they want to escape that.”

Protection from the state Legislature 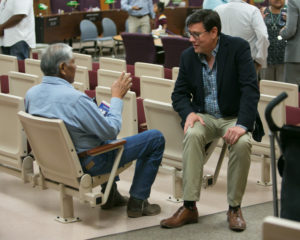 “The idea of working across the aisle, getting neighborhoods working with developers, environmentalists working with business people, Republicans with Democrats — that’s something I’ve always stood for,” Farley says

In 2016 a state legislator complained about Tucson’s gun safety ordinance that included destroying guns used in crimes. The state brought a case to the Arizona Supreme Court, which ruled against the ordinance in 2017. Similar complaints ended Bisbee’s ban on plastic bags, and Tempe’s voter initiative to expose dark money.

“One of my biggest strengths that I bring to the mayorship is my in-depth knowledge about the people and processes in state government. I went there to try to defend Tucson from attacks. Once I become mayor there be fewer attacks because people from both sides of the aisle know and respect me. I can pick up the phone because I’ve got all these people’s numbers — mayors, supervisors, and legislators. If someone tries to go after Tucson, I’ll know how to fend that off. And if it’s time for a fight, I know how to fight and win.”

“Not only did I learn things from the state legislature, it learned things from me that I brought from Tucson. What you do is listen and serve. You don’t burn bridges no matter how tempting it is, because you may want to cross it one day. When you listen to people who you think you disagree with, and you get that kernel of truth in there, even if it’s hard at first, you’ll come up with better solutions than if you think you have all the solutions on your own. That’s what enabled me to be effective in the legislature.”

Tucson Water anticipates that in August, the US Bureau of Reclamation will find that the water in Lake Mead has dropped to a Tier One Shortage, meaning that the state’s water supply will be cut by 12%.

“We are on ground zero in Tucson, and we’ve got to expand our green energy and solar energy programs. There is a lot we can do to help people insulate their homes, use less fossil fuel and save money,” Farley said.

He pointed to Brad Lancaster, a supporter who is an expert in rainwater harvesting and water management, and co-founder of Desert Harvesters, a non-profit organization. “They’ve been doing amazing stuff to harvest the water we are getting. “We can come up with solutions that will grow our economy because water shortages will be a challenge around the world. We’ll make clear that if you have interesting ideas to save our water supply, you can start your business and grow it here.”

“We can do this together to solve the job shortage in the construction industry and to give people training, by working with Pima Community College, building trade unions, and construction companies. We get a lot of things done for a win-win solution. That’s something the mayor should do,” he said.

Farley was instrumental in winning voter approval by a 60%-40% margin for the Regional Transportation Authority’s (RTA) $532 million program to improve roadways, transit, safety, cross-town mobility and reducing congestion — including the modern streetcar.

He worked across the aisle with then-Governor Jan Brewer to expand Medicaid to 400,000 people in poverty in 2014.

Farley is known for public art projects like the tiles on the Broadway underpass depicting “the diversity of people walking down streets downtown in the 20th century. It represents who we are and the strength through diversity that we are. Everybody sees somebody who represents them.”

He also posted photos of residents of Barrio Anita and Barrio Hollywood at St. Mary’s and I-20, artwork on Grande Avenue, at the Tucson Botanical Garden and even murals commissioned by the Bishop of Tucson at a cemetery of people from the 1870s.

“The idea of working across the aisle, getting neighborhoods working with developers, environmentalists working with business people, Republicans with Democrats — that’s something I’ve always stood for. If you get everyone in the room listen respectfully, and find what you have in common, there’s nothing you can’t do.”