There are far too many political pundits who still use the old canard that “if the economy is good, the incumbent is reelected” (ignoring all the historical exceptions to this supposed rule).

And by economy, these lazy political pundits mean the stock market, which is not the economy. The Wall Street fluffers at CNBC and Fox Business are the worst.

Since you can’t fix stupid — you will continue to hear this canard this year — let’s take a look at some recent economic reporting for a reality check on the economy.

[Just as an aside, Trump’s stock market rally is very good, but still lags Obama and Clinton: The Dow Jones industrial average has gained about 45 percent since Trump was sworn in nearly three years ago. The Dow was up about 53 percent at this point in Obama’s presidency and a whopping 57 percent in Clinton’s early years in office.]

The December jobs number came out on Friday, and showed US job gains slowed in December to 145,000 as unemployment rate stayed at 3.5%. While the unemployment percentage sounds good, US job creation slowed under Trump in 2019 to the lowest growth in 8 years.

The New York Times adds, After a Decade of Hiring, Plenty of Jobs but Raises Are Tiny:

One discouraging piece of the Labor Department’s monthly report was anemic wage growth. “It’s easier to get a job than a raise in this economy,” said Diane Swonk, chief economist at Grant Thornton.

Consumer spending is a pillar of the economy, and it depends on income growth. Over the past 12 months, wages grew just 2.9 percent. That was substantially below the 3.3 percent average in 2018.

“Something that the Fed has been humbled by is how little wage acceleration there’s been,” Ms. Swonk said, referring to the Federal Reserve. 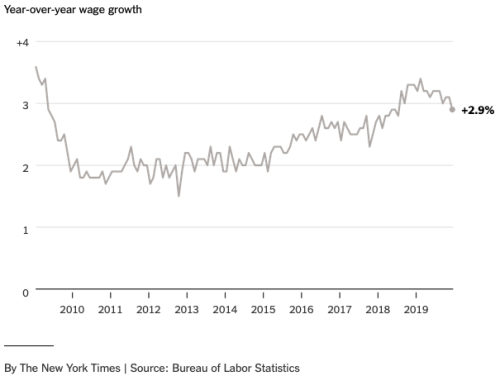 Limp wage growth is puzzling when the jobless rate has settled at 3.5 percent, a half-century low.

The Economic Policy Institute reported, Inequality Is Rising as Workers Are Increasingly Cut Out of the Economic Returns to Productivity Growth. At the same time, the Wealth Of World’s 500 Richest People Grew 25% This Year. The Post’s Robert Samuelson opined, 2019 was the year of inequality. The Times’ Paul Krugman opined on Big Money and America’s Lost Decade.

Despite an economic recovery that lifted people out of poverty in most areas of the country, poverty increased in at least one county in every state between 2016 and 2018. Poverty Grew in One-Third of Counties Despite Strong National Economy:

The poverty rate grew in 30% of counties between 2016 and 2018, according to a Stateline analysis of U.S. Census Bureau county estimates released this month … The counties with the biggest jumps in poverty ranged across the political and demographic spectrum: from 97% white and solidly Republican-voting Carter County in Kentucky to black-majority, Democratic Bullock County in Alabama.

Most of the biggest increases were in areas both rural and Southern. Those areas generally had residents who lacked job training and skills and industries that suffered downturns.

The gap between the richest and the poorest in Arizona has grown wider over the past five years, according to data released by the U.S. Census Bureau. Income gap widens: 20% of households have 50% of Pima County’s wealth.

Axios reported this week, Survey: Top executives are pessimistic about the 2020 economy:

Chief financial officers are bracing for an economic slowdown this year, according to Deloitte’s quarterly survey of nearly 150 executives at top North American companies. 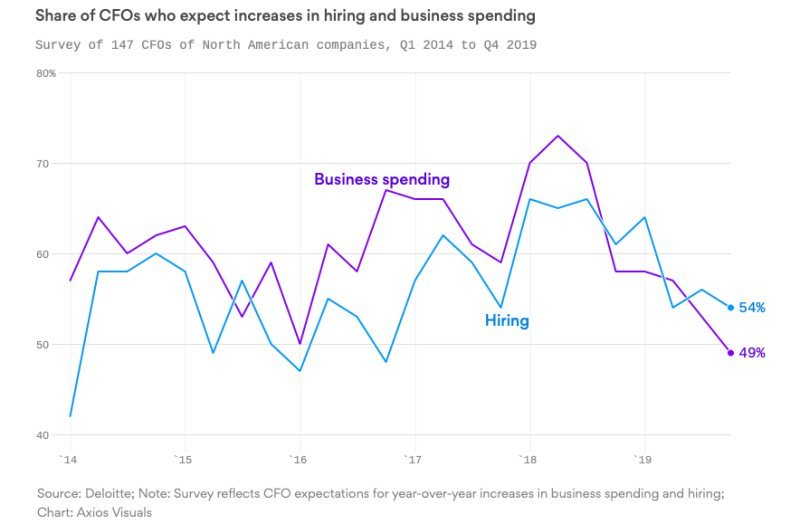 Why it matters: Multiple surveys showed plunging optimism among top executives last year, thanks largely to trade war uncertainty. Deloitte’s survey is a signal that skittishness continues to curb companies’ hiring and spending plans this year, which could further hurt economic growth.

Details: Expectations for a U.S. downturn have jumped since the beginning of 2019, with 97% of CFOs saying that a downturn (either a slowdown or a recession) has already begun or will occur by the end of 2020. Compare that to 88% who said the same about 2020 in the first quarter of last year.

And this warning bell back in November: As it nears a record $10 trillion, corporate debt poses new risks to U.S. economy:

Little more than a decade after consumers binged on inexpensive mortgages that helped bring on a global financial crisis, a new debt surge — this time by major corporations — threatens to unleash fresh turmoil.

A decade of historically low interest rates has allowed companies to sell record amounts of bonds to investors, sending total U.S. corporate debt to nearly $10 trillion, or a record 47 percent of the overall economy.

The danger isn’t immediate. But some regulators and investors say the borrowing has gone on too long and could send financial markets plunging when the next recession hits, dealing the real economy a blow at a time when it already would be wobbling.

Amid the avalanche of debt, the sharp growth in lower-quality corporate bonds, just one notch above junk, represents a special concern. Investors hold nearly $4 trillion in these bonds, including $2.5 trillion from U.S. companies, according to the credit rating agency Standard & Poor’s.

Since Oct. 1, familiar names like Hasbro, Nordstrom, Marriott and Hyundai all have tapped investors for cash by selling near-junk bonds that S&P labels “BBB.”

This low-quality corporate debt bulge, by itself, is unlikely to cause a recession, according to economists and investors. But it could make the next one much worse.

“It did not matter that interest rates went lower than a snake’s belly for corporations. There is a floor below which they will not charge a lower rate” for consumers, said David Robertson, publisher of the Nilson Report, an industry newsletter. “Even if the Fed lowers rates again, consumers aren’t going to get relief.”

Despite President Trump’s repeated insistence that the U.S. is “taxing the hell out of China,” the truth is American Consumers, Not China, Are Paying for Trump’s Tariffs:

American businesses and consumers, not China, are bearing the financial brunt of President Trump’s trade war, new data shows, undermining the president’s assertion that the United States is “taxing the hell out of China.”

“U.S. tariffs continue to be almost entirely borne by U.S. firms and consumers,” Mary Amiti, an economist at the Federal Reserve Bank of New York, wrote in a National Bureau of Economic Research working paper. The other authors of the paper were David E. Weinstein of Columbia University and Stephen J. Redding of Princeton.

Examining the fallout of tariffs in data through October, the authors found that Americans had continued paying for the levies — which increased substantially over the course of the year. Their paper, which is an update on previous research, found that “approximately 100 percent” of import taxes fell on American buyers.

The findings are the latest evidence that voters and American businesses are paying the cost of Mr. Trump’s penchant for using tariffs to try to rewrite the terms of trade in favor of the United States.

The United States and China have reached a trade truce and are expected to sign an initial deal this month, but tariffs on $360 billion worth of Chinese goods will remain in place.

“We find that tariff increases enacted in 2018 are associated with relative reductions in manufacturing employment and relative increases in producer prices,” the economists concluded.

“While the longer-term effects of the tariffs may differ from those that we estimate here, the results indicate that the tariffs, thus far, have not led to increased activity in the U.S. manufacturing sector,” according to the research.

The index came in at 47.2 in December — worse than the 49 economists expected — falling 0.9 points from the prior month’s reading. (Any reading below 50 suggests the manufacturing sector is in contraction.)

Respondents to the survey, which manufacture goods in 18 different industries, noted sluggish demand for products, as well as suppliers passing tariff-related costs on to manufacturers.

Preliminary job numbers released Friday show that the year-over-year shift in manufacturing jobs was lower in December than in the first two years of Trump’s administration. It was the second-slowest year of growth for manufacturing since the great recession. Magic wand or not, manufacturing employment is at its lowest density on record:

The number of jobs still grew, up by 46,000 relative to December 2018. But the economy overall grew faster. Since the end of the recession, the density of manufacturing jobs in the economy has been flat. But from October to December, that density was lower than it has been at any other point on record, dropping below 8.45 percent of all employment. In December, it was 8.44 percent, higher only than October’s 8.43 percent — when the GM strike temporarily pushed manufacturing numbers down. 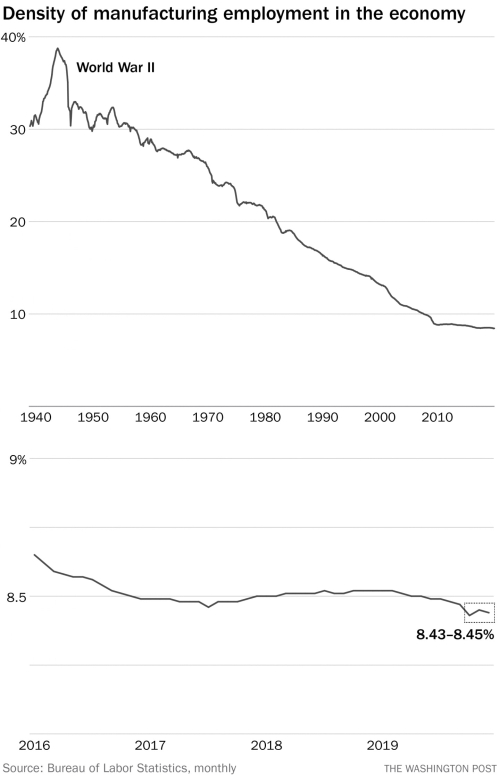 This was Obama’s point: The American economy has broadly shifted away from manufacturing, and there isn’t much Trump could do to resuscitate it, with or without a magic wand.

For the same reason, the American economy is broadly shifting towards renewable sources of energy away from coal. America’s shift from coal to renewable energy has begun:

Earlier this month, a study found that the U.S. had more capacity installed for renewable energy than coal for the first time.

Data from the Energy Information Administration showed that wind, solar and hydroelectric generated nearly 68.5 million megawatt-hours of power in April [2019], while coal only generated 60 million, Bloomberg News reported. That’s 23 percent of total electricity from renewables vs. 20 percent from coal, according to The Guardian.

“The fate of coal has been sealed, the market has spoken,” University of Texas energy expert Michael Webber told The Guardian. “The trend is irreversible now, the decline of coal is unstoppable despite Donald Trump‘s rhetoric.”

President Trump had promised to boost coal and, under his watch, the U.S. Environmental Protection Agency (EPA) has worked to ease regulations impacting the industry, most recently by replacing the Obama-era Clean Power Plan. Even so, at least 50 coal plants have shut since Trump took office in 2017, The Guardian reported.

The clearest sign yet that America’s Coal County is headed for widespread job cuts: The amount of coal being produced per U.S. miner is at the lowest level in eight years. The U.S. Coal Industry Is Expecting Another Wave of Widespread Job Losses:

Productivity has slid 11% this year alone. The last time it was this low was in 2011, when coal companies ended up cutting almost half their workers in a downturn that lasted more than four years.

Lower production means U.S. coal workers will each produce an average of about 12,700 tons this year, based on an analysis of production estimates from the U.S. Energy Information Administration and employment figures from the Bureau of Labor Statistics. That’s the second-lowest production rate in two decades.

The looming downturn comes as Trump, who vowed to rescue the coal industry by easing environmental regulations, begins his re-election campaign. Winning a second term will hinge in part on mining strongholds he carried in 2016, including West Virginia and Pennsylvania.

The moves reflect the confluence of woes pummeling the industry. Electricity producers are shunning the fuel in favor of cheaper natural gas, wind and solar. Global prices for coal shipped to power plants have plunged by more than one-third in the past year in both Europe and Asia. Met coal prices fell last month to the lowest since January 2017, and there’s little sign of a recovery.

So get a clue, pundits. The stock market is not the economy, or predictive of election results. These are the kind of economic factors that actually drive how people vote.

All The President’s Men: Lev Parnas corroborates Ambassador Gordon Sondland – ‘Everyone was in the loop’

Sen. Martha McSally lashes out at CNN reporter – feeling the...