The Trump Constitutional Crisis Has Arrived

The Trump Constitutional Crisis Has Arrived

Let me be the first to say, if Trump releases the Mueller Report in full, I’m dead wrong about most of what I’m saying. I hope that happens, and that I’m just wrong. But if Trump doesn’t release the Report and starts to make excuses, the crisis is coming.

The Mueller Report will be the fulcrum of the crisis, of course. That much should now be clear to anyone paying attention.

Already it has been a week without the Administration releasing the Mueller Report – and they never will. Trump cannot release the Report to the Congress or the public, as it contains a detailed factual account of how he and his campaign coordinated and conspired with the Russians in their attack on our democracy and then took definite actions in attempt to obstruct the investigation.

We will learn this much in due course when Mueller eventually testifies in public before Congress and blows the lid off the Barr cover-up. That’s when the crisis will really ramp up.

Barr’s summary was a whitewash; the Report is political kryptonite and can never be released without permanently crippling Trump’s Presidency. So they won’t. Ever. It might be true that Mueller decided that Trump’s actions did not rise to the evidentiary standard required to indict Trump, as Barr claims, or Mueller may have concluded that he could not indict a sitting President, but the House would happily commence an impeachment inquiry (even if they don’t call it that…) on all the evidence Mueller has collected over the past 22 months. 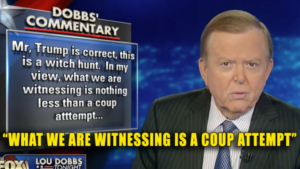 Why do you think that Trump’s flying monkeys are calling for investigating the investigators? Why do you think the Trumpsters’s echo chambers are ringing with charges that the whole investigation was an attempted coup? They know they might be at the end of the line, and they are flailing for any angle that might help them chum the waters and survive the Mueller Report. They know what will happen if it’s released, and they are testing out a defense in case the Report is leaked: the whole Report is a deep state conspiracy to unseat the President and you, Mr. and Mrs. America, must stand up and defend the President against this unconstitutional conspiracy of spies, leakers, and Clinton/Obama liars. His base are eating that up with a spoon. And Trump will use the “coup” to justify larding the Federal law-enforcement bureaucracy with stooges who will protect him. 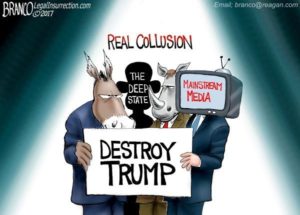 Congress has demanded the Report, but gotten only silence and excuses. Congress may subpoena it, but will get stonewalled. The Courts may order it released, but Trump will stand fast and try his luck in his newly-packed Supreme Court. Perhaps he may try to release only non-damaging fragments of the Report. He will assert executive privilege, Grand Jury secrecy, classified status, anything, to withhold the worst of it. He cannot release it, because it will end his Presidency. So he won’t. I don’t think this stance is ultimately sustainable for the next two years, but I’ve underestimated Trump before.

Trump’s currently testing how far he can push his “emergency” powers by making noises about “closing” the Southern Border. If he can get away with that, he’ll really be unleashed to try creative solutions to his problems. 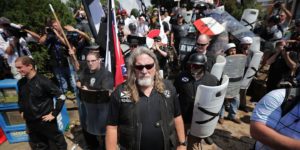 Such a stand-off between branches of our co-equal government branches is the very stuff of Constitutional crises. At minimum, it will end with the public in the streets and a massive confrontation within our system of government that no one can predict how it might end. It might even result in violence from the very far-right criminal element among whom Trump has inspired a spike of White Nationalist terrorism in this country.

This confrontation over the Mueller Report will either end the Trump Presidency, or break our Constitutional system of government.

I can’t guarantee that our current House and Senate have what it takes to face down an unleashed and irresponsible President. It is possible that the confrontation will just drag on into the 2020 election, which would then become a referendum on whether the President has to continue following the Constitution; if Trump wins, he essentially becomes a dictator, if he loses, he’s going to jail. Not because of the Mueller Report, but because of his decades of lawless behavior that is now catching up with him in Courts across the country. He can’t afford to stop being President, because law enforcement is nipping at his heels. Michael Cohen’s testimony warning that we may never see another peaceful transfer of power might become a Cassandrian prophecy.

However the Constitution crumbles, one thing is for sure, the crisis is here and we’ve got to recognize that and prepare to back the forces of Constitutional governance in the coming confrontation.