Update: Deutsche Bank tells the court it has some Trump tax returns (Updated)

Update: Deutsche Bank tells the court it has some Trump tax returns (Updated)

Deutsche Bank and Capital One were given until Tuesday afternoon to tell a New York appellate court if they are in possession of President Trump’s tax returns, according to a court order issued on Monday. Court Orders Deutsche Bank, Capital One to Disclose Whether They Have Trump’s Tax Returns. If the two banks cannot answer the question by Tuesday at 4 p.m., they will have to explain why “in detail[.]”

Deutsche Bank, in a redacted letter, complied with the the court’s order today. CNN reports, Deutsche Bank has tax returns but doesn’t say if they are Trump’s:

Deutsche Bank wouldn’t say publicly on Tuesday whether it has President Donald Trump’s tax returns. Yet the bank acknowledges the US House would see people’s tax returns — possibly even those of Trump family members — if the bank fulfilled a subpoena related to Trump, according to a letter from the bank (.pdf) to a federal appeals court on Tuesday. 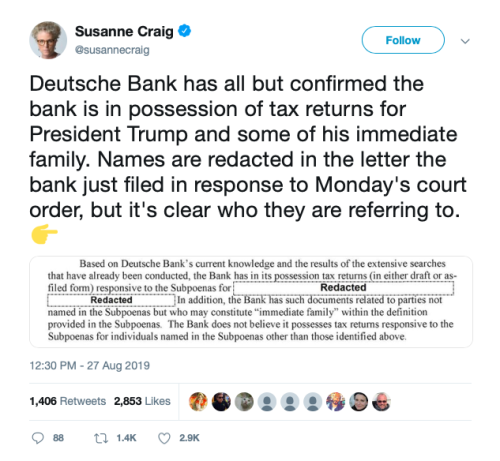 Capital One, separately, tells the court it does not have tax returns that would fall under the House’s April 2019 subpoena related to Trump.

It’s still not known whether the appeals court will allow the names in Deutsche Bank’s letter to stay secret.

The bank, in its filing Tuesday, argued that there are “statutory, contractual, and privacy concerns” that have made it reluctant to name whose tax returns it has that would fall under the spring 2019 House subpoena.

Trump appealed a lower court ruling that upheld the subpoena in May, after a district judge told personal attorneys for the President that their case was not “serious.”

No word on when the New York appellate court is expected to rule. Expect another appeal to follow, however, as Trump tries to run out the clock.

UPDATE: MSNBC’S Lawrence O’Donnell reported Tuesday night that a source close to Deutsche Bank has contacted him regarding the Trump financial records. O’Donnell cautioned that he has a single source, not yet verified by other sources or documents, but “if true” this would be explosive news.

He then described how he came to that conclusion, then continued:

“The subpoenas in question are from the House Intelligence committee and House Financial Services committee. Those committees told the court they have subpoenaed Trump family financial records and tax returns from Deutsche Bank as part of an investigation of Russian money laundering and potential influence on the president. The information publicly disclosed today by Deutsche Bank is so far consistent with what a source close to Deutsche Bank has revealed to me about the Trump-related financial documents in Deutsche Bank’s possession.

“The information the source has revealed to me is also consistent with New York Times reporting tonight saying, quote, ‘Current and former bank officials have said Deutsche Bank has portions of Mr. Trump’s personal and corporate tax returns from multiple years as part of the reams of financial data it has collected over its two-decade relationship with him. The information revealed to me goes a few very important steps beyond that.

“Got to stress ‘if true,’ but if true, the reporting that you have your source, it’s the skeleton key, right, that opens -— picks the lock on so many fundamental mysteries of the Trump era, the ones we thought Robert Mueller was going to answer and we now know the reason that Robert Mueller didn’t answer them, all the connections, the nexus with Russia on a million levels, political, financial, security, everything else, criminal potentially, was because he was basically told he couldn’t look at this stuff,” Heilemann explained. “This was the stuff he wasn’t allowed to go for. He couldn’t go looking for the skeleton key.”

“So now if we have the skeleton key, it picks a lot of locks and answers a lot of questions and also puts Trump in a very difficult place politically, partly because we’re barrelling towards a re-election campaign and we’re also on the clock for the impeachment hearings. We also know it’s almost Labor Day. We know decisions have to get made,” he continued.

“And in this narrative, this moment, if the skeleton key suddenly were to emerge, it would, I think, make impeachment proceedings absolutely inevitable starting this fall,” he added.

MSNBC host Lawrence O’Donnell on Wednesday retracted a story that alleged that Russian billionaires “close to Vladimir Putin” had co-signed a loan that was given to President Trump by a foreign bank. The brief report, which O’Donnell credited to a single source when it aired Tuesday night, led to the threat of a lawsuit by the president.

On Wednesday, O’Donnell opened “Last Word with Lawrence O’Donnell” by saying his reporting had not gone through the network’s verification and standards process and he was wrong to repeat the allegations on air and for posting it on Twitter.

The previous night, O’Donnell had stressed that the report was unverified, noting that it would be a big deal “if true.” “I have not seen any documentation from Deutsche Bank that supports this and verifies this. This is just a single source who has revealed that to me,” he said.

He later noted that it was not confirmed by news reporters at MSNBC’s parent company, NBC. The next night, he said “saying if true” was “simply not good enough.”

“Tonight we are retracting the story,” he said Wednesday. “We don’t know whether the information is inaccurate but the fact is we do know it wasn’t ready for broadcast and for that I apologize.”

Earlier on Wednesday, Charles Harder, a lawyer for Trump, had sent a letter to NBC demanding that it “immediately and prominently retract, correct and apologize” for the report, which it said was “false and defamatory.”

MSNBC host Lawrence O’Donnell has already retracted his claim that Russian oligarchs co-signed Donald Trump’s loans with Deutsche Bank—but the Trump family clearly don’t think that’s enough. Eric Trump, executive vice president of the Trump Organization, tweeted late Wednesday that the company will take O’Donnell and MSNBC to court over his claims. “This was a reckless attempt to slander our family and smear a great company,” wrote the president’s son. “Apologies are not enough when the true intent was solely to damage and cause harm. As a company, we will be taking legal action. This unethical behavior has to stop.”

A lawsuit would allow Lawrence O’Donnell to conduct discovery, i.e., to obtain all of the Trump financial documents in Deutsche Bank’s possession to attempt to prove the point he asserted. So please, proceed, you idiot.