What the Arizona GOP fears most: becoming California

What the Arizona GOP fears most: becoming California

Republican California governor Pete Wilson in 1994 pushed hard for California Proposition 187 which prohibited illegal immigrants from using non-emergency health care, public education, and other services in the State of California.

Three days after Proposition 187 was approved by voters, on November 11, federal district court judge Matthew Byrne issued a temporary injunction against the state of California, forbidding the enforcement of Prop 187. Federal judge Marianna Pfaelzer then issued a permanent injunction, which California did not appeal and it remains in effect.

This was the defining moment when California began to shift from the state that gave us Richard Nixon and Ronald Reagan into a Democratic stronghold. Proposition 187 Turned California Blue.

In the wake of a near-political annihilation in California that has left even longtime conservative stronghold Orange County bereft of a single Republican in the House of Representatives, a growing chorus of GOP loyalists here say there’s only one hope for reviving the flatlining party: Blow it up and start again from scratch.

That harsh assessment comes as Republicans survey the damage from the devastation of a “blue tsunami” in California which wiped out five GOP-held House seats — with more still threatened — while handing every statewide seat and a supermajority to the Democrats in both houses of the state legislature this week.

UPDATE: With the election of Gil Cisneros to the seat held by the retiring Representative Ed Royce, Democrats have captured six Republican seats in California. A Democratic Rout in Orange County: Cisneros’s Win Makes It Four. 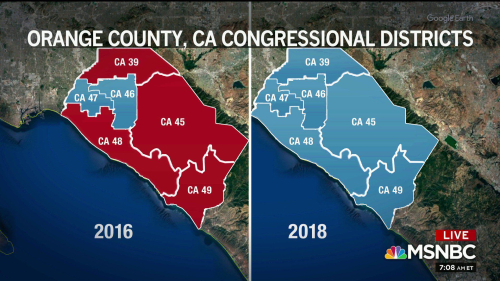 “I believe that the party has to die before it can be rebuilt. And by die — I mean, completely decimated. And I think Tuesday night was a big step,’’ says veteran California GOP political consultant Mike Madrid. “There is no message. There is no messenger. There is no money. And there is no infrastructure.”

Republicans like Madrid also mourned another low point this week: the defeat of Southern California Assemblyman Dante Acosta, marking the demise of the last GOP Latino legislator — in a state where Latinos comprise the fastest-growing electorate.

GOP strategist John Weaver, who has worked California races and also has represented the presidential campaign of Ohio governor John Kasich, seconded Olsen’s view, tweeting that the effects of the Trump presidency have doomed any chance of resurrection. “In one fell swoop Trump & Republicans who willingly handcuffed themselves to him have turned Orange County into a GOP wasteland,’’ he tweeted this week. “You want to see the future? Look no further than the demographic death spiral in the place once considered a cornerstone of the party.”

Madrid argues that many California Republican leaders remain in complete denial of the fact that their continued support of Trump presidency has sealed the fate of the GOP — and last week’s midterm elections revealed the true extent of the GOP’s rot in California, where the state party has now shrunken to third party status.

“Now, it’s just open warfare. The barbarians have broken through the gates. The army is in full retreat,’’ said Madrid, who adds there’s no hope left for a party that for years has been on a path toward destruction. “Burn it to the ground. I want to reconstitute.’’

Republicans looking at the ashes of the midterm results say they must envision what a new party will look like — after the current structure and its leadership has been entirely disassembled.

For some, the answer is to double-down with Trumpism, the newAmerican fascism.

Already, a leading pro-Trump Republican voice — former gubernatorial candidate Assemblyman Travis Allen, a far-right conservative who fully supports the president’s wall and immigration policies — has kicked off his campaign to head the state GOP, announcing that it’s time to “take back California.”

But a growing number of Republicans in the party’s #NeverTrump wing — which includes prominent strategists like Rob Stutzman and Luis Alvarado — insist that a new beginning will rely heavily on a full-throated repudiation of Trump’s caustic divisiveness. They believe the rebuilding process could require years, if not generations, to rid the state GOP of the taint of a president who is blamed for ramping up anti-immigrant sentiment in a state that is home to more immigrants than any other in the country.

Madrid cites the recent gubernatorial contest in which Republican nominee John Cox, who described himself repeatedly as a “Jack Kemp” Republican, pushed for Trump policies that are abhorrent to many Californians.

“It is completely unfathomable … for a Republican nominee to run on building a wall,’’ said Madrid, a nationally recognized expert on Latino voting trends who noted that the party has spent 20 years trying to extricate itself from the damage done by Prop. 187, the anti-illegal immigration ballot measure that eviscerated Latino support in the state. “And everyone acts like it’s normal … Cox was running on that, in California. Are you out of your mind?”

Democratic political strategist Darry Sragow says if the party continues on its current path, its complete disintegration is entirely predictable.

“They’re down to 24 percent registration. And the reason is that they have a huge deficit with Latinos, with African Americans…and with Asian Americans. And they now have a deficit with whites,’’ he said. “You’re talking about a party where 77 percent of Republican likely voters in California are white. And the population that’s white here is 39 percent.”

His advice: “They have to take down the ‘whites only’ sign from the clubhouse door,’’ Sragow says. “And if they’re willing to allow people who aren’t white into the club, they may be able to recover.’’

“I think that the GOP is capable of turning itself around, because it’s a well-established brand,’’ he said. “The problem is, the people who manage the party are going to have to be willing to do that. And by definition, they are the opposite of that. They have no interest in that.” 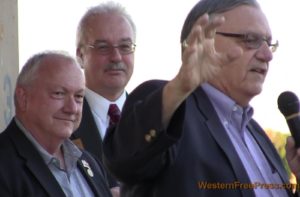 The Arizona GOP followed the same path as the California GOP a decade later in 2004 with the anti-immigrant hysteria of Maricopa County Sheriff Joe Arpaio, state Representative Russell Pearce with his Prop 200, which restricted illegal immigrants’ access to state services and sponsored Arizona’s employer sanction law, and which suspends or revokes business licenses if employers knowingly hire illegal immigrants, and Pearce acolytes like Representative John Kavanagh, co-author of S.B. 1070 and bills to deny birthright citizenship guaranteed by the 14th Amendment Arizona bill would deny citizenship to children of illegal immigrants, disgraced former Maricopa County Attorney Andrew Thomas, former governor Jan Brewer, and a host of other GOP politicians too extensive to list here.

The Arizona GOP continues to run campaigns based on anti-immigrant hysteria and the border, including this year’s election. And every GOP candidate has a line in their stump speech derisively mocking California. But this false bravado masks their fear of becoming California, and presiding over the death of the Arizona GOP.

This year’s election results may finally mark the beginning of the gradual shift to a “blue” Arizona. It took 24 years in California. It has only been 14 years since Prop. 200 in 2004 in Arizona.

UPDATE: Democrats riding a wave of anti-Donald Trump fervor in Nevada made a forceful comeback to the Legislature on election night, seizing the powerful majority position in both chambers and more than reversing the heavy losses from 2014 that they vowed never to repeat. ‘Blue wave’ sweeps Democrats back to control in Nevada Legislature. They also won the governorship and U.S. Senate seat.

In New Mexico, an entire state government turned blue in a sweep propelled by local activists who had been building toward their goal for years. A formerly Republican-controlled, purple state, New Mexico flipped control of the governor’s mansion, as well as key posts including the land and water boards, which had been dominated by the oil and gas industries, and are now controlled by environmentalists. The state supreme court also changed hands, turning from conservative to progressive. The Blue Wave Keeps Rolling On.