Hamed is an employment specialist at SAAVI Services for the Blind and is a former aide to CD 3 Congressman Raul Grijalva. 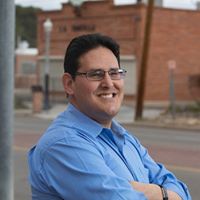 There is a 4 way race in the Democratic primary for the Ward 1 Council seat. Also running are businessman Rob Elias (a political newcomer), consultant Miguel Ortega (former Chief of Staff for Ward 3 Councilmember Karin Uhlich), and former Ward 1 Senior council aide Dr. Lane Santa Cruz.  Both Hamed and Ortega ran unsuccessfully for political office before in 2010. Hamed ran for LD 27 House, and Ortega for TUSD Governing Board.

The winner of this Democratic primary in Ward 1 may face off with Republican write-in candidate Sam Nagy, who needs at least 84 votes to qualify for the General Election.

And if you want to view the video of the Star’s editorial board interview of all 4 candidates on July 19, here’s the video link: https://www.facebook.com/ArizonaDailyStar/videos/2358314467814959/