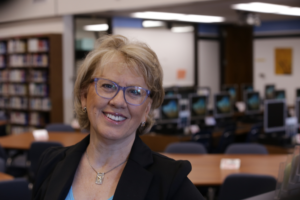 Judy Schwiebert hopes to be one of the incoming Arizona Democratic Freshman class in 2021 when she wins a seat to the Arizona State Legislature in the 2020 elections from Legislative District 20.

Legislative District 20, which includes parts of Phoenix, Moon Valley, and Glendale has been in Republican hands since its formation in 2012. Democrats have been competitive in most of the election cycles, coming within striking distance of taking at least one of the House seats in 2018.

The current Legislative District 20 Republican Representatives are Anthony “Bad Cop” Kern and Shawnna “I finally found a district that will take me” Bolick.

In contrast, Judy Schwiebert has spent her life in the LD20 neighborhood as a mom, teacher and community leader. She raised two sons as a single mom there, taught in the Glendale Union High School and Peoria Unified School Districts for 27 years, volunteered in the Paradise Valley schools, and was a co-founder of Theater Works, the westside’s community theater.

As for so many other educators, it was the 2016 election that motivated her to get more involved in politics. She co-founded the issues-based Desert Progressives Indivisible which she grew to over 1,000 activists concerned about threats to their healthcare, voting rights, environment, public schools, and more. Through that work, she became especially concerned about the state legislature’s failure to listen to people’s concerns, especially their repeated demands to invest in our public schools.

Meeting at Luci’s at The Orchard, Ms. Schwiebert sat down and responded to questions about her qualifications for office and the goals she intended to pursue if she is elected.

The questions and Ms. Schwiebert’s responses are below.

“I grew up here in Arizona where my dad started out as a shop teacher and supported our family of five on his teaching salary. He really taught me the value of hard work and inspired me with his passion for education. So, I became a teacher myself – and even after becoming a single mom, managed to support us doing the work I loved. More recently, though, while volunteering with a master second-grade teacher, I learned that she had to work four jobs to make ends meet. She finally left Arizona for a much higher paying teaching job in another state. And she’s not the only one. Children in over 1600 Arizona classrooms had no permanent qualified teacher last year. That is tragic. As a mom and grandmother, that breaks my heart. We’re losing the potential of a whole generation of young people – and risking our community’s economic future, too. We need to put our families first

“First, as a teacher, I’ve spent my life working with others to get things done. Second, I’m smart enough to know that I don’t know everything, and so we need to listen to each other to solve our challenges. Also, both my parents taught me the value of persistence and hard work. My dad was that guy who could fix anything. He taught me to roll up my sleeves and work as long as it took to get the job done. I know that when we work together, we can make Arizona a place where everyone thrives.”

“First, this district is my home. I’ve lived, worked, volunteered and attended church here all my adult life. I’m listening to my neighbors, not outside interests, and am committed to representing us and fighting for our families. Secondly, both my opponents have proudly called themselves ideologues and said they shouldn’t be working with others. In fact, one of them in particular (Kern), has been a real obstructionist. As chair of the rules committee, he’s killed many bills that would have helped our families because he didn’t personally like the legislation. For example, during the last session, he blocked the Dignified Changes bill to provide adult-sized changing tables in newly built government buildings. Eventually, a bipartisan group of representatives managed to get it around his committee to the floor, and it passed almost unanimously. We send our legislators there to represent us and work together for the people of Arizona, not follow their own personal allegiance to outside groups.

“I’m a smart, hardworking teacher with deep roots in this district. I’ve been listening – and will continue to listen to my neighbors. I hear that people are fed up with our state’s failure to invest in our public schools and put our families first. I’ll work hard with others to make sure that everyone in Arizona has the chance to thrive.”

During the most recent session in the Arizona State Legislature, Representatives Bolick and Kern voted for a budget that shortchanged education and aid to the most vulnerable in favor of more tax cuts. They also voted for reducing the minimum wage for full-time students.

In an earlier term, Mr. Kern voted for:

What part of this collective record of reactionism and backwardness would appeal to the residents in Legislative District 20?

Judy Schwiebert is a candidate that offers a forward inclusive vision that puts people first.

Voters should consider her qualifications and positions on the issues when considering who to vote for in November 2020.