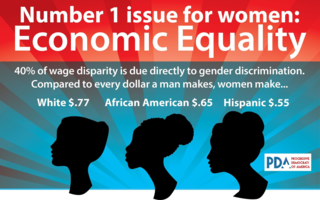 Equality of rights under the law shall not be denied or abridged by the United States or by any state on account of sex.
– Equal Rights Amendment

There is an ideological perfect storm brewing in the Arizona Legislature. A memorandum supporting extension of the ratification deadline for the Equal Rights Amendment (ERA) has been assigned to a committee where five out of seven members have pledged to protect and fight for the rights of fetuses over the rights of women.

Not content with winning the right to vote in 1920, women’s rights advocates proposed the Equal Rights Amendment (ERA) 91 years ago. The ERA was introduced during every Congressional session between 1923 and 1972 and finally passed nearly 70 years after it was originally proposed. In the 1970s, there was a ground war at the state level to get 38 state legislatures to ratify the ERA in order for it to become a Constitutional Amendment. The ERA fell 3 states short of ratification; Arizona is one of a handful of states that never ratified the ERA.

Fast forward to 2013, the ground war for women’s equality has resumed at the state level with ERA ratification proposals six states– Florida, Illinois, Louisiana, Missouri, Virginia, and now … Arizona.; Nevada and North Carolina plan to hear it in 2014. LD9 Rep. Victoria Steele has introduced HCM2006, a memorandum from the State of Arizona asking the federal government to extend the deadline for ratification of the ERA, and HCR2016, a fill to ratify the ERA.

In addition to Steele, the ERA memorandum has 18 co-sponsors– including two Republican women, Kelly Townsend (LD14) and Karen Fann (LD1). Below is the complete list. Although Southern Arizona is well-represented on this list with Steele, Wheeler, Gabaldon, Saldate, and Pencrazi, where are the rest of the Democrats and the “moderate” Repulbican? (Should I name names, or can you figure out who’s missing here? If you live in LD9, LD10, LD2, or LD3, you might want to ask your representatives and senators why their names are missing from this list.)