Gloves and hankies: Lessons from the 1918 flu pandemic 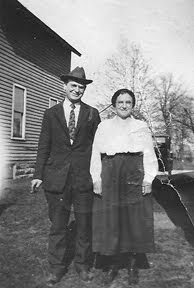 NOTE: I am re-posting this old story as a public service. There is some nasty shit... flu... out there now.

You see both of my grandparents lost their first spouses to the flu or complications from the flu. Grandma had two sons, and Grandpa had one. After they married in the early 1920s, they had two daughters, my aunt and my Mom. They built an early yours-mine-and-ours family and a 50+ year marriage on the tragedies of the largest pandemic in US history.

According to my Mom, Grandma was relieved that her first husband Charlie didn't have to go to World War I but was devastated when he died from the flu just a few years later. Lessons from the flu stayed with my Grandma her entire life. Learn Grandma's tips after the jump.

Blogging the DNC2012: The inside scoop from the Tucson Progressive

Want the inside scoop on blogging the Democratic National Convention in Charlotte? The parties? The people? The protests? The politics?

Check out my interview on The Lou Show.

If you want to hear my pearls of wisdom in person, come to the Laughing Liberally Tucson Comedy Showcase on Tuesday, September 18 at Casa Vincente. The show starts at 7 p.m.

Here I am with Arianna Huffington, a very gracious lady, and Krzystzof Piotrowski, another Huffington Post Off the Bus blogger, at the Huffington Post Oasis at the DNC. You can hear my interview and see part of his video after the jump.

The Tucson Progressive is covering Democratic Convention for Huffington Post!

Back in February, the Huffington Post launced a contest to send a group of citizen journalists to the upcoming Democratic and Republican Conventions.

The winners were announced this morning. Eight people were selected-- four for each convention.

Here is the announcement from Arianna Huffington.

After the jump is my video submission. Besides touting my qualifications in the two-minute video, I made a sentimental appeal. As a journalism student at Ohio State, I covered the 1972 McGovern-Shriver race for the Ohio State Lantern. My j-school partner and I  traveled in the press bus with the national media-- which was a trip because we were the only women on that bus except for a reporter from Time Magazine. Anyway, although Brigid and I wrote about the campaign, we never got to go to the convention that year. Forty years later, I'm going to the convention. :D So excited.

Progressive activist and humorist Jim Hightower  was in Tucson recently to stump for Congressman Raul Grijalva.

Hightower and Grijalva spoke and mingled at an intimate gathering at former City Councilwoman Nina Trasoff's house before heading to The Loft for a more formal event. (See the video below, after the jump.)

Grijalva is one of the most liberal members in the US House of Representatives, a co-chair of the Progressive Caucus, and one of the Congressional candidates being backed by Progressive Democrats of America (PDA). Grijalva-- who has been an outspoken proponent of the People's Budget (as opposed to the corporatists' budget), immigration reform, universal healthcare, and protecting the environment-- is facing two primary opponents, both backed by Rosemont Mine. (This is reminiscent of the recent Tucson mayoral race. Republican Mayoral Candidate for the 1% Rick Grinnell was bankrolled by Rosemont Mine also. Luckily, Mayor Jonathan Rothschild-- pro-water and anti-mine candidate-- beat him handily.) Hightower, who is known for his newsletter The Hightower Lowdown and witty commentary on KXCI, is a member of the PDA board and a strong supporter of the new progressive movement in the US.

As always, Hightower was a delight. Here are a few gems from his presentation at The Loft.

Hightower on Congress: The water won't clear up until we get the hogs out of the creek.

Hightower on Democrats: Some dems are weaker than Canadian hot sauce.

Hightower (who hails from Austin, Texas) on Rick Perry: Rick Perry put the "guber" in gubernatorial.

Hightower on the 99%: It's not charity we want. It's economic and social justice.

Hightower on corporate money and PACs: It's not Raul Grijalva they're after -- it's you.

Video footage and more photos after the jump.

The Tucson Progressive vs The Three Sonorans (video)

The Three Sonorans took issue with my last article stating that my headline was in error. In his answer song article, he says that he has not "joined" FOX News; they merely posted one of his stories. (I'm assuming after he submitted it to them.)

Doesn't that imply some sort of collusion with the dark side, since FOX's whole raison d'etre is to shill for the 1%?

He also vehemently denied that he was trying to discourage voting in the CD8 special election and said he already voted. OK, so I took the bait and looked at the online image of his ballot... curious to see who he voted for since he said he wasn't voting for either Jesse Kelly (AKA evil) or Ron Barber (AKA the lesser of 2 evils, according to the 3Sons). Who did he vote for? "Nana Freida de Mexicans". Hmmm...you can draw your own conclusions: Does it appear as if he is encouraging people to throw their vote away?

At any rate, the exchange reminded me of this video...

Check it out by clicking on the jump link.