“On November 5, the Tucson Desert Art Museum will open three related exhibitions on the removal and incarceration of people of Japanese ancestry after the bombing of Pearl Harbor.  President Roosevelt ‘s signing of Executive Order 9066 (February 19, 1942), authorized the government to forcibly exclude all people of Japanese ancestry from designated military areas along the west coast. Nearly 120,000 people, two-thirds of whom were American citizens, were removed and detained in government facilities scattered across the U.S.”

Please join TDART for a sneak peak of these shows on November 4th (5 to 7:30 p.m.) before they officially open to the public on November 5. Light refreshments will be served.  7000 E. Tanque Verde Rd. Tucson.
Museum Members: free
Non-Members: $7

The three exhibitions are listed below: 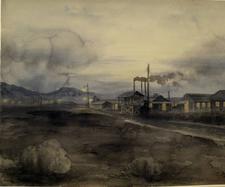 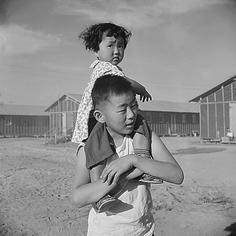 “GAMBATTE! Legacy of an Enduring Spirit is the first body of work devoted to capturing the past and the present of Executive Order 9066 through photographs and oral histories. Through the juxtaposition of historic images and contemporary portraits of the same individuals or their descendants, Kitagaki takes us on a visual exploration of the Japanese concept of Gambatte, or triumph over adversity.”

“This exhibition that examines the federal internment facilities in Arizona. This exhibition also includes photos and details of the Japanese American men and  women who served during WWII.”

Art of Circumstance: Art and Artifacts Created by Japanese Americans Incarcerated During WWII

“Art of Circumstance displays the inventive and creative spirit of the Japanese Americans incarcerated in relocation camps across the Southwest during World War II. The art and artifacts displayed in Art of Circumstance include objects on loan from the Arizona Heritage Center, Arizona Historical Society in Tempe, Arizona.”

Carolyn’s note: My family was directly affected by E.O. 9066 as my father Francis Sueo Sugiyama was a dental student at the University of Southern California when Pearl Harbor was attacked. Thereafter he and 8 other students were expelled by USC only because they were Japanese American. Dad told me he heard about the camps coming, so he got a voluntary pass from the military and fled to Chicago. A Jewish woman in L.A. kept his belongings for him, and shipped them to him later. He spent a year/half in Chicago safely taking classes at Loyola Univ. which did not discriminate against him, and then he reapplied to dental school at U. of Maryland which he did graduate from in 1946.

Years later when I was a young lawyer I joined the Capitol Hill staff of U.S. Senator Dan Inouye (D-Hawaii).  I was the Legislative Aide who wrote the legislation (S. 1647) and helped push through the bill that created the National Commission on Wartime Relocation and Internment of Civilians. The Commission held hearings all over the U.S. and concluded that indeed, a wrong had been done to the Japanese American population during WWII.  They published a report entitled “Personal Justice Denied’ in Dec. 1982.