Shame on Them: 43 Members of the Former Party of Lincoln put Guilty Donald Trump over the Country

Home » Shame on Them: 43 Members of the Former Party of Lincoln put Guilty Donald Trump over the Country
Previous Next

Shame on Them: 43 Members of the Former Party of Lincoln put Guilty Donald Trump over the Country

When the record second impeachment trial of Donald Trump commenced earlier this week, I was struck by how much the first-day vote on the constitutionality of the trial reminded me of the courtroom scene from the 1962 movie based on Harper Lee’s novel To Kill a Mockingbird. 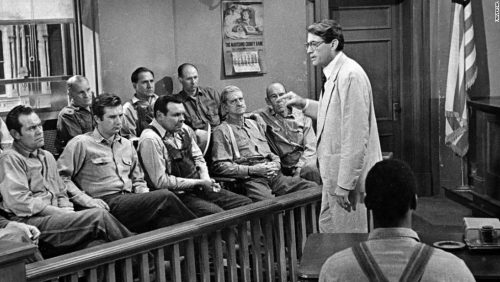 Photo from Better Living from Beowolf

In that scene, lawyer Atticus Finch (played by Gregory Peck) conclusively proved that the Black Defendant Tom Robinson (portrayed by Brock Peters) did not rape a white girl. Despite the evidence and testimony presented in court, an all-White Jury convicted Robinson.

On that first day of the trial, 44 Senate members of the former Party of Lincoln, despite historical precedent and the large bulk of the judicial scholarly opinion, voted to declare the second impeachment trial of Donald Trump unconstitutional.

Like the all-white jury in To Kill a Mockingbird, these 44 individuals did not care about the facts in front of their faces. They did not care about historical precedent. They did not care that most legal scholars vouched for the constitutionality of the proceedings. Fearing backlash from their political tribal base in the Trump Zone and Fox Island, they cowardly enabled the whims of a sociopathic ex-President and traitorously put the needs of that aspiring autocrat over the country.

Today (February 13, 2021,) 43 Senate members of the former Party of Lincoln played the same role as that all-white jury again by ignoring the facts and voting to acquit the former Chief Executive Demagogue Sociopath.

Hard to fathom. Not really given the state of the former Party of Lincoln but if readers want proof, just click below to watch Enemy of the People Mitch McConnell’s remarks after the Senate failed to convince the twice impeached former occupier of the Oval Office.

For the majority of the speech, McConnell, the consummate hypocrite sounded like one of the House Managers prosecuting the case against Trump.

He admitted that Trump was to blame for the Domestic Terrorist Attack on January 6, 2021, meticulously detailing example after example of the twice David Duke endorsed candidate’s responsibility in the affair.

Then after outlining all the reasons for Trump’s obvious guilt and expressing hope that the Justice System prosecutes him, McConnell, like the all-white jury in to Kill a Mockingbird, gave a big SO WHAT and, like his 42 judicial accomplices, hid behind the previously discredited reasoning that the trial was unconstitutional because Trump was now a private citizen.

Never mind that it was McConnell that caused the delay in the Senate trial after the House impeached Trump while he was still President.

Never mind that the Senate, in a 56 to 44 vote on the first day of the trial declared the proceedings constitutional.

In the first comments following the Senate Impeachment Trial, Majority Leader Chuck Schumer commented that the 43 members of the former Party of Lincoln who chose to enable the whims of a criminal sociopath just so to keep their political positions were guilty of “votes and infamy” and would forever be remembered in history as the people who put “Trump over the country.”

The 43 People who voted to acquit Trump today are just as repulsive as the fictional all-white jury in To Kill a Mockingbird.

More so in that, they are real.

They had a duty to dispense justice.

Instead, they put political tribalism and personal gain over the country by acquitting a man they knew was guilty.

They should all get voted out when their terms are up.