The gun worshipers and fetishists got their “Big Brother” bill, HB 2517, through the Arizona legislature.

The bill is alternatively known as the “We hate Tucson and Councilman Steve Kozachik” bill.

This overreaching bill sponsored by Rep. Steve Smith, R-Maricopa, would impose fines on cities, towns and their lawmakers who enforce gun ordinances more strict than the state’s own laws. The bill would impose a civil penalty of up to $5,000 on city and town governments that violate the statute. It would also allow the state to sue individual government officials, such as city council members, and would prohibit them from using public funds to defend themselves in court.

The Arizona Republic editorial today emphasizes that these s0-called “small government” conservatives are not, Back off, lawmakers: Cities can handle this:

Yet these same legislators are just as quick to try dictating policy to towns and cities.

From the ridiculous to the costly and the dangerous, topics that ought to be handled locally are once again being debated on the floors of the House and Senate. Gov. Jan Brewer should veto any that make it to her desk.

Start with House Bill 2517, which tells locally elected officials that voting their conscience could put them on the hook for $100,000.

The bill would punish any council member who voted for a weapons ordinance or regulation a judge later found to be at odds with state law. It would prohibit the town or city from paying for attorneys. The mayor would be subject to an automatic $5,000 fine.

This is abhorrent on so many levels. Would the Legislature be willing to fine its members who vote for bills found to be unconstitutional? Nope. It shouldn’t do the same to local elected officials.

If such a law applied to state government, the governor and every Tea-Publican legislator would have been sued several times over by the state for their frequent and repeated violations of state and federal laws, and state and federal constitutions.

Contact Governor Jan Brewer and tell her to veto this “Big Brother” bill.

How They Voted (You should note that not a single “mythical moderate Republican” voted against this overreaching gun worshiper bill): 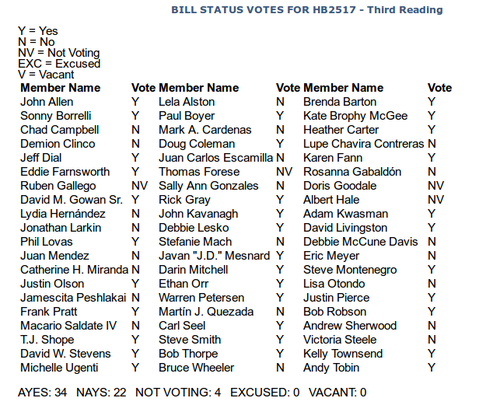 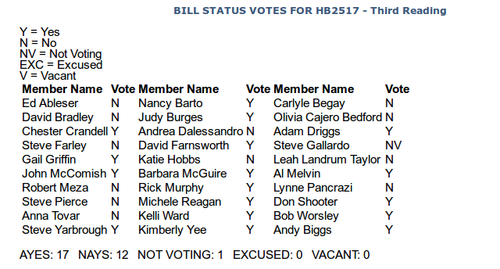