Andy Biggs and Paul Gosar say F You to the 9/11 First Responders.

Andy Biggs and Paul Gosar say F You to the 9/11 First Responders. 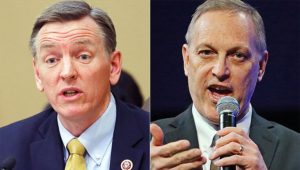 Reactionary Arizona District Four and District Five Representatives Paul Gosar and Andy Biggs do not think 9/11 First Responders deserve to be taken care of the rest of their lives. Photo from the Daily Courier.

Most people would think that passing a bill to take care of the 9/11 First Responders who are suffering from permanent injuries and illnesses stemming from their heroism that fateful day would achieve unanimous approval in both the House and Senate.

It is the only right thing to do for these brave souls.

Even the Enemy of the People-Obstructionist in Chief Senate Majority Leader Mitch McConnell has vowed to take up the bill coming from the House, commenting that:

“The first responders who rushed into danger on September 11th, 2001 are the very definition of American heroes and patriots……The Senate has never forgotten the Victim Compensation Fund and we aren’t about to start now. Nothing about our shared goal to provide for these heroes is remotely partisan. We will consider this important legislation soon.”

Well, 12 Republicans inexplicably voted against the Never Forget the Heroes: James Zadroga, Ray Pfeifer, and Luis Alvarez Permanent Authorization of the September 11th Victim Compensation Fund Act. Among those 12 reactionaries who did not think the First Responders should be permanently taken care were Arizona’s Congressional District Four and Five Representatives Paul Gosar and Andy Biggs.

Do Gosar and Biggs really think their constituents wanted them to vote against taking care of the people who sacrificed their health and lives to rescue people from the Twin Towers and the Pentagon?

If they do, they are out of touch with reality and need to be voted out in 2020.

If they do not care what their constituents want, they need to be voted out in 2020 for not serving the people that put them in office.

The people in Congressional Districts Four and Five need to consider this vote, along with the others that have gone against the wishes of the people, and ask the question:

“Does our representative serve our interests and the nations or his own?”

Voters need to consider that basic question among others when making a decision in 2020.

Do they really want to re-elect individuals who are so far on the fringe that they would actually say F You to the 9/11 First Responders?