House Democrats have accomplished in less than two years what Donald Trump could not do in three and a half.

Remember when Mr. Trump promised he would fight for a major infrastructure program when he became President.

With attempts to negotiate a bipartisan agreement with Democrats fell apart because of both Trump pouting because of House investigations and backing off the dollar figure of the plan, political observers consigned this promise in the dustbin with the many other broken pledges the 2016 Popular Vote Loser has made like Mexico paying for the wall or the American People will get better and cheaper health care if they elect him.

The $1.5 trillion bill, called the Invest in America– Moving Forward Act (HR-2) that passed the House of Representatives includes:

The vote for passage was 233 to 188 with three Republicans voting for and two Democrats deciding against. 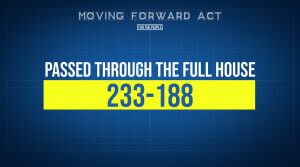 After the vote, Representative O’Halleran released a statement which read in part:

“Much-needed updates to our infrastructure have been on Congress’s back burner for decades, putting the health, safety, and growth of rural communities at risk. Today, we took action for our national infrastructure by passing this important legislation that prioritizes rural and tribal communities by expanding broadband development programs, improving water and wastewater infrastructure, promoting clean energy technologies, and funding critical fixes for our crumbling bridges and roads.”

“The Moving Forward Act prioritizes smart, sustainable infrastructure that’s built to last. This bill is a long-term investment in Arizona—from highways and transit to water systems and airports. It lifts our tribal communities, which for far too long haven’t received the federal funds they deserve. And it helps us meet our responsibility to combat the urgent threat of climate change, all while creating thousands of good-paying jobs.”

Congressional Candidates looking to defeat Paul Gosar and Andy Biggs in November also responded to requests for comment to Blog for Arizona on the importance of the infrastructure legislation.

“The infrastructure bill, HR2, “Invest in America Act” is a great bill to kickstart our economy. It is starting a new vision on how we need to address how we want to see our nation’s infrastructure built by addressing Climate Change at the same time. As we try to rise from this pandemic, we will need to have an infrastructure bill like President Franklin D. Roosevelt did in the 1930s to bring people back to work. We need to move away from fossil fuel dependency and move to renewable energy. We need to decrease our carbon emissions, all while creating and moving toward renewable energy.”

“I guess I don’t understand why Rep. Paul Gosar voted against this bill. Maybe because his donors are mainly energy companies? It prioritizes schools, hospitals, housing, broadband, drinking water, stormwater, the energy grid, and vehicle safety. It also establishes a rebuild rural grant program to improve the safety, state of good repair, and connectivity of transportation infrastructure in rural communities.  I support this bill because Congressional District Four is mainly rural and every provision would help my voters, my rural district, and our state.”

“The GOP, once again, voted against future generations to have a safe environment, provide good-paying jobs, and support innovation.  The infrastructure bill may not be perfect but to ignore the reality of what is happening to our environment, and not look at alternative solutions is irresponsible.”

“The infrastructure bill is a highlight to how broken our Congress is. The Democrats put out a package without working with republicans which then could have put pressure on the Senate. This is a meaningless bill in this term.  The Congress is broken, and Mitch McConnell is the court jester.”

“We should be prepared with an agenda to present to the American people, so we sweep the Senate and are ready with the key parts of the green new deal to put forward in the first ten days of a Biden administration.”

“I would work with Republicans to assure bipartisan support including the water crisis in Arizona.”

“Our infrastructure needs an overhaul and we can create millions of long-term jobs in moving our country forward.”

Of Course, Obstructionist in Chief-Enemy of the People-Political Prince of Darkness-Head of the Legislative graveyard Moscow Rich Mitch McConnell has already said that the House bill is not going anywhere in the Senate.

What is the Republican’s main problem with the bill?

The legislation contains appropriations for rebuilding projects that will both combat climate change and modernize the nations aging infrastructure.

Republicans in Congress have continually obstructed designs to modernize the country’s infrastructure since the Obama Presidency.

What they have against modernizing the nation’s roads, shipping lanes, airways, railways, electric grid, and broadband in an environmentally conscientious manner makes no sense.

With their refusal to support the Invest in America-Moving Forward Act, they have proven again they are not a governing party.

The voters need to elect public servants that will build and modernize the safe and advanced infrastructure for this century.