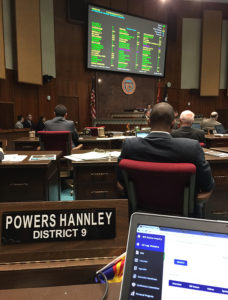 Taking our first votes of the 53rd Legislature

This week in the Arizona Legislature is crossover week, which means bills passed by one house will be heard by the other. The House began hearing Senate bills on Monday and vice versa. In advance of crossover week come two weeks of cramming as many bills into the pipeline as possible.

Last week the House passed the 200-bills-passed threshold and had two late nights– 7 p.m. on Tuesday and 11:30 p.m. on Thursday (the deadline to hear House bills). If you want to hear some late-night speechifying, check out the debate on the Citizens Initiative— which the Republicans and the Chamber of Commerce want to kill and the Democrats defended. (When you go to the video, the agenda of the debate appears below, so you can scroll in to the sections you want to view.)

There have definitely been some themes so far in this session. Besides the push for fingerprinting citizens, the jabs at environmental protection, and the elimination of oversight and transparency by cutting all citizen review boards, the big theme has been giving away tax revenue (AKA, tax cuts, tax credits, tax subtraction, tuition waivers, economic development or trickle down economics).

Ironically, on many of these giveaway bills fiscally conservative Republicans (who don’t like spending money) and the fiscally conservative Progressives (who don’t want to give away tax revenue as long as the schools are underfunded) voted together. In the past two weeks, there have been maybe as many as 10 bills where some combination of Progressives and Conservatives voted against spending money that we don’t have.

Although most of these tax cuts (tax subtractions or tax credits) have passed the House, they can still be stopped when they are heard in the Senate and vice versa. (Bad bills that passed in the Senate, like vouchers for all, can be stopped in the House in the coming weeks.)

Greenhouse giveaway, HB2325, was brought forward by a grower in Santa Cruz County who lost a battle in tax court and came to the Arizona Legislature for a fix. This foreign-owned corporation wants their 100,000 square-foot “movable” greenhouses to be classified as personal property (which depreciates over time and would eliminate all of this corporation’s tax burden in the future). Currently, the structures are classified as real property, which appreciates over time as the business grows. This tax giveaway was defeated by a bipartisan urban/rural coalition of fiscal conservatives, including all of the Progressives. I voted against it because although this bill was designed to help one grower, if passed, it could help multiple greenhouse growers– to the extreme detriment to schools, particularly rural schools. Schools need the money; corporations should pay their fair share. (Although this bill was defeated, and hopefully is dead. Watch out for a Zombie revival bill. Here is the video.)

Corporate Welfare for the Big Boys (HB2492) is a complicated, multi-layered bill with several financial benefits including tax credit conversion and sales tax forgiveness for Arizona’s largest and most successful businesses— Raytheon, Honeywell, Boeing, and Intel. This bill was designed to help employers with 2000 or more employees with research and development and construction. As I said on the House floor when I spoke against this bill, it does nothing for local small businesses or entrepreneurs (like the researchers at the UA Tech Park)– unless at some point in the future Trickledown Economics actually works. (We have many scientists in Southern Arizona. Why would we help only military research? We should foster research in many areas — from the development of new drugs to the development of high-heat/low-water crops– by giving out seed grants to scientists. Seed grants help scientists conduct preliminary research and get larger federal grants. That’s sustainable economic development.) Also– at a time when the City of Tucson is facing multiple sales tax increases, why would we forgive sales tax paid by major employers, while requiring citizens to pay more? In a surprising 32-23 defeat, a bipartisan group of fiscally conservative Republicans (who don’t like to spend money) and Democrats (who want schools funded first) stopped this bill on Thursday. (Again, watch for a Zombie revival. Here is the video.)

UPDATE: The HB2492 House floor debate and vote was covered by several media outlets. (My comment about sales tax and diapers was even picked up by the Miami Herald.)

Arizona Republic Version: How a tax-cut bill met its demise at the Arizona Legislature (which has a cute video attached)

Airline giveaway, HB2533, like the greenhouse giveaway, was brought forward to help one corporation. The airline company who would benefit from this bill is not headquartered in Arizona currently. Apparently, Arizona already gives some sort of tax credit to airlines; with this bill the sales tax break is extended to airlines whose planes are jointly owned. Silly me, when I first read this bill, I thought of my friend who owns a small plane; due to community property, he and his wife jointly own his plane. I didn’t realize initially that this bill was designed for one corporation that has 700+ planes. This could cost the state hundreds of thousands of dollars in future revenue. The fiscal note– which is supposed to estimate the cost or benefit of a bill– was really confusing. I asked the sponsor to explain the fiscal impact to the general fund of excusing these taxes. The answer is: no one knows. This bill was on its way to defeat until the Republicans did some arm-twisting and passed it by a narrow margin, 32-28. (Here is the video.)

GPLET reform (HB2213) was a hot potato– with Republicans, Democrats, and lobbyists for the cities and developers tossing it around for weeks before we voted last week. The GPLET is a tax abatement mechanism that has been around for years. This year’s bill represents the second time the Legislature has tried to reform the GPLET and make the tax giveaways less lucrative for the recipients and less stressful on the general fund. The GPLET is a tax swap plan that allows developers to forego paying property taxes while they are building upon and developing a plot of land in an area designated as GPLET-eligible. (In Tucson, these tax giveaway deals have occurred primarily downtown. Tempe and Phoenix also have extensively used the GPLET to develop Mill Ave and downtown Phoenix.) The original GPLET allowed property tax abatement forever into the future. The current GPLET gives away future property taxes for 25 years into the future. The reformed GPLET (HB2213) caps the property tax giveaways at eight years. What’s wrong with giving away so much property tax? Public schools are funded through property taxes. In their current form, GPLETs allow corporations to not fund schools or anything else paid for by property taxes. In its original form, HB2213 would have stopped local governments from excusing property taxes meant for schools, but that was eliminated from the final bill, along with the definition of “blight”. (GPLETs are supposed to help a city eliminate blight.) So– why is local government letting corporations off the hook for funding schools? Lobbyists tell me that the GPLET is good for Tucson Unified School District (TUSD), which is the only school district impacted by Tucson’s GPLET deals. I asked to see the spreadsheet. Another politico recently told me that if the district’s property taxes don’t cover the money designated to the district, the state General Fund backfills the funds. If we give away more property taxes at the local level, we become more dependent upon the Legislature for school funding. (Here is the video.)

This is just a short list of spending bills that we have voted on– in advance of the budget. Basically– no one knows the cumulative fiscal impact of these bills (and the other tax cuts and tax credits) in the future. We need to fund the schools– before anything else.