Ratification of the Equal Rights Amendment (ERA) in Arizona was in the news and in the streets this week. ERA supporters launched an ambitious 38 Mile March for the ERA through the streets of Phoenix– starting at the Capitol on Monday, March 11 and ending there on Wednesday.

After the speeches, supporters filled the gallery of the Arizona Senate, and a contingent of 30 or so supporters went to the Arizona House. In the Senate, there was a motion to suspend the rules and vote on the ERA. In the House, Democrats attempted to introduce the ERA supporters in the gallery and were shut down when the Republicans decided to police the content on our speech– in addition to strictly limiting our time to one minute.

The news stories covered the Senate action because that was the official vote. They didn’t cover the censorship fiasco in the Arizona House. 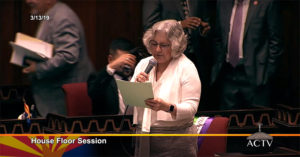 Patriarchy and suppression of speech were on full display. You can watch the whole scene here on the official video. Points of Personal Privilege start at around 2 minutes. Note the lengthy introductions that are allowed for people who are representing other groups– not the ERA.

Rep. Athena Salman starts the ERA introductions at about 10:28 minute mark. She and I both got through our introductions without interruption. Things heat up when Minority Leader Charlene Fernandez (at the 13:16 minute mark) tries to introduce an ERA marcher from Rep. Warren Petersen’s district and is gaveled down and scolded by Speaker Pro Tempore T.J. Shope. At 15:43, Shope shuts down Rep. Raquel Teran and tells the gallery to be quiet. At 17:08, Rep. Randy Friese is not shut down. 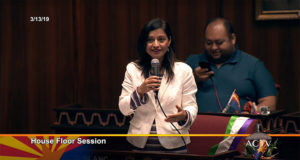 Rep. Isela Blanc is incredulous as she is gaveled down by Republican leadership.

At 18:14 Rep. Mitzi Epstein is shut down and protests Shope’s censorship of her speech.  At 20:25, Rep. Isela Blanc is allowed to introduce her student shadow, but when she starts the ERA introduction, she doesn’t get more than a few words into her introduction before Shope stops her. At 21:17, Salman reads the rule book and calls out the Republicans for censoring our speech. The gallery and the Democrats burst into applause and get the gavel. The rules limit the amount of time we can speak to one minute but not the content. 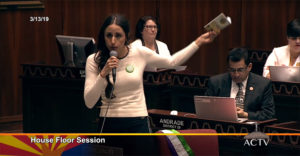 Rep. Athena Salman reads the rule book and calls out censorship by Republicans.

The scene devolves after Shope rules Salman out of order. Friese protests the ruling of the chair and calls for a roll call vote (23:05). This results in multiple speeches about the ERA and freedom of speech– and multiple women being called out of order for speaking truth to power. I watched the whole fiasco on video, and it is shocking how many women were disrespected– House members and women in the gallery.

I guess I started all of this. I wanted to ensure that the ERA marchers were recognized, like every other group that comes to the capitol and sits in the gallery. I distributed papers to the Dems with women’s names, their legislative districts and a sentence or two on why they did the ERA March. What transpired reminded me of the Jack Nicholson and Tom Cruise movie “A Few Good Men”. Jack Nicholson is on trial. Lawyer Tom Cruise asks him to tell the truth. Jack Nicholson says angrily, “The truth? You can’t handle the truth!”

You can watch the full official video here. The House Democrats made some inspiring speeches about equal rights– when they weren’t gaveled down by Shope or called out of order by. Republican legislators. It was a disgusting display and the second attempt to limit speech about women’s rights in less than a week.

To the Marchers… Don’t Give Up!

I am so proud of the marchers and the stalwart supporters of the ERA. The 38 Mile March for the ERA and for women’s equality garnered national media attention. It is obvious from what transpired on the floor of the House that even women who are elected to public office DON’T have equality or freedom of speech in the state of Arizona.

What I find ironic about the news stories about the ERA in Arizona is that the media quote me and multiple other supporters who are in favor of equal pay for women. In the news stories, on the con side, there is only one voice— Cathi Herrod, a lobbyist who has built her empire and her business on suppressing the rights of women and controlling the Republican Party in Arizona. Why aren’t Republican legislators speaking for themselves? Their constituents wanted to hear their opinions, not the opinion of a lobbyist, spouting talking points from the 1970s. Republicans, show your cards. The voters deserve to hear YOUR opinion on equal pay and equal rights for women.