The 38 Mile March for the ERA in Arizona

The 38 Mile March for the ERA in Arizona

Literally carrying the same banner as women’s rights advocates decades before, Arizonans began a three-day march Monday to campaign for passage of the Equal Rights Amendment.

They plan to walk 38 miles in an attempt to convince state lawmakers to ratify the ERA, which would broadly guarantee equal rights between men and women.

And that number is no coincidence: Arizona could be the crucial 38th state that puts the ERA in the U.S. Constitution. Proponents say they are just one state away from ratification.

It’s an uphill battle given patriarchal Republicans in the state Legislature have refused to allow a vote on the measure for at least three years.

But that opposition could be cracking. Support from a handful of GOP legislators could make the vote a toss-up, and ERA supporters across the country are closely watching because Arizona could be the linchpin state.

That’s why women and men who gathered outside the Capitol on Monday — many wearing purple, white and green ERA sashes — said the odds are turning in their favor. “It’s time for the Republicans to have a vote,” Rep. Pam Powers Hannley, D-Tucson, told the cheering crowd. “Their constituents want to know where they stand on equal pay for women. Why are they afraid to vote?” [Watch Powers Hannley’s full speech at the end of this post.]

After fiery kickoff remarks, they marched downtown carrying a giant green banner, the same banner ERA supporters waved in 1978 during a historic march on Washington, D.C.

They planned to walk 13.8 miles Monday to Sandra Day O’Connor ‘s former house in Tempe. O’Connor, the retired justice, was the first woman to serve on the U.S. Supreme Court.

The march is a symbolic tribute to suffragettes, who walked hundreds of miles in the early 1900s to give women the right to vote.

ERA opponents argue the debate is pointless because Congress’ self-imposed deadline has passed. However, supporters argue that isn’t a barrier because the Constitution sets no deadline for ratification.

If Arizona becomes the 38th state, that issue likely will be fought in court or in the halls of Congress.

“Doctor Evil,” Arizona’s 31st (unelected) senator, lobbyist Cathi Herrod from the Center for Arizona Policy was on hand to deliver a rebuttal. The measure isn’t needed because other areas of federal law already prohibit discrimination on the basis of gender. “Those issues have all been taken care of,” said Cathi Herrod. She is disingenuous, and wrong.

A one trick pony, Herrod said the ERA is “really about abortion” and that “women enjoy every right in the Constitution that men do.”

This is the same old tired bullshit that Phyllis Schlafly was spewing back in the 1970s. Herrod is plagiarizing Schlafly. She has nothing new or original to say.

Supporters contend the abortion argument is a red herring because the Supreme Court has established that the procedure is legal. Roe v. Wade (1973).

In 2011, the late Justice Antonin Scalia shot down ERA opponents’ facetious claim that the 14th Amendment’s equal protection clause has been extended by the courts to cover women. Scalia: Women Don’t Have Constitutional Protection Against Discrimination:

The equal protection clause of the 14th Amendment to the U.S. Constitution does not protect against discrimination on the basis of gender or sexual orientation, according to Supreme Court Justice Antonin Scalia.

In a newly published interview in the legal magazine California Lawyer, Scalia said that while the Constitution does not disallow the passage of legislation outlawing such discrimination, it doesn’t itself outlaw that behavior:

In 1868, when the 39th Congress was debating and ultimately proposing the 14th Amendment, I don’t think anybody would have thought that equal protection applied to sex discrimination, or certainly not to sexual orientation. So does that mean that we’ve gone off in error by applying the 14th Amendment to both?

Yes, yes. Sorry, to tell you that. … But, you know, if indeed the current society has come to different views, that’s fine. You do not need the Constitution to reflect the wishes of the current society. Certainly the Constitution does not require discrimination on the basis of sex. The only issue is whether it prohibits it. It doesn’t. Nobody ever thought that that’s what it meant. 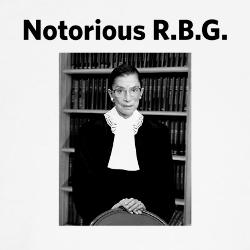 The Supreme Court has applied the 14th amendment to laws that discriminate against women — largely in cases argued before the court by Ruth Bader Ginsburg, See Sexual Equality Under the Fourteenth and Equal Rights Amendments — although support for this interpretation is not universal. Other judges have not reinforced the application of the 14th Amendment to women’s rights.

“If I could choose an amendment to add to the Constitution, it would be the Equal Rights Amendment,” Ginsburg said to an audience at the National Press Club.“

I think we have achieved that through legislation, but legislation can be repealed, it can be altered,” Ginsburg continued. “So I would like my granddaughters, when they pick up the Constitution, to see that notion – that women and men are persons of equal stature – I’d like them to see that is a basic principle of our society.”

One key concern for ERA backers is equal pay — nationally, women earn about 80 cents on average for every dollar a man makes. They also worry protections against discrimination can be undone by President Donald Trump’s administration. (See RBG above).

The ERA was revived in 2017, when Nevada became the 36th state to ratify the amendment. Illinois followed and became the 37th state last year.

Arizona has increasingly become a focus of the fight given the effort has fallen short in other states, such as Virginia, where ERA supporters had hoped to pick up the crucial 38th state.

Multiple bills to ratify the ERA were introduced in the Arizona Legislature this year. But because of opposition from GOP leaders, none got a committee hearing before a Feb. 22 deadline for bills to be heard in committee in the chamber of origin.

Secretary of State Katie Hobbs, a Democrat and former state senator, spoke at Monday’s rally, urging lawmakers to suspend their rules to allow a floor vote in the state Senate.

“This is unacceptable in a state that has been the place of so many firsts for women,” she said.

Tania Gerard was among the women who marched Monday. She walked alongside her 6- and 8-year-old daughters, who are on spring break from school; they planned to walk until the girls got tired.

“If the ERA is ratified, we will be be making history,” Gerard said. “I think they will remember it … ‘This is when we walked with mom for the Equal Rights Amendment.'”

ERA supporters will resume their march Tuesday, with stops by the trailhead of Piestewa Peak and U.S. Sen. Kyrsten Sinema’s office on Camelback Road.

They plan to return to the Capitol Wednesday.

That never happened, but you can read her letter here.

Back then O’Connor said the ERA “stands in the tradition of other great amendments to the Constitution.”

She was right. She still is.

The effort to pass the ERA didn’t end in 1982, the deadline set for state ratification, by which time only 35 of the necessary 38 states had ratified it.

It’s an open question as to whether such a deadline would stand a court challenge. And there also is a question about what happens to those states that initially approved the ERA but later rescinded it.

Still, the Virginia Senate approved the ERA just this week. [The bill died in the Virginia House of Delegates.]

In recent years it’s been approved by states like Illinois and Nevada.

A proposal to debate the ERA has been blocked by Republicans in the Arizona Legislature for years.

Once a Republican proposal

It will come up again this year.

It’s an odd thing since, nationally, the ERA was part of the national Republican Party platform for decades before 1980.

The argument against the ERA these days comes from those who say it’s not necessary. That’s partly true. Women’s rights are better protected now than they ever were.

But they’re not yet equal.

The late Supreme Court Justice Antonin Scalia put it this way: “Certainly the Constitution does not require discrimination on the basis of sex. The only issue is whether it prohibits it. It doesn’t.”

A bipartisan issue if there ever was one

Gov. Doug Ducey spoke a lot during his State of the State speech about working across party lines, about finding common ground.

The language of the ERA is simple and direct:

“Equality of rights under the law shall not be denied or abridged by the United States or by any State on account of sex.”

Is there anyone, Republican or Democrat, who disagrees with that?

Yes, the religious extremists at the Center for Arizona Policy, led by ‘Doctor Evil.” It is time to break lobbyist Cathi Herrod’s undue influence over the Arizona legislature.