Home/COVID-19 & Healthcare, National Elections, National Politics/Biden and Harris hit a Home Run in their first Joint Appearance Together
Previous Next 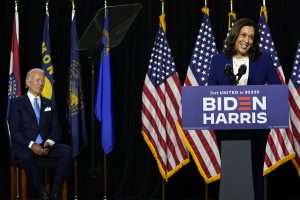 Proclaiming that this “a battle for the soul of the nation,” former Vice President Biden said that Senator Harris “knows what is at stake and what do we stand for and what do we want to be.”

Senator Harris said that the upcoming campaign will be about “the people” and “who we are as a country.”

Biden outlines the goals of the campaign and introduces Harris.

Saying “this is an exciting day,” the 2020 Democratic Presidential Nominee started off by thanking all the candidates for the Vice Presidency that he and his team had vetted, saying they were “all qualified to be president.”

He then told the reporters that had gathered and the audience watching that “I have no doubt that I picked the right person.”

Describing Senator Harris as “smart, tough, experienced, a proven fighter for the backbone of our county… will help govern… is ready to do the job on day one,” Biden said that “little girls, especially black and brown, just maybe they are seeing themselves in a new way as the stuff of Presidents and Vice Presidents.”

Biden later said that, like the arrangement he had with President Obama, Harris “would be the last person in the room” to offer counsel.

Telling the American People that Senator Harris and he would fight to make sure everyone has the opportunity for “a fair shot,” Biden said that a Biden/Harris Administration would start on the first day to “fix the mess Trump and Pence have created…and Build Back Better.”

The former Vice President then condemned the Trump/Pence Administration for their failures in:

The 2020 Democratic Nominee said this campaign was about “possibilities for the American People” and the “soul of the country.”

He cited Trump’s comments about “fine people being on both sides” in Charlottesville three years ago as the moment he decided he wanted to run for President.

After welcoming Harris and her family into the Biden clan, the former Vice President introduced the California Senator as “the next Vice President of the United States.”

After saying “thank you, Joe, I am incredibly honored and am ready to get to work, and  I am so proud to stand with you,” Senator Harris thanked all the women trailblazers that had “made her presence (today) possible.”

The 2020 Democratic Vice Presidential Nominee then picked up on the themes outlined moments before by Biden, stating “everything we care about is all on the line” and America is in a “crisis of leadership.”

Contending that “Trump only cares about himself,” and is “not up to the job,” Harris laid out all the ways he and Pence have hurt the country, saying “the case against Donald Trump and Mike Pence is open and shut.” These included Presidential mismanagement with regards to:

Telling the audience “in 83 days, we have a chance to choose a better future for our country,” Harris, citing her friendship with Biden’s late son Beau, said that the former Vice President’s first response to people, unlike Trump “is to care for everyone else” and “what can I do to make life better for you.”

Saying that a Biden/Harris Administration will fight for the people every day, Harris said “this election is about building back better.” She said her and Biden will work to:

Calling the people “the heroes of our time,” Senator Harris asked “for people to work harder and turn out and vote like never before.”

She finished by stating “electing Joe Biden is just the start of the work ahead of us.”

Please watch the whole event by clicking on the video link below.