Raw Story gets to the heart of the scandal:

It seems the president has uncovered where the intelligence faltered in the reporting of a Russian bounty on American soldiers.

Trump tweeted late Sunday that “Intel” never told him about the story because they didn’t find it “credible” enough to tell him. 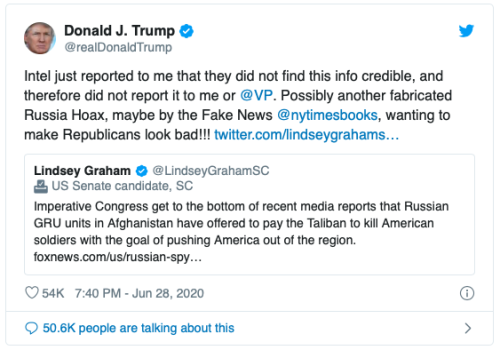 [However] intelligence officials believed it was credible enough to have “high-level meetings” at the White House in March about it. [I]t seems that the “high-level” didn’t include the president and vice president.

The Washington Post reports, Russian bounties to Taliban-linked militants resulted in deaths of U.S. troops, according to intelligence assessments:

Russian bounties offered to Taliban-linked militants to kill coalition forces in Afghanistan are believed to have resulted in the deaths of several U.S. service members, according to intelligence gleaned from U.S. military interrogations of captured militants in recent months.

Several people familiar with the matter said it was unclear exactly how many Americans or coalition troops from other countries may have been killed or targeted under the program. U.S. forces in Afghanistan suffered a total of 10 deaths from hostile gunfire or improvised bombs in 2018, and 16 in 2019. Two have been killed this year. In each of those years, several service members were also killed by what are known as “green on blue” hostile incidents by members of Afghan security forces, which are sometimes believed to have been infiltrated by the Taliban.

The intelligence was passed up from the U.S. Special Operations forces based in Afghanistan and led to a restricted high-level White House meeting in late March, the people said.

The meeting led to broader discussions about possible responses to the Russian action, ranging from diplomatic expressions of disapproval and warnings, to sanctions, according to two of the people. These people and others who discussed the matter spoke on the condition of anonymity because of its sensitivity.

The disturbing intelligence — which the CIA was tasked with reviewing, and later confirmed — generated disagreement about the appropriate path forward, a senior U.S. official said. The administration’s special envoy for Afghanistan, Zalmay Khalilzad, preferred confronting the Russians directly about the matter, while some National Security Council officials in charge of Russia were more dismissive of taking immediate action, the official said.

It remained unclear where those discussions have led to date.

CNN confirms The Post reporting in its own report:

CNN previously reported that Russian intelligence officers for the military intelligence agency GRU recently offered money to Taliban militants in Afghanistan as rewards if they killed US or UK troops there, according to a European intelligence official. The official told CNN the incentives offered by the Russians had, in their assessment, led to Coalition casualties, which would be service members’ deaths or injuries. The official did not specify as to the date of the casualties, their number or nationality, or whether these were fatalities or injuries.

There was discussion as far back as February and March in the US intelligence community and among the top military commanders about the Russian operation to assess the intelligence and what exactly was happening, a US official told CNN on Sunday. There were some efforts at protecting US forces because of the intelligence, the source also said.

Trump, however, has repeatedly denied receiving a briefing about intelligence that Russians had tried to bribe Taliban fighters to kill US troops.

Trump, who is supposed to get a daily intelligence briefing called “The President’s Daily Brief,” rarely takes the briefing, instead only doing it a few days a week. There have also been reports that the president has a difficult time paying attention and that some briefers must find ways of keeping his attention. It’s unknown if the president was briefed and simply doesn’t remember it or wasn’t paying close enough attention.

The Washington Post’s national security columnist David Ignatius was a guest on MSNBC’s Morning Joe this morning and discussed his own reporting into this scandal. Pentagon officials were ‘pounding down the door’ to get Trump to do something about Russia’s assassination bounty: WaPo’s Ignatius:

Appearing on MSNBC’s “Morning Joe,” longtime political columnist David Ignatius said that his own follow-up on the New York Times’ explosive report that Donald Trump’s administration was well aware that the Russians were offering a bounty for the death of U.S. military members revealed that Pentagon officials have “pounding on the door” and trying to get Donald Trump to do something about it.

Speaking with host Joe Scarborough, Ignatius said he was stunned by the report from the Times and started looking into the details himself for confirmation.

“Based on my reporting trying to confirm the New York Times’ excellent story it’s clear in late March you had senior U.S commanders, senior civilian intelligence officials, in effect pounding on the door of the White House saying we need to do something about this, we need to come to a conclusion about what damage the Russian program is doing, we need to reassess our programs in Afghanistan and they couldn’t get an answer,” he reported. “To this day there’s not an answer, there’s not a real response. Was this because the president was briefed and did nothing or because he wasn’t briefed because people were afraid to give him bad news and kept it to themselves? I don’t know.”

“But it almost doesn’t matter in terms of the breakdown in terms of the way the government is supposed to work,” he continued. “In some ways, it’s almost worse the department didn’t tell him, ‘Mr. President while you’re encouraging Russia to rejoin the G8, we should mention Russia is putting bounties on the heads of American soldiers.’ If they didn’t tell him that, it’s a stunner.”

“I think people are steamed up about it, there’s nothing that would make American commanders angry other than the idea that their soldiers had targets on their back because of the actions of somebody that the president was still speaking of as a prospective ally,” he added.

Trump’s flat denial that he was ever briefed on this intelligence is falling apart under closer scrutiny. It is simply not credible that the Intelligence Community and the Pentagon would not have briefed the commander-in-chief on this intelligence. They were “pounding on the door” trying to get him to take action, and he never did.

Instead, Trump is now taking the Russian propaganda position that this is “fake news” and a “hoax.” Such a loyal lapdog to Vladimir Putin.

Donald Trump can take all his empty words about respecting our service and shove them. #TRE45ON #TraitorTrump pic.twitter.com/7vxGxLBYh0