For the past few years, Senator Paul Boyer has been trying to pass legislation that would lengthen the time that people can come forward to make complaints about past child sexual abuse.

Currently, Arizona’s laws favor the sexual predators, not the victims, according to Boyer. 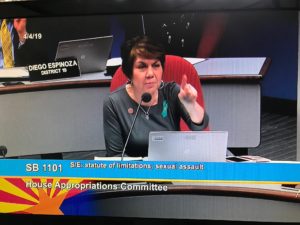 The 11-member House Appropriations Committee has only four Democrats. Minority Leader Charlene Fernandez and other Dems pushed hard for a vote on SB1101.

Boyer introduced SB1255 to lengthen the time to complain about past child abuse and give victims, whose statute of limitations had run out, a window to complain about past abuse. Boyer’s bill was killed in the Senate Judiciary Committee by Chair Eddie Farnsworth (pictured above). In April, a similar (SB1101) bill was introduced as a striker by House Appropriations Chair Regina Cobb. After two hours of discussion and heartfelt testimony by victims, family and experts, Republicans voted unanimously not to take a vote on SB1101. This bill would have given child abuse victims until age 30 to report past abuse and would have provided a one-year window to bring up past complaints that had run out of time under the current law. (Arizona currently has the most stringent child sexual abuse reporting laws in the country. Victims have only two years after turning age 18 to complain.)

In the past week, both Boyer and Senator Heather Carter have said that they won’t support the Republican budget — unless Boyer’s child sexual abuse bill is put up for a vote.

Enter… HB2746, which was submitted as a late bill by Rep. T.J. Shope on Thursday, May 16, and heard in Rules. HB2746, which is backed by Speaker Rusty Bowers, gives child sexual assault victims until age 30 but doesn’t give them a window to bring up past abuse.

Boyer wasted no time in releasing the following statement to the press. (Stay tuned for more on HB2746 next week. Boyer and survivors of child sexual abuse will hold a press conference at 11 a.m. at the Capitol.)

PRESS RELEASE
Senator Paul Boyer released the following statement regarding the introduction
of HB 2746
HB 2746 is a cynical bill not worthy of this legislative body because it leaves the vast majority of survivors of childhood sexual abuse behind and protects the institutions and organizations that try to cover up those crimes.
Victims of childhood sexual abuse want two things.  First, they want to ensure that no additional children will be harmed, now or in the future.  Second, they want a safe environment to come forward to confront their abuser.
That’s what my effort to pass legislation has been about.
This cause is not about money, it is not about me winning on my bill and I am disgusted that anyone would suggest otherwise.  Accusing survivors of solely seeking compensation is an attempt to re-offend a group of individuals who have already been deeply harmed.
Those of us who have been a part of the child safety movement for years have witnessed survivors come close to regaining their agency for the first time only to have legislative bodies take away their voices.  That should never happen in Arizona and I don’t intend to let it.
We get elected to help people and keep them safe.  HB 2746 yet again leaves the vast majority of survivors behind and protects the predators and the institutions that harbor them.
####
Senator Paul Boyer
Education Vice-Chair
Higher Education
Finance