UPDATED: Call the Republicans what they are on fiscal responsibility: Phonies

Home/COVID-19 & Healthcare, Education/UPDATED: Call the Republicans what they are on fiscal responsibility: Phonies
Previous Next

UPDATED: Call the Republicans what they are on fiscal responsibility: Phonies 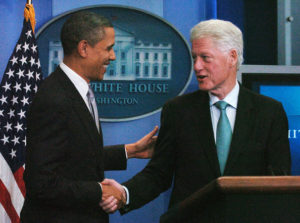 Former Presidents Bill Clinton and Barrack Obama, the only two Presidents in the last 40 years to preside over falling budget deficits while growing the American Economy. Clinton left this country with a budget surplus.

The annual budget deficit for 2020 and beyond will, in all likelihood, surpass one trillion dollars.

This is while the country is not in a recession.

The reason for this increase in the deficit. It is largely due to the Trump Tax Cuts for the one percent that did not pay for themselves. Wasteful spending on defense, the trade wars that have not been easy to win, and no long term fiscal and investment strategy to move the country forward in a sustainable path are other causes for this ballooning deficit.

People familiar with the history and the recent political trajectory of the two major political parties over the last 40 years should not be surprised with Republican mismanagement, fueled by what Paul Krugman calls “Zombie” economic ideas, that has brought an over 22 fold increase in the national debt since 1981.

What should gall people more is the profound hypocrisy from Republicans when deficits occur on their watch.

When Ronald Reagan raised the national debt from one trillion which took 200 years to accrue to over four in eight years, where was the Republican outrage on deficits?

When first-term popular vote loser George W. Bush took an inherited surplus and blew it on two unpaid tax cuts, an unpaid war in Iraq and a partially unpaid Medicare Prescription Drug Benefit, where was the Republican outrage on deficits?

When the current popular vote loser President and his allies passed the major tax cut without paying for it, that has led to trillion-dollar deficits for 2020, where has been the Republican outrage on deficits?

You can probably hear the crickets in the rooms where most of the right-wing pundits are working in silence.

Over the last 30 years, there have been two general reactions by Republicans when Presidents try to prudently manage the economy.

The first reaction on deficits is when they ridicule Presidents like George H.W. Bush, Bill Clinton, and Barrack Obama when they pass tax increases on the rich to bring deficits down, saying it is the wrong strategy to combat the national debt because it will bring down the economy. Here is a quick history lesson. Economic expansion occurred after Bush, Clinton, and Obama tax increases (the Reagan ones too but Republicans seem to have a memory lapse when it comes to that inconvenient truth.)

Republicans also find deficits matter when Presidents like Bill Clinton and Barrack Obama (the only two Presidents in the last generation to actually preside over falling deficits)  fund and pay for social justice government programs like Obamacare or the Clinton Economic Plan that put this nation on a sound financial footing. They claim that raising revenues is not the problem but government spending is. They have put forth this myth for decades now. People need to realize they were wrong then and they are wrong now.

People also need to realize that Republicans are phonies on fiscal responsibility.

They are perfectly in sync with one another if tax cuts, deregulation, and increases to defense spending add to the deficit.

Do not believe them when they say we need an increase in defense to protect us. We need a more prudent defense strategy based not on military hardware but preventing and retaliating against cyberwars.

Do not believe them when they want to deregulate things like environmental protection because regulations are too burdensome and counterproductive. Do you really want to put your faith in businesses policing themselves and safeguarding our air and water? We need an Environmental Protection Agency that will protect our children from exposure to toxic and industrial waste.

We need sensible tax strategies that grow the middle class and economy that will actually reduce the debt, not enrich the plutocratic and oligarchical one percent.

We need investments in infrastructure and social justice programs like free college and career apprenticeships, paid family leave, universal full-day PreK and Kindergarten, universal healthcare for all, combatting climate change by shifting to green energy and infrastructure projects like universal broadband, modernizing our electric grid and railways as well as transportation improvements and repair that will also reduce the debt in the long term.

When Republicans come and say we can not do these things because it will add to the debt, call them what they are: phonies and do what is right for the people.

Their economic plans be it Reaganomics or Junior Bush’s ownership society or the  Make America Great Again at the national level or the Koch sponsored programs in places like Kansas and Arizona have proven to be disasters while Democratic programs designed to prudently manage the budget, expand the Middle Class and increase demand for economic products, and improve the human condition have been proved to work in the last two Democratic Presidencies and in states like Minnesota, California, and New York. Facts are stubborn things and people need to start to pay attention to them.