Axios recently reported that “17 countries use more than 80% of their available water supplies every year, meaning droughts or increased water demand for agriculture and growing cities could leave them at risk of crisis, according to the World Resources Institute.” 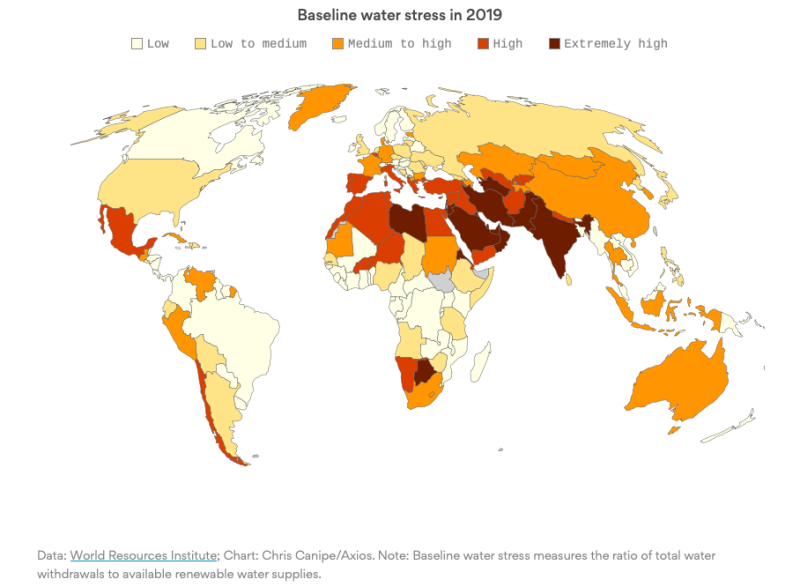 Last year, the nearly 4 million people who live in Cape Town, South Africa were in a panic. Their city was three months away from becoming the first major metropolis to fully deplete its water sources. This year, Chennai – India’s sixth largest city – 4.6 million people have all but run out of water. A Major Indian City Has Nearly Run Out of Water, And No One Is Talking About It.

Where things stand: A dangerous combination of hot and dry weather, poor water management and rising demand is leaving cities including Chennai, India, and Harare, Zimbabwe, without water for days on end, Tanvi Nagpal of Johns Hopkins writes for Axios Expert Voices:

What to watch: The pressures on municipal water supplies are likely to worsen with the effects of climate change.

Another thing to watch: climate refugees. Humans cannot live without water, and they will migrate, as they have done throughout human history, to move to where there is a reliable source of water when their land becomes arid.

The United States is not without its regions strained for water, despite the fact that The continental US just had the wettest 12 months in the 124 years on record (May 2019). “The continental US is also free of severe to exceptional drought for the first time in the two decades the US Drought Monitor has been in business, officials reported.”

The Washington Post reports, Here are the places in the U.S. most strained for water:

The United States has enough water to quench its farms and cities — especially compared to other countries wrestling with more drastic impacts of a warming global climate.

But water supplies here look more stressed the closer you look at certain parts of the country. 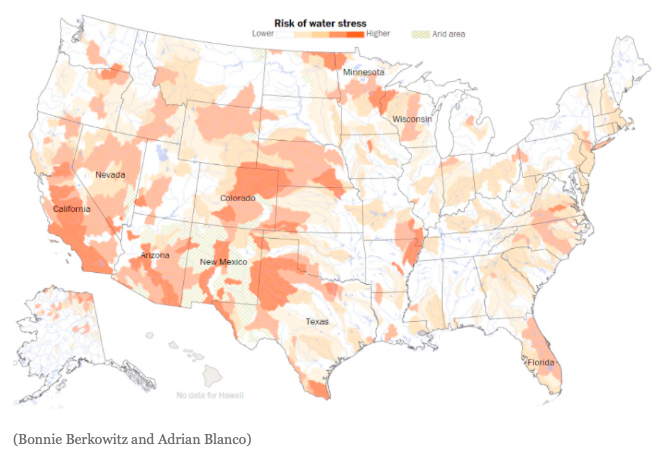 The Post’s Bonnie Berkowitz and Adrian Blanco report on the World Resources Institute’s country-by-country analysis of annual limits on water supplies. The United States overall ranked 71st of 189 countries on a scale of “water stress,” a measure of how close a place comes to running out of water entirely in a typical year. That means “we are pulling out just under 20 percent of our available water,” they note.

But some regions are already facing a greater strain on their agricultural and drinking water supplies — and it could grow as the climate continues to warm.

Southwestern states are the most stressed. New Mexico is the only state in the “extremely high” stress category, earning the same score as the United Arab Emirates, which was the 10th most stressed in the world. Arizona is one of four states in the “high stress” category. In some cases, strain on water this intense can force residents to forgo showering and maintaining lawns in an effort to ration water.

New Mexico, for instance, was the only state in the “extremely high” category, earning the same alarming score (4.26 on a five-point scale) as the United Arab Emirates, which was the 10th most-stressed in the world.

New Mexico’s demand sucks up more than 80 percent of the largely arid state’s annual supply. That leaves 20 percent, but such a narrow margin means that it may have trouble withstanding an extended drought or an increase in demand from population or industry growth.

Neighboring Arizona was among four states in the somewhat-less-perilous “high stress” category.

The analysis found that California, which recently emerged from a years-long drought, uses more water than any other state in the country. There, the tug-of-war between the Central Valley’s farmers and Southern California’s urban centers is a perennial feature of the politics of the nation’s most populous state, which ranks No. 2 in the country in terms of water stress. Even seemingly safe states experience water stress. Colorado, fed by snow melt from the Rockies, uses a tremendous amount of water in its agricultural eastern half. Wisconsin and Minnesota, the latter being the “Land of 10,000 Lakes,” have water stress once you move away from the Great Lakes basin.

Beyond the United States, there are 17 countries across the globe — which make up about one-fourth of the Earth’s population — at risk of using up all their water, Berkowitz and Blanco note. The New York Times reports from the same data that among cities with more than 3 million people, 33 cities (with a total population of more than 255 million), “face extremely high water stress, with repercussions for public health and social unrest.” That is set to reach 45 cities and a total of almost 470 million people by 2030. 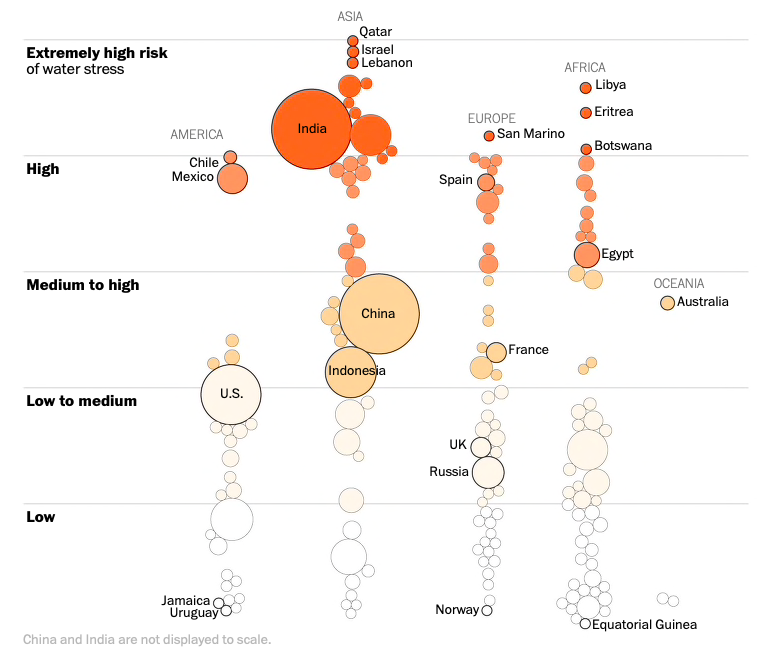 The most dire numbers are in Qatar (4.97 on a water-stress scale of 1 to 5), which pulls out nearly all its available water in any given year, followed by Israel and Lebanon.

But by far the most populous high-stress country is India, where more than 600 million people live in areas of high or extreme water stress, said Shashi Shekhar, the country’s former secretary of India’s Ministry of Water Resources. After two straight unusually weak monsoon seasons, taps in the city of Chennai ran dry in June.

In South Africa, Cape Town only narrowly avoided Chennai’s fate in 2018 after drastically curbing water use. Mexico City, meanwhile, is sinking because so much groundwater is being pulled out, Otto said.

Not all the news is bad

Fourteen countries had a score of 0.0, meaning either supply is very high, demand is very low or both. Those include countries such as Uruguay, Norway, Jamaica and Equatorial Guinea.

More importantly, it is the best way to prevent social unrest and wars over access to water. Newsweek reported back in 2015, The World Will Soon be at War Over Water. In April of this year, The National Interest reported, The Coming Wars over Water? The world went to war over oil in the 20th Century. It will be water in the 21st Century.