Debbie Lesko is a Sucker for Con Men

Home/AZ Elections, AZ Politics/Debbie Lesko is a Sucker for Con Men
Previous Next

Debbie Lesko is a Sucker for Con Men

Apparently, Debbie Lesko has been a sucker for con men and the snake oil they sell long before she became a member of Fox Island, the Trump Zone, and Disinfowars.

Recent reporting by Ronald Hansen at AZ Central has revealed that before the current Congressional District (CD) Eight House Representative launched her career in politics, she engaged in several questionable escapades with her former husband that resulted in unpaid bills and refuge in the bankruptcy courts.

Ms. Lesko, who lived in Texas and Arizona under several aliases during the period Hansen cites,  responds that she was influenced by an abusive (currently incarcerated) ex-husband who neglected her and their daughter.

She said, “My ex-husband was a con-man who preyed on myself, and countless other innocent people, which resulted in personal financial ruin.”

A con man who takes advantage of the gullible and does not pay his bills.

Who else does that remind the reader of?

Micheal Muscato, Lesko’s opponent in the November 3, 2020 elections issued a statement responding to the Hansen article. 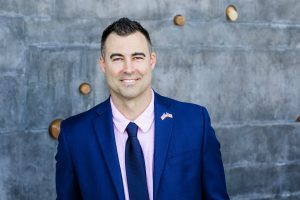 While Muscato expresses sorrow for the abusive relationship Ms. Lesko was forced to endure, the 2020 Democratic CD Eight Nominee also wondered why this information had not come to anyone’s attention earlier.

Mr. Muscato also asked the extent of Ms. Lesko’s involvement in her ex-husbands questionable/nefarious activities and whether members of the Republican Party leadership knew about it.

While the questions Muscato and Hansen have asked are very relevant and appropriate, one consideration the voters of CD Eight should ponder is Ms. Lesko’s judgment.

She has clearly demonstrated, if her account of her past is accurate, that she is a sucker for con men.

First with her ex-husband.

Then with her blind support to Donald Trump.

There is also her support for fringe right-wing dogma.

Fortunately, the residents of CD Eight do not have to be duped and rashly follow her into the Trump Zone abyss.

There is another choice they can vote for by November 3, 2020, that will serve them in this reality and not the alternative fiction espoused on Fox Island.

People in CD Eight should review what Michael Muscato believes and has to offer them as a public servant.

They may find he would be a good alternative to vote for.