Anyone who has ever been active in Democratic Party politics knows that Democrats always arrive late and no event ever starts on time.

After a slow start in early mail-in ballot returns in the first couple of weeks of early voting, for which I chastised you, Democrats finally started showing up late in the final week of early voting. Keep it up through Election Day.

Early ballot returns released Friday [Secretary of State Early Ballot Statistics] show Democrats are on track to narrow the voter-participation gap with Republicans to its lowest level in any midterm election in recent history.

That surge in Democratic participation could help the party flip close races or win contests for the U.S. Senate, secretary of state and superintendent of public instruction.

Democrats had significantly lagged Republicans when early ballot returns started coming in three weeks ago, leading some to speculate that the blue wave had crested. 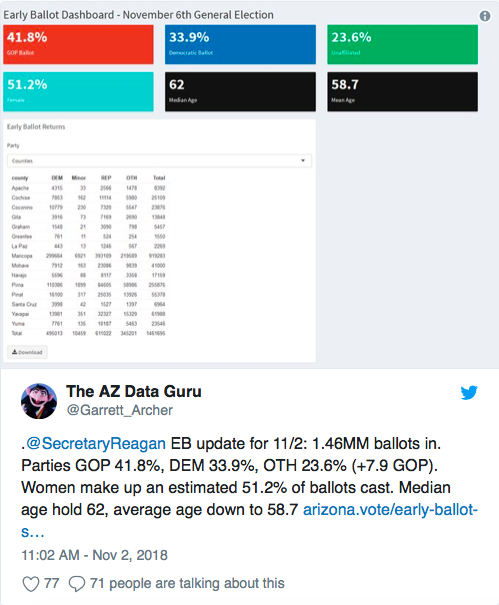 But that changed over the past week as Democrats shaved the GOP’s early-vote advantage to less than 8 percentage points. Republicans typically have a 12 percentage-point turnout edge in midterm elections.

Republicans still have a distinct advantage given they have about 136,000 more registered voters in Arizona, but the Democratic swell could swing some races.

Republican consultant Paul Bentz, of HighGround Public Affairs, said the numbers show the “blue wave is real, but it’s just a little late.” He said Democrats have made up for a slow start.

Bentz said the swell could play a deciding factor in races where polling shows Democrats are close, given strong support from women and registered independents.

He mentioned three races in particular, where HighGround’s polling shows a dead heat:

Early returns also bode well for Democrats hoping to pick up seats in the Arizona Legislature — the data shows Democrats are competing for the turnout edge in traditionally GOP-leaning suburban areas, such as Chandler and Ahwatukee Foothills.

As of Friday, more than 1.46 million voters had cast early ballots. About 75 percent of Arizona voters typically cast an early mail-in ballot, so those returns are a strong barometer.

The early-vote tally thus far still gives the GOP a clear leg up: 41.8 percent are Republicans, compared with 33.9 percent for Democrats; 24 percent are unaffiliated, according to the Secretary of State’s Office.

But the early-ballot count doesn’t indicate who individual voters cast their ballots for, and many races could have cross-over voters.

Democrats have invested heavily in Arizona this year, breaking spending records in several statewide races and fielding more candidates across the board.

Even before early returns came in, there was evidence of a Democratic swell: Voters in the August primary shattered the state’s previous record for turnout in a party-nominating contest.

The state has also seen an increase in new voter registration, particularly among those in the youngest voting-age demographic.

Josselyn Berry, co-director of Progress Now Arizona, said the swell of Democrats voting comes after years of activist work to register and turnout more young voters and voters of color.

She said MiAZ, a coalition of progressive groups, has knocked on almost 1 million doors this cycle, encouraging voters to fill out their mail-in ballots and get to the polls.

“People tend to think of Arizona as a pretty solidly red state,” Berry said. “But clearly, something big is happening.”

The AZ Data Guru‘s Twitter feed has some fascinating mapping information. Those of you living in the State of Maricopa should check it out.

Here in the “blue island” of Tucson/Pima County, Democrats are crushing it (the red areas on this map are largely sparsely populated areas. The core population of Tucson is solidly blue). 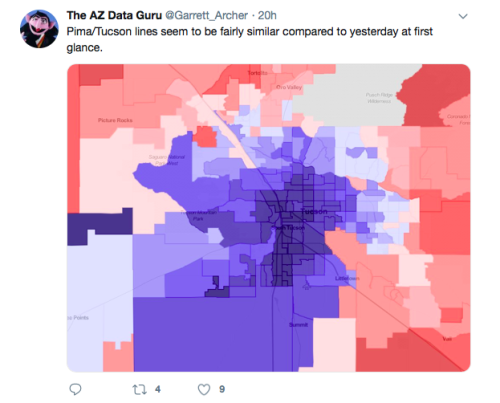 Sometime on Friday, Pima County will likely top the turnout for the entire 2014 midterm election.

And Election Day is still four days away.

Pima County voters have been pouring in early ballots at an unprecedented pace for a non-presidential election this year. The surge in votes from the state’s most reliably Democratic-leaning region is also affecting the complexion of the statewide vote.

This week, Garrett Archer of the Arizona Secretary of State’s Office noted that the turnout gap between Republicans and Democrats returning early ballots has been shrinking. In the earliest days of returns, ballots sent in by registered Republicans were outpacing those sent in by Democrats by a 12-plus percentage point margin.

On Thursday, that margin had shrunk to 8.6 percentage points, largely because of Tucson-area voters’ accelerating returns, Archer said.

Registered independents are slower voting early, having returned 52,684 ballots, or 46 percent of those mailed out.

Benny White, who volunteers analyzing voter and election data for the Pima County Republicans, said so far young voters have not turned out in big numbers.

“This whole election has been dominated by the 50- to 85-year-old voters. They’re turning their ballots in,” he said.

While Democrats and Republicans are voting as if it’s a presidential election, the unaffiliated voters haven’t shown as much enthusiasm, said Rodd McLeod, a Democratic consultant associated with several Southern Arizona candidates.

“What you’re seeing is presidential year turnout, at least among Ds and Rs,” McLeod said. “I don’t know whether we’ll see that among party-not-declared people.”

Winning them, though, may be the key if Arizona Democrats, who have a significant disadvantage statewide, are to win any statewide races.

Keep it up! There is “emergency voting” on Saturday and Monday if you still want to vote early in person. You can also drop off your early mail-in ballots (remember to sign and date the affidavit envelope).