Democrats need to hold Republicans to account for Trump, Barr, and the Oligarchical Reactionary Policies they represent.

Home/AZ Congressional Delegation, COVID-19 & Healthcare/Democrats need to hold Republicans to account for Trump, Barr, and the Oligarchical Reactionary Policies they represent.
Previous Next

Democrats need to hold Republicans to account for Trump, Barr, and the Oligarchical Reactionary Policies they represent. 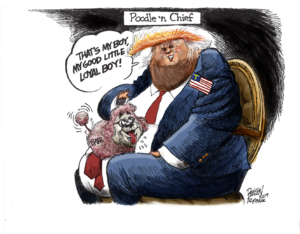 Tell the state Senator McSally do you agree with Attorney General Barr in his assertion that the President asking former White House Counsel Don McGahn to change his story about the removal (firing for those who do not get that removal means the same thing) was “not a crime.”

Tell the residents of Congressional District Six Representative Schweikert, when you are not explaining your own ethics controversies, whether it is okay that the Republican Party is led by someone endorsed by the KKK, is now referenced as “Individual One” in pending court proceedings, and has now rightly earned the title of Liar in Chief with his 10,000 and counting lies over the last two and a half years.

Tell the residents of Congressional District Eight Representative Lesko whether it is okay for a White House, in a quest to build on its authoritarian-dictatorial tendencies, not to turn over information to Congress or prevent witnesses from the administration from appearing before oversight hearings.

Tell the many residents in Congressional District Four Representative Gosar how taking away pre-condition protection, Medicaid Expansion, and the ability for young adults to stay on their parent’s insurance policy until they are 26 will help reduce the number of medically uninsured in the state and improve their health care prospects.

Tell the citizens of Arizona, Kelli Ward how environmental deregulation will make our air cleaner and our water safer to drink.

Democrats, in Arizona and across the Nation, need to hold Republicans to account for Trump, Barr, and the Oligarchical Reactionary Policies they represent.

Recent reports have indicated that Democrats in swing districts (the majority of whom are Pragmatic Progressives who won the great majority of the new House seats in 2018) are worried that focusing too much on the Mueller Investigation and the criminal/unethical acts of the President and his administration may be counterproductive and harm their chances for reelection. It is better, they say, to focus on issues like health care, climate change, and infrastructure. That is what the people are asking about in their townhall interactions with them.

This is a false choice for Democrats and they do not need to consider it. They can both discuss the issues (where they have the advantage) and challenge the Republicans to explain themselves for their positions and their defense of the 2016 Popular Vote Loser (where they also have an advantage). Do Republicans like Martha McSally, David Schweikart, Debbie Lesko, Paul Gosar, or Kelli Ward (along with other vulnerable ones across the nation like Susan Collins, Joni Ernst, Tom Tillis, and Corey Gardner) really think they can defend this President and their parties policies and the people, other than their most devout followers, will agree with them? Do they really want to answer these questions when the Democratic candidates like Anita Mailk and Captain Mark Kelly pose them during the campaign?

Democrats need to walk and chew gum at the same time. They can campaign by discussing the issues and contrast the Trumpian-Republicans behavior and positions on policies with their own. The people already agree with the Democrats on the issues and most have concluded that the Presidents character leaves a lot to be desired. Democrats should not be afraid of campaigning on both sides of the ledger and bring the total record of Trumpian-Republican dysfunction and corruption to the forefront while offering their own vision for moving the country forward.