The American Civics Act requires that all Arizona students pass a basic civics test before graduating from high school. It was the first bill Governor Ducey signed, making Arizona the first state in the country to enact such a law.

Twitter-troll-in-chief Donald Trump failed basic American Civics today. Shouldn’t there be an American Civics test for someone to run for president as well? Trump threatens Supreme Court fight in rage tweet against impeachment: ‘No crimes by me at all!’:

President Donald Trump threatened to seek relief from the U.S. Supreme Court if he’s impeached by Congress — even though, as he insisted in capital letters, he “did nothing wrong.” 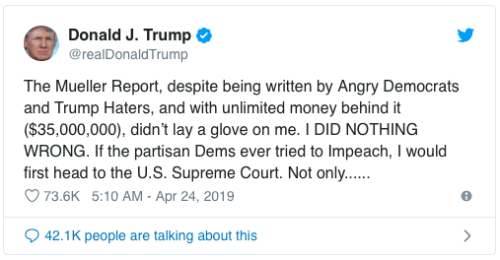 Special counsel Robert Mueller’s 22-month investigation cost taxpayers more than $25 million, about $10 million less than the figure Trump cited, and it’s not clear how Trump is justifying his threat to fight impeachment in the Supreme Court.

And, oh by the way, At a reported cost of $25 million, Mueller probe has paid for itself: thanks to fines and asset forfeitures, the investigation has netted more than that total (Paul Manafort effectively has paid for the Russia investigation). Everything Donald Trump says is a lie.

Harvard Law professor emeritus Alan Dershowitz, a staunch Trump defender –[he has completely lost any credibility]– has argued the Supreme Court could overturn impeachment, although the court has previously ruled that it should not review impeachment. 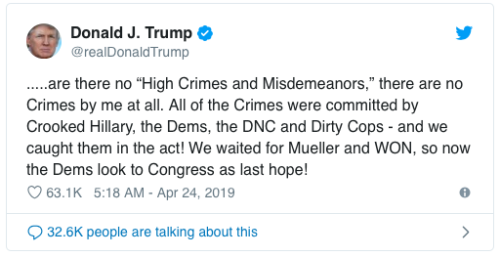 This is just batshit insane raving lunatic talk. This is a legal strategy that has no basis in reality, as experts pointed out. Law experts offer a reality check to Trump after he threatens to run to the Supreme Court if faced with impeachment:

Trump may want to use the U.S. Supreme Court to push back on attempts to impeach him for high crimes and misdemeanors, likely because of the possible obstruction charges laid out in the Mueller report, but that’s not how any of this works.

Congress has the sole power to remove the president from office. The House brings impeachment charges and, if successful in the lower chamber, the Senate acts as a jury. The courts are not a part of the process.

A number of commentators made that point Wednesday morning and bemoaned the president’s lack of understanding in the system that he’s in charge of. 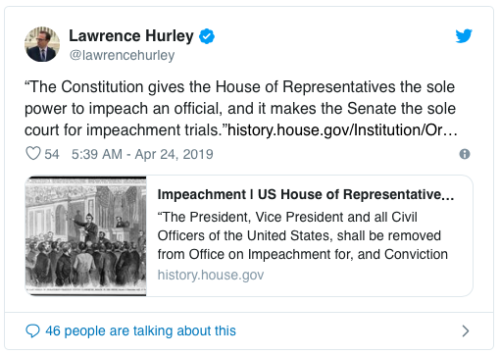 “Impeachment is a question of ‘high crimes and misdemeanors’—that is, of violations of the public trust,” said Atlantic editor Yoni Applebaum in a lengthy Twitter thread detailing the impeachment process. “And that’s a matter for Congress; Donald Trump cannot save himself by appealing to the Supreme Court.” 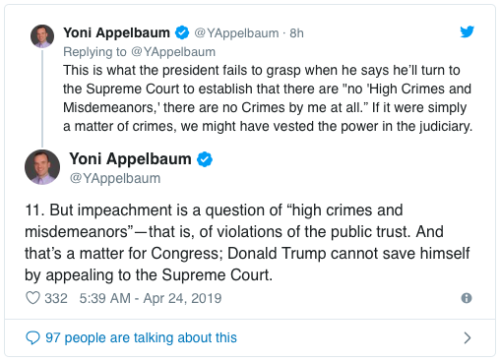 “So much wrong with this president and with the election of a man who is ignorant about the Constitution,” said Joyce Vance, a former U.S. attorney and current professor of law at the University of Alabama. “So worrisome he believes the Court will save him, no matter what.” 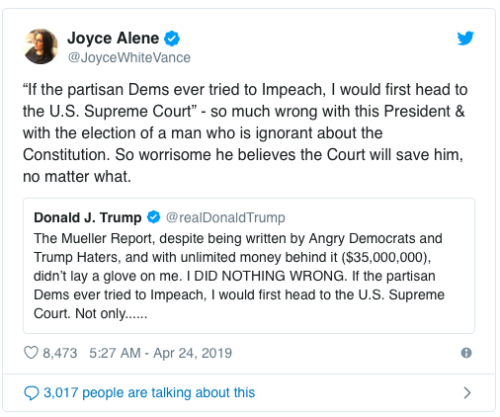 The utter ignorance of this man should embarrass and shame all Americans.

On Wednesday, law professors Joshua Matz and Laurence Tribe explained, in an excerpt from their upcoming book, why President Donald Trump’s new threat to lean on the Supreme Court to block potential impeachment proceedings is completely meritless — and why the system was set up explicitly so that a president cannot do that.

“Convinced that the House would uncontrollably boil over with irrational fury, the Framers generally agreed that it couldn’t have the final say on ending presidencies,” wrote Matz and Tribe, and so they needed to create a trial system to rule on the impeachment. They did consider using the federal judiciary, Matz and Tribe noted, and several other countries do use their judicial branch to try impeachments, including Burkina Faso, Cape Verde, Djibouti, France, Mali, South Korea, and Venezuela — as well as three U.S. states for impeachment proceedings against their governors.

But ultimately, they said, “a majority of the Framers … voted against relying on the judiciary” and instead chose to hold impeachment trials in the Senate. And, they note, there are four main reasons they did this.

First, the federal courts could be filled by the president’s own appointees, whereas a Senate trial would have no such conflict of interest. Second, if a president was convicted and removed, then indicted criminally for the impeachable conduct, the same court might try the president twice. Third, because the Supreme Court is smaller than the Senate, it would potentially be easier to corrupt or buy off a majority of justices than senators. And fourth, the founders were still shaky on the idea of the Supreme Court as a co-equal branch of government and feared it might not develop the legitimacy to manage such a proceeding.

“With the Supreme Court disqualified, this left only one viable option in the federal government: the Senate,” concluded Matz and Tribe. And unfortunately for Trump, he cannot undo this clearly codified legislative check over the presidency.

Mesnard’s Pre Existing Bill is lacking but Democrats can build on...