Remember when Barack Obama’s longtime pastor, the Rev. Jeremiah Wright, made incendiary remarks about the United States and its treatment of blacks in sermons? A video included him saying, “God damn America” and characterizing the Sept. 11 attacks as “America’s chickens … coming home to roost.”

But Obama responded with his “A More Perfect Union” speech, in which he couched Rev. Wright’s remarks in the historical context of race relations in America, addressing the role of race in the campaign, inequality and privilege in America. Tim Rutten of the Los Angeles Times called it “Obama’s Lincoln Moment” after the speech.

This is what America needed and should demand from our white nationalist president today, a mea culpa and apology for his years-long campaigning on racist rhetoric that has encouraged white nationalists to engage in violence. This is not what we got today from Donald Trump.

Instead, the Trump administration is pursuing Rahm Emanuel’s advice, “You never let a serious crisis go to waste. And what I mean by that it’s an opportunity to do things you think you could not do before.”

There is no nexus between these two legislative proposals. The gunman in El Paso was not an illegal immigrant who shot up the Walmart, it was a white nationalist whose Manifesto Echoed Trump’s Language. He purchased his weapon legally, and there does not appear to be anything in his background reported in the media that a background check would have prevented him from purchasing his weapon.

Trump made a similar call to strengthen background checks after the mass shooting last year at Parkland, Fla. high school, but after meeting with the leaders of the NRA, later threatened to veto any bills passed by House Democrats seeking to do so.

And “marrying” background checks to Trump’s so-called immigration reforms is a poison pill designed to ensure that no gun control measure passes, as former Rep. David Jolly insightfully pointed out. 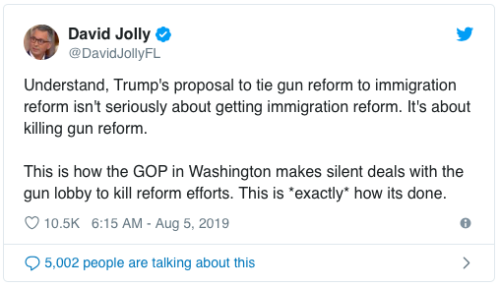 Our Twitter-troll-in-chief also blamed the “fake news” media this morning and took no personal responsibility for his own reckless and irresponsible racist hate mongering in his campaigns.

In Trump’s nationally televised address this morning, there was no mea culpa or apology for his own reckless and irresponsible racist hate mongering in his campaigns. Trump addressed the issue from a distance, as if from the outside looking in. Trump condemns white supremacy, focuses on combating mental illness over new gun-control measures:

President Trump urged the nation Monday to condemn bigotry and white supremacy after a pair of mass shootings and focused on combating mental illness over new gun-control measures in remarks delivered from the White House.

“In one voice, our nation must condemn racism, bigotry and white supremacy,” Trump said. “Hatred warps the mind, ravages the heart and devours the soul.”

Take a look at the man in the mirror, Mr. President.

Trump condemned the “two evil attacks” and vowed to act “with urgent resolve.”

He outlined a number of possible steps, including so-called “red-flag laws,” that focus on better identifying mentally ill people who should not be allowed to purchase firearms.

“Mental illness and hatred pull the trigger. Not the gun,” said Trump, who did not take questions from reporters.

He also called for cultural changes, including stopping the “the glorification of violence in our society” in video games and elsewhere.

These are two of the favorite misdirections by Republicans who are afraid to take on the merchants of death in the gun lobby. It’s the weapons, stupid.

“Our condolences are with the families and friends of those killed or injured in these horrific shootings and with all Americans affected every day by the twin horrors of hate and gun violence.

“As our nation tries to process the unthinkable yet again, it is clearer than ever that we are facing a public health crisis of gun violence fueled by racism, bigotry and hatred. The combination of easy access to assault weapons and hateful rhetoric is toxic. Psychological science has demonstrated that social contagion — the spread of thoughts, emotions and behaviors from person to person and among larger groups — is real, and may well be a factor, at least in the El Paso shooting.

“That shooting is being investigated as a hate crime, as it should be. Psychological science has demonstrated the damage that racism can inflict on its targets. Racism has been shown to have negative cognitive and behavioral effects on both children and adults and to increase anxiety, depression, self-defeating thoughts and avoidance behaviors.

“Routinely blaming mass shootings on mental illness is unfounded and stigmatizing. Research has shown that only a very small percentage of violent acts are committed by people who are diagnosed with, or in treatment for, mental illness. The rates of mental illness are roughly the same around the world, yet other countries are not experiencing these traumatic events as often as we face them. One critical factor is access to, and the lethality of, the weapons that are being used in these crimes. Adding racism, intolerance and bigotry to the mix is a recipe for disaster.

“If we want to address the gun violence that is tearing our country apart, we must keep our focus on finding evidence-based solutions. This includes restricting access to guns for people who are at risk for violence and working with psychologists and other experts to find solutions to the intolerance that is infecting our nation and the public dialogue.”

And video games? Please. This misdirection has been around since the 1980s. Video games are sold and played all over the world. Only here in the United States do we have an epidemic of gun violence. Psychology Today reports, The Evidence that Video Games Lead to Violence Is Weak:

The weekend of August 3 and 4, 2019 was a violent one in the United States. Over just a few hours, two mass shootings in El Paso, TX, and Dayton, OH, claimed over 25 lives and wounded many more. As has become routine, politicians took to the airwaves to talk about the factors that lead to these mass shootings. Dan Patrick, Lieutenant Governor of Texas focused on video games. He said, “We’ve always had guns, always had evil, but I see a video game industry that teaches young people to kill.”

As it turns out, there was a paper on the influence of violent video games on behavior in the July 2019 issue of Perspectives on Psychological Scienceby Maya Mathur and Tyler VanderWeele. In light of Lt. Governor Patrick’s comments, it would be useful to explore the evidence.

As Mathur and VenderWeele point out, there have been many studies in the psychology literature that have explored the link between video games and aggression. … There have been enough studies, that several groups of researchers have done meta-analyses of the research.

Mathur and VenderWeele looked at these meta-analyses carefully and suggest that these analyses are not really telling different stories. On their view, a detailed look at the literature on violence and video games suggests that video games probably do increase aggressive reactions, but that the effects are quite small. That is, playing a lot of violent video games probably makes people a little more aggressive overall, but not much.

When we look at horrible events like the shootings this weekend, or the more than 200 mass-shootings in the United States so far in 2019, we have to recognize that many factors play a role. Policymakers who are serious about actually addressing the issue should look for the lowest-hanging fruit and start by developing programs that address the biggest sources of violent behavior. That means that policymakers should pay attention to data that relates potential risk factors for committing a mass shooting to their actual influence on violent behavior.

When explored through that lens, video games are not a good place to start. The evidence suggests that while playing violent video games can make people act a little more aggressively in some circumstances, they do not seem to be a big enough contributor to violent behavior in the world to warrant being mentioned as a cause of mass shootings.

In the wake of the latest mass shootings, Democrats have urged Senate Majority Leader Mitch McConnell (R-Ky.) to call senators back to Washington from recess to take action.

You did not hear President Trump make a call for Congress to return to Washington in his address today.

In late February, the Democratic-led House approved the first major new firearm restrictions to advance in a generation. The proposed legislation would amend federal gun laws to require background checks for all gun sales and most gun transfers.

Federally licensed dealers are required to run background checks on people who buy guns, but private sellers who are not federally licensed are not. Under the bill, private parties would have to seek out a federal licensee to facilitate a gun deal.

The next day, the chamber passed a separate bill that would extend the time for the government to complete a background check on someone trying to buy a gun from a licensed dealer before the sale can go through.

Neither measure, each of which passed with mostly Democratic votes, has advanced in the Republican-led Senate. Trump has threatened to veto the two bills, saying they do not sufficiently protect the Second Amendment rights of gun owners.

“Instead of flailing around blaming everything under the sun, if the president is serious about ‘strong background checks’ there’s one thing he can do: Demand Sen. McConnell put the bipartisan, House-passed universal background checks bill up for a vote,” Schumer said on Twitter.

And still no call for action from Republicans.

In his inaugural address, Donald Trump painted a dystopian vision of “American carnage.” Our epidemic of gun violence is the actual “American carnage.” As Conor Friedersdorf writes at The Atlantic today, Trump Failed to Stop American Carnage. He concludes:

Americans should remember that when it comes to presiding over the nation in a time of tragedy, he offers less than all his modern predecessors. They should know that he’ll keep using the bully pulpit to stoke anxiety, fear, and bigotry, at the plausible risk of making American carnage more likely; that there is no reason to expect any improvements with time; and that judged against the words about carnage in his inaugural address, he is an undeniable failure.