Donnie and Jared’s buddies in Arabia, the Saudis, just executed a person for protesting for Democracy.

Home/Civil & Human Rights/Donnie and Jared’s buddies in Arabia, the Saudis, just executed a person for protesting for Democracy.
Previous Next

Donnie and Jared’s buddies in Arabia, the Saudis, just executed a person for protesting for Democracy. 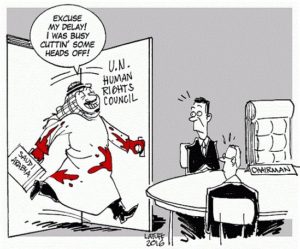 He would have been a college student in the United States had the Saudi Arabian Government not imprisoned him for participating in pro-democracy rallies while a teenager in 2011.

His incarceration, justified by a probably coerced confession (probably after torture and without access to legal counsel) sparked condemnation by Amnesty International, Reprieve, and Western Michigan University (where Al-Sweikat would have attended college.)

This week the Saudi Government executed him, by decapitation, along with 35 other people accused of various (likely fabricated in at least some instances) crimes. 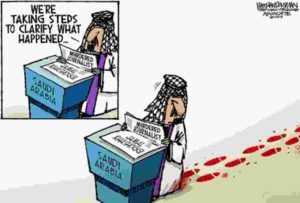 Along with the murder and dismemberment of American resident and Washington Post Journalist Jamal Khashoggi earlier this year at their Consulate in Turkey, these acts by the Saudi government should make students and practitioners of international relations wonder why the KKK President and his son in law are investing trust and monies in such a repressive regime.

What does it say about our country that it does not strongly condemn a corrupt and reactionary oligarchal system that murders journalists who write the truth or children who want a democratic life for themselves and those around them? What does it say about our President (and their surrogates like Middle East “envoy” Jared Kushner) who deal with individuals who sanction such acts and only find public support among other vile and repressive leaders like Vladimir Putin?

While the leaders of nations have to deal with both allies and adversaries in order to maintain order and stability, it does not mean that leaders like who adopt vile and atrocious means to maintain power should be catered to or praised.

The Saud family has historically been unreliable agents in the Middle East, partly responsible for spreading economic, political and sectarian strife in the region over the last century since the Americans and British, in their quest to monopolize influence over the international petroleum supply, helped legitimize the Saud Family control of the Arabian Peninsula.

The price the West has paid for supporting the Saudis (the dependency on oil, civil strife between Shiites and Sunni’s,  the suppression of democracy in the region, the emergence of Wahabism and Al Queda) has been too high.

Donnie and Jared would do better to distance themselves from their Saudi buddies and become an honest broker again in the Middle East for all the countries in the area.

If they do that, hopefully, it will lead to an Arabia where there is no one will suffer the same fate as Jamal Khashoggi or Mujtaba al-Sweikat.