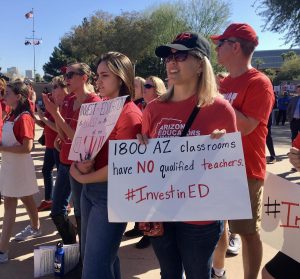 There are 1800 classrooms in the state of Arizona that do not have a qualified instructor leading children in the lessons of the day.

The average counselor to student ratio is 905 to 1.

School Buildings are crumbling and in need of repair or replacement.

Arizona Schools have not been fully funded since 2008 (it is now 2020) and it routinely shows up, despite recent increases, near the bottom of the 50 states in education funding.

This is while the average top tax cut for Arizona recipients of the Trump tax cut, according to Rebecca Gau, the Executive Director of the Arizona branch of Stand for Children is $47,000.00

This new initiative, having cleared the Legislative Council Review with only some minor grammatical corrections, if passed by voters in November 2020 would:

Mr. Thomas commented that “We’re gonna be on the ballot in November and we’re going to win.”

Mr. Lujan told the crowd that the state was “one step closer to lifting Arizona out of the basement in education funding.” He also said that eighty percent (4/5) of the people who would pay the wealth surcharge tax (remember some of these residents received an average of $47,000 in tax cuts from the Trump Administration) would see a tax increase of less than $200.00 a year.

Ms. Gau echoed Mr. Lujan and noted, perhaps in a swipe at the Republican plan to raise the 301 sales tax, that 99 percent of Arizonan taxpayers would not “pay an extra penny.”

Reverend Burnett, after using the words of an Ancient Rabbi, for criticizing Republican half measure fund measure increases as an example of “You don’t listen to their words, you look at their actions,” said “our children (in Arizona) are not worth less than the children in the other states.” 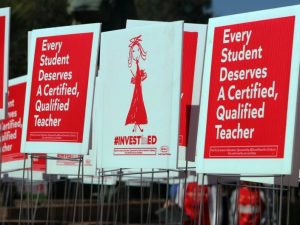 Ms. Garcia, in her closing remarks, called everyone to action to help get the residents of Arizona and “have a conversation” with the people and persuade them to sign the petition. She also asked for the crowd to grab at least one of the 1800 signs that decorated the park area to show the people that the posting represented one classroom without a qualified teacher leading it.

“The voters have said time and time again that they want education fully funding. It is about time to listen to the voters.”

It is time to listen to the voters.

It is time to give children in the states traditional and charter public schools the quality and highly funded education they deserve.

It is time for students to walk into school buildings and classrooms that do not have regularly leaking tiles, warped floors, or portable temporary buildings for extra classroom space.

It is time to give teachers, as Ms. Gau said in her remarks “a living wage.”

It is time to put the new Invest in Ed Initiative on the Ballot and pass it in November so Arizona will rise from the bottom of school funding towards the top.