It turns out that no one actually makes a clown car big enough to hold 17 clowns, not even Ringling Bros. and Barnum & Bailey Circus. (h/t DonkeyHotey). Who knew? 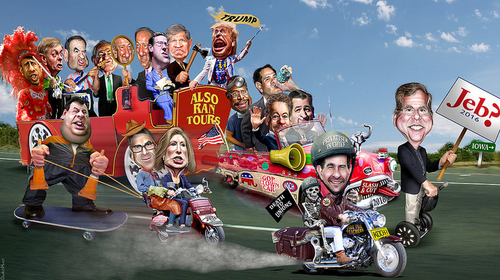 Sadly, we live in a country where FAUX News, the GOPropaganda machine, does not report the news, it decides who is the news. Or more accurately, long-time GOP operative Roger Ailes decides. Fox News announces GOP debate field.

So who made the Roger Ailes top ten finalists for The Hunger Games main debate at 9:00 p.m. EST? Topping the list, of course, is the King Kong from the Empire State, “The Donald” Trump, who has a 2-1 lead in polls over his nearest competitors. “The Donald” will be casting and throwing shade over the “bunch of losers” on the stage with him Thursday night. “You’re fired!”

Those losers include former Governor J.E.B(!) “I’m my own man” Bush (Brother? What brother? I don’t have no stinkin’ brother); “the goggle-eyed homunculus hired by Koch Industries to run their Midwest subsidiary formerly known as the state of Wisconsin,” Scott Walker; former Governor, preacher and FAUX News host Mike “Huckajesus” Huckabee (Fire up the ovens!); Rafael Ted “Calgary” Cruz (How’s it going, eh?); Senator Marco “big gulp” Rubio (I will drink no water before its time); Senator “Aqua Buddha,” Rand Paul (I’m only a half-wit, now my father, he was a complete idiot); Governor Chris “I’ll punch you in your freakin’ face!” Christie; Christie’s sparring partner, Governor John “Hot Head” Kasich; and Dr. “I’m going to say something totally outrageous to get attention” Ben Carson.

Thursday, August 6, 5:30 p.m.: Pima County Young Democrats Debate Watch Bingo, at The Shanty, 401 E. 9th Street, Tucson, AZ. It is that time again for the 2016 GOP presidential debate and the Pima County Young Democrats want to celebrate this glorious occasion by playing GOP presidential bingo! Donald Trump mentions how rich he is? Mark the spot on the bingo card! Ricky Perry forgets his policy ideas? Mark the spot on the bingo card. Any candidate mentions Ayn Rand? Mark the spot on the bingo card.  Bingo cards can be purchased for $10 each and all money raised will be donated to the Pima County Democrat Party. There will be great prizes to win and great times to be had!  So come by the Shanty with your fellow democrats, talk a little politics, drink a little beer and most importantly laugh a lot! Pima County Young Democrats.