The Wall Street Journal (subscription required) reported on Thursday that Trump has floated the idea of purchasing Greenland from Denmark. Since then, the media has run wild with this story.

From everything I have read since, I have to say that I think Rachel Maddow may have come closest to the truth with her funny take on Thursday night’s program when she suggested that someone has played a practical joke on our easily gullible occupant of the White House. Transcript 8/15/19:

So us talking about it, I feel a little bit like we`re being complicit in that other person`s mean trick. Now, we don`t know who that other person is who`s playing this joke on President Trump. The way “The Wall Street Journal” describes it as such.

Quote: At a dinner with associates last spring, Mr. Trump said someone had told him at a roundtable that Denmark was having financial trouble over its assistance to Greenland. That person suggested he should consider buying the island. What do you guys think about that, the president asked the room. Do you think it would work?

And you know what, that is a mean thing to do to a gullible person. I mean to say to them like in all seriousness totally deadpan, hey, you know, big guy, you could buy Greenland.

But according to “The Wall Street Journal”, the joke still doesn`t quite make sense to President Trump. He may not have grasped exactly what was going on in that moment. I mean according to people familiar with the discussions, “The Wall Street Journal” says Mr. Trump has repeatedly since then expressed interest, since whoever this was first suggested to him, hey, big guy, maybe buy Greenland, he has apparently repeatedly expressed interest in actually trying to do so.

Quote: In meetings at dinners and in passing conversations, Mr. Trump has asked advisers whether the U.S. can acquire Greenland.

So, I know – sometimes I have a hard time with the news. And I know that this is like the number one trending topic worldwide right now. I know it is a very popular topic of conversation this evening for all of the obvious reasons.

But I will just say, if you know the president, if you are – you know, you go to dinners with him, you go to roundtables with him, whatever, if you are in position to play this kind of a mean joke on President Trump, understanding the contours of his mind and his ego and knowing he might not really get that it`s a joke and he might really run off with it and think he could do it – I mean, just do the country a favor and make it a more constructive joke.

I mean, you could have just as easily told him, hey, Don, I heard Greenland is looking for a king. They want a new monarch with dictatorial powers and you get like 10 planes, I heard. I heard you could totally do that if you gave up being president and you went there and asked them. I heard they`re super interested in you. I mean, if you`re going to play a joke on him, right, tell him that.

I mean, if you know how his mind works, if you are going to play a joke on a president for whom nothing is off limits and nothing is ridiculous as long as it might provide him something he wants, then pick something that would help the country, or that at least would be harmless or funny in the long run. I mean, now, this guy is actually going to go try to buy – I mean, he`s due to go to Denmark next month. Right now, it appears he actually thinks he can buy Greenland and he might try to on behalf of the United States of America in real life, and that would make for an excellent plot for a Simpsons episode. I`m sure some day this will make a hilarious off-Broadway musical, right?

I mean, choose your jokes carefully with this particular mind. He will believe what you tell him. The fail-safes won`t work, right? The intelligence community will show up to brief him that, sir, it`s not actually possible for you to buy Greenland, and he`ll dismiss them and call them the deep state, and the only hope for shaking this idea loose out of his head will be a “Fox & Friends” can somehow be drafted on behalf of the nation to fact check this someday to break the sad news to him. I mean, like how else do we get out of this problem now? This is our life now.

It appears that Denmark was not in on this practical joke, and does not find it funny. ‘Final proof that he has gone mad’: Denmark mocks Trump’s reported desire to buy Greenland:

Amid reports that President Donald Trump has directed aides to examine whether the United States can purchase Greenland—an autonomous territory of Denmark—Danish lawmakers on Friday condemned the idea as both absurd and “grotesque.”

“If he is truly contemplating this, then this is final proof that he has gone mad,” Soren Espersen, foreign affairs spokesman for the Danish People’s Party, told local broadcaster DR. “The thought of Denmark selling 50,000 citizens to the United States is completely ridiculous.”

“We are talking about real people and you can’t just sell Greenland like an old colonial power. But what we can take seriously is that the U.S. stakes and interest in the Arctic is significantly on the rise.” — Martin Lidegaard, Danish Social Liberal Party.

Greenland’s foreign minister has spoken out against President Donald Trump’s reported interest in buying the autonomous Danish territory for the United States. “We are open for business, but we’re NOT for sale,” Ane Lone Bagger told Reuters on Friday.

Lars Lokke Rasmussen, Denmark’s former prime minister, tweeted that Trump’s idea must be “an April Fool’s Day joke… but totally out of season!” 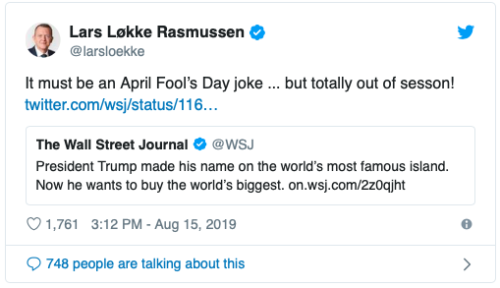 The New York Daily News on Saturday reworked one of its classic front pages – the Daily News’ iconic October 1975 headline “Ford to City: Drop Dead,” which it published after then-President Gerald Ford pledged to veto a bill to bail New York City out of its financial crisis – to poke fun at President Donald Trump’s reported interest in buying Greenland for the United States. (h/t Huffington Post). In the case of Greenland, the rise of self-determination has manifested as a series of measures giving Greenland increased autonomy. Beginning with the 1978 Home Rule Act, the Kingdom of Denmark has gradually allowed Greenland to exercise self-government over a greater sphere of its affairs, often in response to demands by native Greenland residents. Most recently, in 2009, this trend resulted in the Act on Greenland Self-Government, which expressly recognized that “the people of Greenland is a people pursuant to international law with the right of self-determination” and devolved control over an even greater scope of activities to Greenland’s own government. This includes foreign affairs: The legislation authorized Greenland to enter into international agreements on its own regarding matters that solely affect Greenland’s interests, while setting up consultation requirements for any international agreements that Denmark may wish to pursue that implicate Greenland. Finally, the act also sets out a process through which Greenland can choose to seek its own independence. This process ultimately requires a referendum of Greenland residents as well as approval by the parliaments of both Denmark and Greenland.

These legal rights all promise to complicate any effort to “buy” Greenland. Even if the United States does not see the people of Greenland’s right to self-determination as an obstacle—a real possibility given the Trump administration’’s deep skepticism of international law and institutions—Denmark almost certainly does. Under the 2009 act, it seems unlikely that Denmark views itself as having the legal authority to enter into a treaty effectuating such a “sale” without the permission of Greenland’s parliament. And even if Denmark could do so under the strict statutory terms of the act, this would be inconsistent with Denmark’s own express recognition of Greenland’s residents as a “people” entitled to self-determination and the international legal obligations that flow from it.

Before the United States – a country deep in debt and falling apart because we have not adequately funded infrastructure improvements for decades – considers buying a new territory, that money would be better spent addressing our immediate needs here at home first.

UPDATE: Doubling down on his buffoonery, Trump confirms Greenland interest, likens it to ‘a large real estate deal’:

“It’s just something we’ve talked about,” Trump told reporters when asked about the idea. “Denmark essentially owns it. We’re very good allies with Denmark. We’ve protected Denmark like we protect large portions of the world, so the concept came up.”

“Strategically it’s interesting and we’d be interested, but we’ll talk to them a little bit. It’s not No. 1 on the burner, I can tell you that,” the president said.

“Essentially, it’s a large real estate deal. A lot of things can be done. It’s hurting Denmark very badly, because they’re losing almost $700 million a year carrying it. So they carry it at a great loss,” he said.

Trump is expected to visit Denmark in September as part of a trip to Europe.

Trump Can’t Buy Greenland and its citizens as if they are a commodity to be bought and sold. Greenlanders have the final say in their right of self-determination and self-government.

If Barron Trump does not have to go to school in person, Why is his Father trying to force other families to do so

More Reaction to the Obtuse Court Ruling on Invest in Education

Joe Biden Unveils the Fourth Phase of his Build Back Better...

The 2020 Republican National Convention is a dumpster fire