In her Interview with Donald Trump, Maria Bartiromo shows Journalists What Not to Do

Home/National Elections, National Politics/In her Interview with Donald Trump, Maria Bartiromo shows Journalists What Not to Do
Previous Next

In her Interview with Donald Trump, Maria Bartiromo shows Journalists What Not to Do

Saying “the facts are on your side,” “this is about America,” “this is disgusting. We cannot allow America’s election to be corrupted,” Fox Television “Journalist” Maria Bartiromo provided 2016 and 2020 Popular Vote Loser Donald Trump with a platform this morning (November 29, 2020) to vent his discredited allegations of fraud in the November 3 elections.

Among Trump’s false or questionable claims and statements during this event were:

Bartiromo did actually ask, on the surface, reasonable questions but she couched it with selective citations and sources from Reuters and the Federalist Society. Trump gave unhinged answers or evaded the questions.

What about all the judges that ruled against you?

Trump said, “Judges don’t want to get involved.” Trump neglected to mention that his lawyers have never presented evidence of substantial fraud in any of the over 30 hearings they and their allies have lost.

What about the FBI and Justice Department getting involved (she asked this twice?)

Trump said they are “missing in action.”

What other evidence do you have that you can prove this in court (she obviously forgot about the over 30 cases that have been thrown out in part because of lack of evidence?)

“We’re trying to put the evidence in and the judges (including conservative ones, some of whom appointed by Trump) will not allow us to do it.”

He did not answer that question.

When would he take his case to the Supreme Court (she asked that twice too?)

He would not say.

The mainstream media has wasted no time in condemning Ms. Bartiromo’s “approach” to Mr. Trump.

“Let’s be clear. Maria Bartiromo is not interviewing the President. She is providing him a free platform to feed his base talking points uncontested. (Yum yum!) This is propaganda. Watching Maria is like watching an infomercial. ‘Can you tell me more about how, how this blender could really make me a smoothie? Please show me how!’ This is the level of questioning we are seeing here. Whew Maria went all in on at least three different conspiracies at the 10:42 min mark. She’s way off the deep end. This isn’t a Trump problem, it’s a Fox problem.”

Brian Stelter, the host of Reliable Sources, commented that Trump was “unable or unwilling to accept reality.”

He also said of Bartiromo:

“Maria Bartiromo, once a feared and acclaimed journalist, best known for working the floor of the New York Stock Exchange, forcing CEOs to tell the truth, now sits behind a desk and invites the president to lie and lie and lie.”

“Frankly, there is not much daylight between Maria and [Infowars conspiracy theorist] Alex Jones.”

Journalists are not supposed to:

Maria Bartiromo did all of these things in her “interview” of Donald Trump by embracing his discredited statements and positions.

She has shown all journalists what not to do when given this opportunity.

This is another reason not to watch certain shows, like hers, on Fox Island.

People are better off to watch or read from the below mainstream sources: 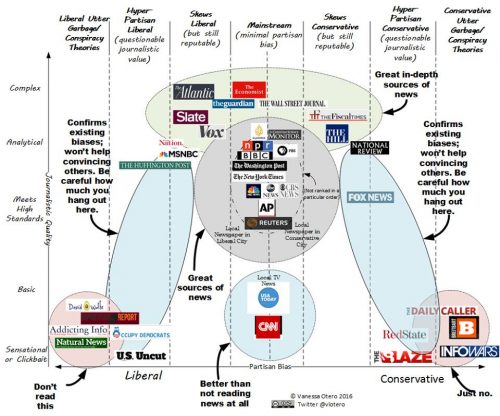 Stay anchored in reality by keeping away from sources like Fox Island and Disinfowars.