Is Donald Trump “Tilting at Windmills?”

Is Donald Trump “Tilting at Windmills?”

Does Donald Trump think he is Don Quixote? 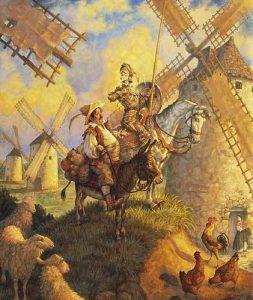 In one of the first epic novels in Human Civilization, The Ingenious Gentleman Don Quixote of La Mancha, written by Miguel Cervantes, the title character attacks 30 to 40  windmills, thinking they are all dangerous giants.

Don Quixote is injured in the attack and believes that the giants, thanks to the power of a magician, became windmills.

The phrase “tilting at windmills” which means “to attack imaginary enemies”  is based on this episode in the Cervantes epic.

Donald Trump, the stable genius, seems to be, as evidenced by his rehashing of the threat wind power poses, seems to be “tilting at windmills.” 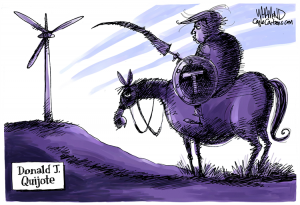 Speaking to the Turning Points Conference on December 21, 2019, Mr. Trump said that:

“You know, I know windmills very much. I’ve studied it better than anybody I know….”It’s very expensive. They’re made in China and Germany mostly — very few made here, almost none. But they’re manufactured tremendous — if you’re into this — tremendous fumes. Gases are spewing into the atmosphere. You know we have a world, right? So the world is tiny compared to the universe. You talk about the carbon footprint — fumes are spewing into the air. Right? Spewing. Whether it’s in China, Germany, it’s going into the air. It’s our air, their air, everything — right?” 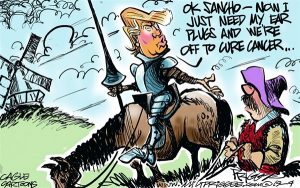 Earlier in the year, he claimed that windmills and wind turbines drastically drove down property values (like the ones by his resort in Scottland where he lost a lawsuit attempting to stop their construction,) cause cancer, kill many birds, and is unreliable when the wind does not blow.

Mr. Trump’s comments over the last weekend are depicted below:

Suffice it to say, these claims (on property prices, cancer, and unreliability) like the other 15,000 “misstatements” Mr. Trump has made, have been largely debunked.

The only claim that has a degree of merit is the death of birds. Many birds have died (about 234,000)  by flying into wind turbines but there have been measures adopted to protect as many as possible. People should also consider that just under six hundred million birds die by flying into large buildings like Trump Tower.

It is time this country had a President that believes in science and investing in the renewable energy infrastructure of the future.  This nation does not need a Chief Executive that “tilts at the windmills.”