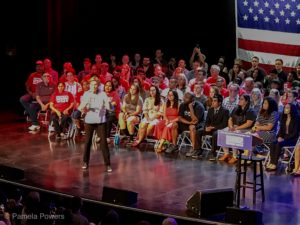 In 1980 the Jimmy Carter people were thrilled to have Ronald Reagan as a general election opponent, thinking, wrongly as it turned out, that the Wall Street loving Republican nominee would be too extreme for voters to put in the White House.

Could history be repeating itself in the opposite direction?

Is Elizabeth Warren, the champion of those on Main Street, the Democratic Ronald Reagan that could inaugurate a new progressive age by defeating popular vote loser and KKK endorsed candidate Donald Trump, a person that makes Jimmy Carter look like the combined version of Moses, George Washington, and Abraham Lincoln all rolled into one.

This evening (August 1, 2019) on the Tempe/Phoenix border at the Marquee Theater, Senator Elizabeth Warren spoke to a jammed packed crowd of 3500 enthusiastic supporters and showed how she may be the Democratic Reagan.

People gathered well before the 4:30 p.m. check-in time at the Marquee Theater, standing in long lines and enduring the over 100-degree temperature to see Senator Warren.

Journalists from outlets like the Blog for Arizona, CBS News, Fox, ABC News, Telemundo, the Arizona Republic, Az Family, the Washington Post, and CNN were there to cover the event.

When people started crowding into the theater, some offered their reasons for attending.

Michelle Lasch from Superior Arizona said she wanted to learn more about Warren, commenting that “Democrats have to have a platform …and a candidate that has a candidate that is workable and not a fairy tale.” She also said that Trump has “ripped the scab off the hatred” some Americans feel and the country needs a “realistic person that can unite us.”

Michelle’s friend from Mesa, Kaden Sheffield, said that the most important goal for 2020 was to beat Trump and she “would back anyone that can beat” him.

Carol Smith, an English teacher from Gilbert said she “was really excited” to come to the event, wanted to hear Warren’s views on helping students pay off their student debt, and was pleased that “so many people are running this year.” 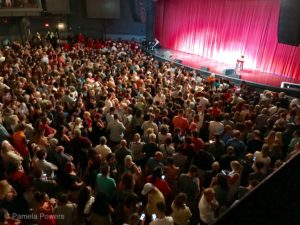 3500 people packed into the Marquee Theater on the Tempe/Phoenix Border to see Senator Elizabeth Warren. There was also an overflow crowd in the hundreds that waited outside. The Senator spoke with them first. Photo courtesy of Pamela Powers Hanley

The event, scheduled to begin at 6:15 p.m. had a packed theater by 5:15 p.m. The program was delayed because Senator Warren wanted to address the overflowing crowd that could not, per the fire code, enter the theater.

With Warren supporters holding “Warren 2020” and “Dream Big Fight Hard” signs while chanting her name while listening to musical numbers like “Stand by Me,” “My Girl,” “I’ve Got Sunshine on a Cloudy Day,” and “Hooked on a Feeling,” Congressional District Three Representative Raul Grijalva started the program by giving a spirited introduction to the Senator, saying electing Warren was necessary “to take us out of the darkness we find ourselves in.” He further commented that Warren possed “qualities of intellect and decency…. that the current occupant of the White House lacks.”

Grijalva finished by saying Warren was “smart, had guts, and has a vision crafted to lead” before introducing her as “the next President of the United States.”

Saying “Hello Arizona” to thunderous applause. Senator Warren appeared before the ecstatic audience echoing some of the crowd shouting to turn “Arizona Blue.”

She would later comment that this was her 116th townhall, joking that “it is amazing how many you can have when you are not sitting behind closed doors with millionaires.”

In starting her address, the Senator started by recounting her life’s experiences, describing how her family struggled at times to make ends meet and how she became a teacher (by paying her tuition on her salary as a part-time waitress,) then a lawyer (when law school tuition at her school was only $450 a semester) and then an instructor (law professor) again.

The Senator, recounting a remark from her mother when times were difficult, said that “no matter how hard it looks….you pull it up and take care of the ones you love,” finishing it by saying “that is what Americans do.”

Warren reminisced about how a minimum wage when she was growing up could support a family of three compared to how today, that same family would be in poverty.

Saying “what is happening to the working families in America and why is the middle class being hollowed out,” she launched a blistering critique of the government and its members devoting to Big Pharma, The fossil fuel industry, and private prison sponsors rather than the ill, the climate, and the people needing rehabilitation.

Pledging to be a champion of the people who “would attack the corruption head-on and knock back the influence of monied interests,” she offered several solutions to level the playing field between the one percent and the rest of the American people. These solutions included:

The Senator then discussed immigration, blaming the Trump Administration for making the country weaker, not stronger, with its draconian measures. She offered her own solutions for solving the problem which included:

Oddly, the Senator did not mention anything about strongly defending our borders with added security. That is something she will need to address if she earns the Democratic Party’s nomination.

Warren then delved into Climate Change, calling it “the urgent crisis of our time.” She proposed a multi-billion dollar investments in” research and innovation” that would access the “$23 trillion market for clean energy” and “create 1.1 million new highly paid union jobs” in the alternative energy sector in this country.

Warren then blamed the influence of the National Rifle Association (N.R.A.) for not getting sensible gun control legislation through.

The Senator started to finish her address on a very sunny optimistic “Reaganesque-Humphrey-Obama” Happy Warrior note, referencing the struggles of the union worker, the civil rights advocate, and the LGBTQ Community Member who persevered, did not quit when others said, “this is too hard, quit now” and “built grassroots movements that changed the course of American History.”

The rally was a mostly festive occasion. Almost everyone was enthused about what the Senator had to say and what she stood for.

One of the audience members, who wanted to go by her first name April said Warren’s address was “great and articulate” and that she “made very strong points” and would “make a strong President.”

A friend of April’s, Josephine said that Warren “knows the direction we need to be going as a country.”

Michelle Rose, a Warren volunteer, described the Senator as “authentic and she is on the right side of issues before it was popular.” Michelle loved that Warren took the time to speak to the overflow crowd waiting outside in the heat first and finished by saying she did not think Warren “would sell us out.”

There was one unfortunate incident at the event when the Senator was describing how the wealth tax would help the middle and lower classes when members of the Arizona Patriot Movement (a pro-Trump White Nationalist fringe group) were being escorted out for being disruptive and a pro-Warren individual decided to exchange colorful metaphors with them, causing security to engage in a minor rumble as all quarreling parties were removed from the theater.

While taking pictures with members of the audience, the Senator took a few moments to answer questions before a press gaggle and reaffirmed her views on issues like impeaching Trump, the strength of her grassroots movement, and her perspective on immigration.

In 1980, no one thought that Ronald Reagan could win the White House because he was too extreme and beholden to the plutocratic class. He won and ushered in a new conservative age.

It is now 40 years later and the majority of the country wants a new progressive direction from the one Reagan first charted and his party exasperated.

Senator Warren’s views are mostly in sync with most of the people who support progressive measures like a wealth tax, universal and affordable health care, a living wage for everyone, and major investments in education, infrastructure and combatting climate change.

The time may be right for a Democratic Reagan to lead the country into a new Progressive age and that person may be Senator Elizabeth Warren.