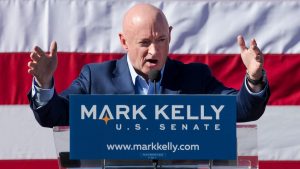 That was bad for McSally because that was her best quarter fundraising so far and Kelly still crushed her in the money game.

It also hurts that the appointed successor to John McCain is trailing in most polls right now.

It is not just Captain Kelly that is doing well right now.

Trump sycophant and Joe Biden backstabber Lindsey Graham lost the quarterly fundraising race to Democratic challenger Jamie Harrison by about a million and a half dollars.

In Maine, the State Speaker of the House Sara Gideon trounced Susan Collins by close to five million dollars.

Even in Iowa and Michigan, the lead Democratic challenger (Theresa Greenfield in Iowa) and incumbent (Gary Peters in Michigan) were competing fairly well against Joni Ernst and John James.

While this news is very encouraging, it is vital that voters remain two key points.

It is very important that voters stay engaged, pay attention to what is happening in the country, around the world and in the campaigns in their area.

Voters also need to remember that while it is important that Joe Biden wins the Presidency and Mitch McConnell is retired from the Senate, it is also vital that Democrats make additional gains in Congress.

Furthermore, people need to be mindful of the local, county, and statewide offices being held across the country. They are just as important as the federal races because that is where most of the decisions that affect the daily lives of the nation’s citizens are made.

Please remember to register/sign up for the Permanent Early Voting List (PEVL) in Arizona or any state that allows early or absentee balloting and mail in your vote by November 3, 2020. Please also remember to get any voter id a state or county office may need to process your ballot.

Remember election day is only 201 days away.