“I want to close by thanking the voters of Arizona. Because of your participation, our Democratic institutions thrive. So stay engaged and keep voting. Thank you very much for joining us today.”

With those final words, Arizona Secretary of State Katie Hobbs closed the Certification Ceremony officially formalizing the ballot results of the November 3, 2020 elections.

Joe Biden has been declared the winner of Arizona.

Mark Kelly is now Arizona’s newest Senator. Governor Doug Ducey, a witness at the ceremony, said that he would immediately inform the United States Senate so Captain Kelly can take the oath in the next couple of days.

Invest in Ed-Proposition 208 is now the law of the land.

Opening the Certification Ceremony, Secretary Hobbs told the audience that Arizona took part in a historic election despite the pandemic. She commented further that:

“In spite of the pandemic, we had an extremely well-run election and saw historically high voter participation. There were more than 3.42 million ballots cast in this election and turnout was nearly 80 percent. This is a 23 percent increase from the 2018 midterm election and an eight percent increase from the 2016 Presidential Election. Of those 3.42 million ballots cast, over 88 percent of them were cast early which provides more proof that Arizona’s ballot by mail system works. Additionally, despite the unprecedented challenges, Arizonans showed up for our Democracy. Every Arizona voter has my thanks and should know that this election was conducted with transparency, accuracy, and fairness in accordance with Arizona’s laws and election procedures despite numerous unfounded claims to the contrary.”

Secretary Hobbs then explained all the safeguards that were in place to ensure a fair and secure election. These measures included:

Before turning to the Governor for his comments, she thanked everyone who made the Arizona elections (by quoting former Homeland Security official Chris Krebs) “the smoothest and most secure election in history,”  demonstrating “Democracy is indeed a team sport,” and making it so “no Arizonan had to choose between their health and their fundamental right to vote.” 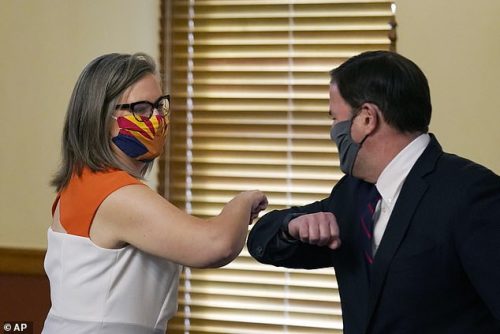 Governor Ducey echoed Secretary Hobbs in thanking everyone that made the Arizona elections a success.

Saying “no voter should be disenfranchised,” the Governor earlier commented about the investments made to ensure election fairness and security. He also said:

“The Pandemic brought new challenges for the state. We do elections well here in Arizona. The system is strong and that is why I brag about it so much.”

After the Secretary of State and Governor’s statements, they along with Arizona Attorney General Mark Brnovich and Arizona Supreme Court Chief Justice Robert Brutinel signed the election certification documents.

Unfortunately for the great majority of the people in Arizona, there are still, despite the Republican Governor, Republican Attorney General, and Republican Supreme Court Chief Justice signing the certification documents, fringe elements led by reactionary figures like Republican State Party Chairperson Kelli Ward, Mark Finchem, Paul Gosar, and Andy Biggs, who are still carrying the Trump Banner of Disinformation regarding this election.

When asked about what steps she and her office would take to counter Ward and the other Trumpists, Secretary Hobbs commented that her team has continually informed and updated voters of the election procedures, processes, and safeguards. She also said that information on post-election audit procedures, some of whom she described during the ceremony, was also made to voters.

When asked why she felt so many people still felt the election was not conducted fairly, she stated:

“There’s a group of people that are never going to believe or choose not to believe the results. If it was the other way (with Trump winning Arizona,) we would not be having this conversation.”

The Secretary and her family are under continued Department of Public Safety and Phoenix protection stemming from death threats received shortly after the election. The Hobbs Family had to shut off access to various social media sites so they would not have to see the “nastiness” that came through.  While nothing major has recently surfaced, Secretary Hobbs did express concern that more threats may happen following the unofficial Finchem led Republican disinformation event today.

The election is over.

It is time to accept reality, come together, and work to move Arizona and the country forward by overcoming the COVID 19 Pandemic and rebuilding the economy and middle class.

It is time to put polarization in the dustbin of history and as Secretary Hobbs said about the election “make Democratic institutions thrive.”