LD 17 Democratic Senate Candidate Ajlan “AJ” Kurdoglu wants everyone to experience the American Dream like He Has.

LD 17 Democratic Senate Candidate Ajlan “AJ” Kurdoglu wants everyone to experience the American Dream like He Has. 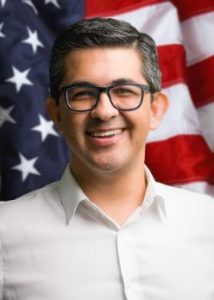 Arizona is becoming bluer with each successive electoral cycle over the last four years.

Legislative District (LD) 17, an area that contains parts of Gilbert, Chandler and Sun Lakes, is a prime example of that trend.

In 2018, Democrat Jennifer Pawlik received the most votes of the State House Candidates running in LD 17 and Senate Candidate Steve Weichert came very close to upsetting the then Speaker of the Arizona House JD Mesnard.

In 2020, LD 17 is again a district many political observers are looking to as an indicator of whether this will again be a year for increased Democratic gains that could result in their achieving the majority in the State House and Senate.

An immigrant that has achieved the American Dream and became a United States Citizen, Mr. Kurdoglu, an Arizona resident for the last 20 years, wants everyone in LD 17 to have the same opportunities for success that America has given him.

A pragmatic progressive, he believes in forward solutions based on empirical information and data.

Mr. Kurdoglu graciously sat and relayed his qualifications for office and positions on the vital issues facing the state.

Mr. Kurdoglu is from Istanbul, Turkey. Saying “I am the proud product of a free public education,” he became an industrial engineer after finishing college in Turkey. He then attended the Thunderbird Graduate School for International Management in Arizona and has stayed here ever since.

“Afterwards, I decided to become a citizen and I am proud to be a first-generation American. I know the immigration journey and I know the sacrifices required. I started and own several retail stores in designer furniture and interior design. When you own a small business, you realize how many challenges there are with competition with larger businesses and government regulations. I am in a relationship with the love of my life, a schoolteacher in the Cartwright District. We have no children but I am the most fun uncle ever.”

“ I am an engineer and small business owner. That really made an impact on me because I am pragmatic and am always looking for the best outcome under the best situation we are in and improve for the future. The third is I am an immigrant who will bring a fresh voice to the legislature.”

“I have a real-life outside of politics and am not looking to be a career politician. I bring a fresh perspective and will not be worried about continuously running for reelection. I want to improve the lives of LD 17 residents and everyone in the state through better education, improved health care, and by promoting a more transparent Democratic process. I will work for the people’s interests and be a pragmatic problem solver, not an ideologue endorsed by ALEC. “

“I want to have qualified teachers in ALL of our classrooms, reduce the teacher turnover rate and pay them more. This could be improved with a diversified legislative membership and leadership team. I also am in favor of greater charter school accountability. I support increasing rural broadband and providing laptops to children who need them to reduce the digital divide. It is important to educate children in their early ages. We should be able to provide pre-kindergarten and full-day kindergarten options. College tuition should be as free as possible per the Arizona constitution. This includes the provision of free community college as well as an increase in funding for post-secondary institutions to make college more accessible for the students instead of having them footing a large bill. I support fully funding our schools and will work to do so in the legislature”

“I want Arizonans to have a healthy lifestyle where they have access to healthcare when they need it. I want us to be certain that Arizona citizens do not go broke because of an illness to ensure their economic future is not jeopardized. We should expand access to KidsCare and allow citizens to purchase insurance through our state’s Medicaid system should they need more affordable healthcare options. I also support greater access to telehealth, especially in light of this current pandemic. “

“ I support more solar power. We need to push that more than. I also want to preserve and conserve the water supply and use it carefully.”

“We need to improve early childhood education. We also need to get our children better-paid teachers and reduce the digital divide to make them more successful.”

“Housing is the biggest issue. We have to work hard to increase the supply of affordable housing and help to reduce homelessness. We have to find ways for people to gain better access to state resources.”

“I have the utmost respect for public safety and law enforcement officials. I am not a fan of private prisons. I find it fundamentally wrong and support bail reform so people are not stuck in jail because they cannot afford bail. We need to eliminate for-profit private prisons.”

“I have the immense love and respect for the generosity of the American people and our country. The Federal Government should approach immigration in a dignified and fair manner where there is a system that works efficiently and fairly. America is the greatest country in the world and it is that way because it was built on immigration. I favor secure borders. “

“No one should be discriminated against – period. I will work for equal pay for equal work. I also want to work on prohibiting conversion therapy. We have to work to reduce food deserts to help the poor and minorities and create food security for all.”

“We have to improve participation in the political process by supporting citizen-led initiatives, unlike the current Republican majority. They are deliberately trying to make our lives less convenient. That is un-American. I’m also in favor of allowing citizens to sign initiative petitions online, as we currently allow for candidate petitions.”

“I will work hard for LD 17, for our neighbors and for Arizona; I am excited, motivated and ready to get the job done.”

The people residing in LD 17 should ask if JD Mesnard represents their interests. While the former State Speaker has routinely supported tax cut measures, his voting record shows that he will not:

Ajlan “A.J.” Kurdoglu represents a forward-looking, problem-solving and inclusive choice for the residents of LD 17.

He will fight for the disadvantaged and the disenfranchised.

He will support legislation that moves the state and the people forward, not backward.

He will work every day at the State Capitol to make sure everyone in LD 17 can get a fair shot at the American Dream.

Please remember to register/sign up for the Permanent Early Voting List (PEVL)in Arizona or any state that allows early or absentee balloting and mail in your vote by November 3, 2020.