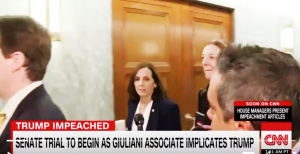 For a veteran combat pilot who has been decorated for heroism on the battlefield, Martha McSally is not a tough one to crack.

Earlier today, as already reported by AZ Blue Meanie and virtually every other political outlet, Senator McSally, currently behind Captain Mark Kelly in recent polls,  became the symbol of the difficulties all Republican Senators face when confronted with reality by non-Fox or Alt-Right commentators.

In the hall of the Senate, she called CNN Journalist Manu Raju “a liberal hack” twice when he asked whether new evidence should be considered at the Senate Impeachment Trial of Donald Trump.

No wonder Moscow Mitch wants to insulate his Republican Senators from the press.

Memories of the scene from the movie “A Few Good Men” with Jack Nicholson famously reciting “You Can’t Handle the Truth” comes to mind when seeing McSally walk past Raju.

She and most of the other Republicans can not handle the truth that their cult leader is a crook.

Just yesterday, Maine Senator and fellow electorally endangered Republican Susan Collins had a deer in a headlight moment when confronted with the latest revelations on the Ukraine investigation by Lev Parnas. Instead of saying I would want to review this evidence, Collins blamed the Democrats for prematurely ending the impeachment inquiry before receiving the documents.

“In December, the Associated Press reported on McSally definitively ruling out any pretense of being an “impartial” juror. According to the report, McSally:
Said House Democrats committed “the only abuse of power that we’ve seen going on here”

“Echo[ed]” Mitch McConnell’s pledge on “working closely with the White House”; and
admitted Republicans are opposing the “minefield” of witnesses testimony from “some people” because “we don’t know how that’s going to go.”

“For months, McSally has refused to be forthright with Arizonans when it comes to getting to the facts of the case:”

“McSally infamously “literally went around the Capitol, around parked cars, everything, to avoid cameras” and reporter questions about the appropriateness of Trump’s abuses of power.”

“This fall, McSally refused to rule out accepting foreign help in her own election — and then ran away from Arizona reporters.”

“It’s clear that Martha McSally’s only goal is to protect her party leaders and her personal political future. She has no interest in hearing the facts, uncovering the truth, and being an independent representative for Arizonans.”

Arizona and the Nation need Senators who can handle the truth and put country over cult (party).

Martha McSally and Susan Collins, along with Political Prince of Darkness-Grim Reaper- Enemy of the People-Moscow Mitch, backstabbing Lindsey, and the other willing accessories in the Former Party of Lincoln have proven they are not what the country needs for public servants.