Public opinion is firmly behind Democrats’ push for action as Congress returns to Washington on Monday. More Americans say they trust congressional Democrats over Trump to handle the nation’s gun laws, 51 percent to 36 percent, with independents siding with Democrats by a 17-point margin — a divide that could have political ramifications for the 2020 presidential and congressional elections.

Democrats and allied activists have been trying to kick-start a national push for new federal gun restrictions for weeks, since mass shootings last month in El Paso and Dayton, Ohio. Urgency dissipated as a six-week congressional recess wore on, but a deadly rampage in West Texas on Aug. 31 has reignited the issue.

The Post-ABC poll finds 86 percent of Americans support implementing “red flag” provisions, which allow guns to be taken from people judged to be a danger to themselves or others. And 89 percent support expanding federal background checks to cover private sales and gun-show transactions. Both measures are supported by at least 8 in 10 Republicans, white evangelical Christians, members of gun-owning households and other traditionally conservative groups. 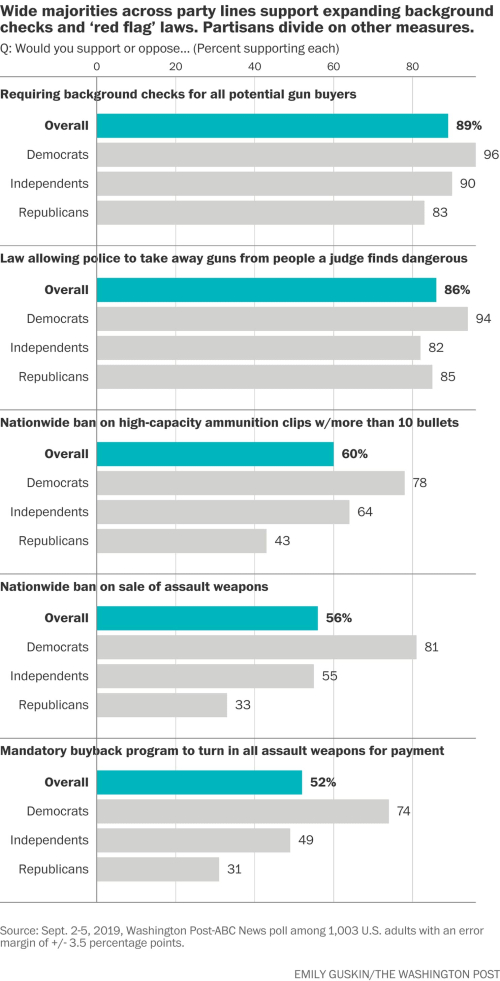 More far-reaching restrictions also have majority support, the survey finds, albeit by more modest margins. Six in 10 support a federal ban on gun magazines holding more than 10 rounds of ammunition.

A 56 percent majority supports a new federal ban on sales of military-style assault weapons, and nearly all who support such a ban also back a mandatory federal buyback program for those weapons — a notion that has been decried as government “confiscation” by gun-rights supporters and has been at the fringes of the national gun debate until recently.

The House passed two bills expanding federal background checks in February — both face a veto threat from Trump — and party leaders are pushing Senate Majority Leader Mitch McConnell (R-Ky.) to act on them. This week, the House Judiciary Committee is expected to advance a bill encouraging states to create “red flag” laws as well as other gun-control measures.

Besides the red-flag bill, the House Judiciary Committee is expected to advance a proposed federal ban on high-capacity magazines and a third bill that would bar people convicted of misdemeanor hate crimes from being eligible to purchase firearms — measures that go beyond the party’s previous comfort zone.

A growing number of Democrats — and a few Republicans — have signed on to a Cicilline-authored bill reimposing a version of the Federal Assault Weapons Ban that was in place from 1994 to 2004. The House Judiciary Committee will hold a hearing Sept. 25 on the bill — a significant step for Democratic leaders who have long treated an assault weapons ban as too politically risky.

A majority of Arizonans say the current laws on the sale and ownership of guns in Arizona are not strict enough, according to a survey conducted by OH Predictive Insights (OHPI).

The poll was conducted August 13 – 14th, with a sample of 600 respondents identified as likely voters. The medium utilized was a blended phone survey yielding a +/-4% MOE.

The recent spate of gun violence across the country is clearly shifting public opinion,” said Mike Noble, Chief of Research and Managing Partner of Phoenix-based research company OH Predictive Insights. “In the last three months, the most notable demographic shift was among the coveted Independent voter bloc while Republicans and Democrats saw only a marginal shift,”

Fifty-four percent of the likely 2020 General Election voters believe that the current laws in Arizona on the sale and ownership of guns are not strict enough. We also found that 46% of respondents identified as either they or someone in their household owned a gun while 52% were non-gun households.  The poll further shows that those who think the laws are not strict enough increased 6-points from 48% (OHPI May Poll)  to 54%. While those who believe the laws are too strict dropped 2-points from 6% to 4% compared to the poll results released in May. 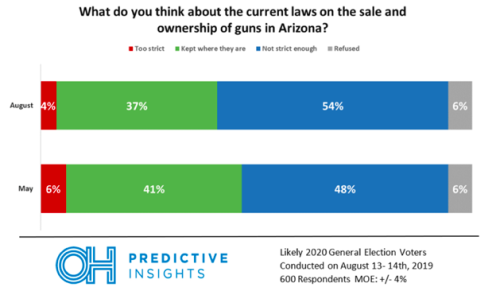 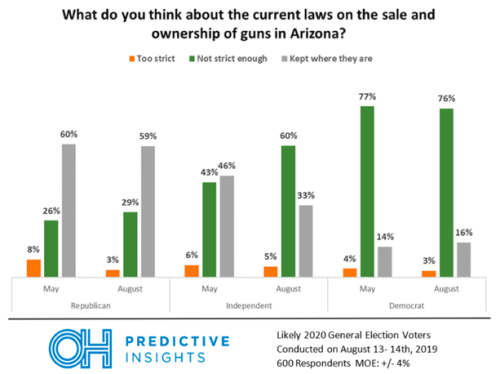 So how does a tyranny of a minority of radical Republicans who are beholden to the NRA respond to demands by the vast majority of Americans to “do something!” about America’s epidemic of gun violence?

That’s one way to try halt public debate in this country: by threatening mass violence and a bloody people’s revolt in the streets. That’s what conservative media voices, including those on Fox News, have done in recent days. Specifically, the reckless rhetoric has revolved around proposed new gun laws in the wake of America’s latest string of mass shootings. Those are laws that would likely only be enacted if Democrats won the Senate and the White House in 2020.

These kinds of alerts about looming political violence if the opposition party wins power and passes laws in a democratic fashion represent the worst type of far-right insurrectionism. It’s an ominous and long-held belief among conservatives and conservative media outlets that citizens need to be fully armed in order to one day wage war on the American government, as a kind of second American civil war. In other words, the reason the Second Amendment exists is not for self-defense, or to protect the rights of hunters and gun enthusiasts, but to enable citizens to go to war with the U.S. government, and to fend off a “tyrannical” turn at home.

“The core philosophy of the Three Percenter movement, whose adherents have engaged in violence, is that citizens would be justified in taking up arms to violently overthrow the government if the government enacted stronger gun regulations,” Media Matters recently noted.

During the gun debate that unfolded following the Sandy Hook school massacre in Connecticut, Fox’s Todd Starnes warned there would “a revolution” if the government tries to “confiscate our guns,” while Fox News Pat Caddell claimed the country was in a “pre-revolutionary condition,” and “on the verge of an explosion.”

Now, with the prospect of Democrats seizing power and passing new gun laws coming into possible focus, the radical calls for rebellion are back. Expect to see more of these bloody warnings in coming months if, as the 2020 election season unfolds, it becomes clear Trump won’t be re-elected next year.

The latest round of chilling right-wing media chatter of pending violence was prompted by comments made by Democratic candidate Beto O’Rourke, who is advocating a mandatory buyback program to rid the country of assault weapons. “Americans who own AR-15s and AK-47s will have to sell them to the government,” O’Rourke proposed. Context: Those are the type of weapons that were banned in the United States following the passage of the 1994 Crime Bill under President Bill Clinton. (The guns were reinstated when President George W. Bush allowed the ban to expire.)

That debate about eliminating assault weapons from our streets then set off a rash of warnings about pending bloodshed. Washington Examiner executive editor Seth Mandel defended statements McCain and Carlson made, tweeting that “it’s not justifying or threatening an insurrection to predict” that a mandatory gun buyback program “is likely to go badly.” Townhall’s Kurt Schlichter asked, “How many deaths” is O’Rourke “willing to accept to achieve disarming the citizenry?” Appearing on Fox News, professional wrestler Tyrus was invited to pontificate about guns: “If my military has it, if my government has it, and we get into a situation with all this division and supposed one-side will take over. I don’t want to be in the Venezuela situation, to where I can’t form a militia and protect myself.” And right-wing radio show host Erick Erickson warned that friends of his who keep AR-15s buried in the ground will likely resort to violence against the government.

The sinister, desperate threats of bloodshed come as the public opinion pendulum continues to swing away from the NRA and its radical gun defenders. Last Thursday alone saw three enormous retail chains, CVS, Walgreens, and Wegmans, alter their store policies to discourage customers from carrying guns. Those announcements came in the wake of the big news that Walmart, America’s largest retail chain, stated it would stop selling ammunition used for handguns and military-style weapons, completely end the sale of handguns, and discourage anyone from carrying weapons in its stores.

Many major retailers that previously refused to take a stand on the issue of guns in their stores are now stepping up, and this highlights the momentum on the side of gun safety advocates. The tide is turning in this country, so radical holdouts at Fox News turn to threats of violence.