Home/AZ Politics/Mr. Ducey wants to go to Washington
Previous Next 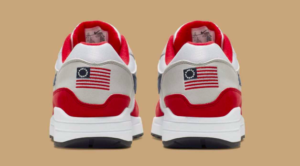 The line of sneakers with the Betsy Ross Flag recalled by Nike because Alt Right White Racists have taken the image for their own.

As AZ Central columnists Elvia Diaz, Laurie Roberts, and EJ Montini have already written in their columns, Nike, fearful of alienating customers, chose to heed the advice of one of their spokespersons Colin Kaepernick, who correctly pointed out that white nationalist scum are using that historic symbol for their own purposes, and drop a line of sneakers that would have depicted the original American Flag, whose design is credited to Betsy Ross.

This stand by Nike gave an opportunity to politically ambitious Arizona Governor Doug Ducey who, imitating a certain Popular Vote Loser, launched a series of tweets, starting at 2:00 a.m. on Tuesday, July 2, designed to get the attention of conservative commentators (and donors) on the East Coast, condemning the Nike decision and directing the Arizona Commerce Authority to withdraw previously agreed monetary inducements for Nike to construct a manufacturing plant in Goodyear.

In response to the Governor’s actions, the Mayor of Goodyear, Georgia Lord said that Goodyear would still honor the economic incentives it has agreed to with Nike and the company has not indicated it would go elsewhere at this time.

Up until yesterday, the great majority of Americans (including myself, a history teacher, as well as probably many history textbook writers), probably unwisely in hindsight, did not realize that alt-right racist scum had appropriated the Betsy Ross flag as their symbol to restore the country to their version of what the United States should be. Most people, like the recent piece of Rolling Stone Magazine illustrates, think it is the Confederate Flag that these individuals drape around themselves.

Nike should not have let this situation get this far.

Nike, with its vast staff of researchers and marketing executives, should have uncovered, sooner in the design stage, that this symbol would make racists happy and alienate African Americans. That is the height of stupidity and it gives an opportunity to extremists on both sides to advocate for positions out of the mainstream. They have given an opportunity for the KKK endorsed Trump and the “Grim Reaper” Mitch McConnell to capitalize on with their fringe bases.

They have also given an opening to potential 2024 Dark Horse Presidential Candidates like the Governor of Arizona, Doug Ducey. 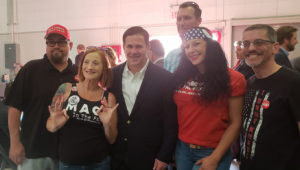 Governor Ducey stupidly taking a picture with members of the White Nationalist Patriot Movement (during the 2018 election season) whose individuals are philosophically aligned with the people who have appropriated the Ross flag for their UnAmerican purposes. Photo from Southern Poverty Law Center

Ducey, the one who did take a picture with the very people who share views with those that have appropriated the Betsy Ross Flag,  should build his national ambitions on how he has helped Arizona’s most vulnerable (like Arizona’s children) instead of politically charged code slogans and words.

Oh, he has not done much to help Arizona’s most vulnerable.

Doug Ducey is not Jimmy Stewart and he should not be given an opportunity to go to and serve in Washington.