Things may get very real very fast on the Korean peninsula this weekend. The hermit kingdom of North Korea is about to celebrate a birthday bash on Saturday, with a nuclear test for the candle on the birthday cake. A U.S. Navy strike group is patrolling off the coast of North Korea to snuff out their birthday candle should they try to light it. If this scenario plays out, we are going to need a lot more than Team America: World Police.

The Los Angeles Times has a good introduction in North Korea says it’s ready for war, but Pyongyang remains a city of orderly calm:

North Korea is expected to test a missile or nuclear weapon as early as Saturday — the 105th birthday of the country’s late founder Kim Il Sung — and anxiety is mounting.

President Trump has moved a Navy strike group to the Korean peninsula. Vice President Mike Pence was scheduled to travel to South Korea on Saturday. Japan has issued a warning over North Korea’s suspected chemical weapons capabilities, with officials in Tokyo discussing how to evacuate the country’s 60,000 citizens from North Korea.

Chinese foreign minister Wang Yi warned Friday morning of “storm clouds” gathering over the Korean peninsula, saying that “tit-for-tat threats between the United States and North Korea with daggers drawn has created a dangerous situation worthy of our vigilance.”

In Pyongyang, vice minister Han Song Ryol accused the United States of fomenting the trouble and vowed, “We will go to war if they choose.’’

The U.S. is prepared to launch a preemptive strike with conventional weapons against North Korea should officials become convinced that North Korea is about to follow through with a nuclear weapons test, multiple senior U.S. intelligence officials told NBC News.

North Korea has warned that a “big event” is near, and U.S. officials say signs point to a nuclear test that could come as early as this weekend.

The intelligence officials told NBC News that the U.S. has positioned two destroyers capable of shooting Tomahawk cruise missiles in the region, one just 300 miles from the North Korean nuclear test site.

American heavy bombers are also positioned in Guam to attack North Korea should it be necessary, and earlier this week, the Pentagon announced that the USS Carl Vinson aircraft carrier strike group was being diverted to the area.

The U.S. strike could include missiles and bombs, cyber and special operations on the ground.

The danger of such an attack by the U.S. is that it could provoke the volatile and unpredictable North Korean regime to launch its own blistering attack on its southern neighbor.

“The leadership in North Korea has shown absolutely no sign or interest in diplomacy or dialogue with any of the countries involved in this issue,” Victor Cha, the Korea Chair at the Center for Strategic and International Studies told NBC News Thursday.

On Wednesday, North Korea said it would “hit the U.S. first” with a nuclear weapon should there be any signs of U.S. strikes.

On Thursday, North Korea warned of a “merciless retaliatory strike” should the U.S. take any action.

“By relentlessly bringing in a number of strategic nuclear assets to the Korean peninsula, the U.S. is gravely threatening the peace and safety and driving the situation to the brink of a nuclear war,” said North Korea’s statement.

North Korea is not believed to have a deliverable long-range nuclear weapon, according to U.S. experts, nor does it yet possess an intercontinental missile.

The U.S. is aware that simply preparing an attack, even if it will only be launched if there is an “imminent” North Korean action, increases the danger of provoking a large conflict, multiple sources told NBC News.

“It’s high stakes,” a senior intelligence official directly involved in the planning told NBC News. “We are trying to communicate our level of concern and the existence of many military options to dissuade the North first.”

“It’s a feat that we’ve never achieved before but there is a new sense of resolve here,” the official said, referring to the White House.

The threat of a preemptive strike comes on the same day the U.S. announced the use of its MOAB — or Mother of All Bombs — in Afghanistan, attacking underground facilities, and on the heels of U.S. missile strikes on a Syrian airbase last week, a strike that took place while President Trump was eating “The Most Beautiful Piece Of Chocolate Cake” with Chinese President Xi Jinping at Mar-a-Lago.

China has since sent its top nuclear negotiators to Pyongyang to communicate the gravity of the situation to the North, officials say. On Wednesday, President Xi called for a peaceful resolution to the escalating tensions.

UPDATE: The Chinese foreign minister urged Washington and Pyongyang on Friday not to push their recriminations to a point of no return that would allow war to break out on the Korean Peninsula. China issues stern warning to U.S., North Korea over their growing tensions. If they allow war to break out on the peninsula, they must bear the historical responsibility and “pay the corresponding price,” Wang warned. In the event of war, “multiple parties will lose, and no one will win,” he said. “It is not the one who espouses hasher rhetoric or raises a bigger fist that will win.”

Moscow has weighed in as well: “We are gravely concerned about Washington’s plans regarding North Korea, considering hints about the unilateral use of a military scenario” the Putin government said in a press release issued on Tuesday.

Implementation of the preemptive U.S. plans, according to multiple U.S. officials, depends centrally on consent of the South Korean government. The sources stress that Seoul has got to be persuaded that action is worth the risk, as there is universal concern that any military move might provoke a North Korean attack, even a conventional attack across the DMZ.

Tensions have escalated on the Korean Peninsula, as this Saturday marks the anniversary of the birth of the nation’s founder — Kim il-Sung, grandfather of the current leader, Kim Jong-un. At the highest levels in South Korea and the U.S., sources told NBC News, there are fears North Korea could mark the “Day of the Sun” by testing a nuclear device.

“North Korea in the past has used these major national holidays to celebrate the strengths of the regime and to reinforce the national narrative of their independence,” says Cha.

According to multiple sources, the U.S. intelligence community has reported with “moderate confidence” that North Korea is preparing for its sixth underground nuclear test, though the U.S. is also in the dark regarding the specific timing.

President Trump made clear that if the Chinese were unable to defuse the situation, the U.S. would go to alone. On Thursday, he tweeted: “I have great confidence that China will properly deal with North Korea. If they are unable to do so, the U.S., and its allies will!” 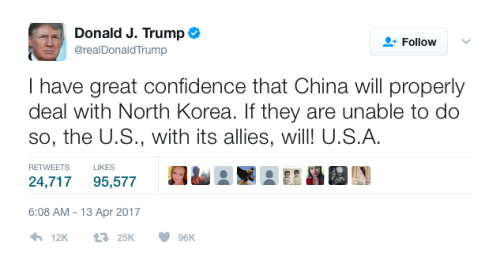 Earlier Friday, North Korea accused President Trump of “making trouble” with his “aggressive” tweets, amid concerns that tensions between the two countries could escalate into military action.

And the North Korean army threatened to annihilate U.S. military bases in South Korea and the presidential palace in Seoul in response to what it called Trump’s “maniacal military provocations.”

Tensions have been steadily mounting in recent weeks, as North Korea prepares for what it is calling a “big” event to mark the anniversary of the founder’s birthday Saturday, while the Trump administration warns that all options are on the table.

North Korea’s vice foreign minister Han Song Ryol told the Associated Press in an interview in Pyongyang, “We’ve got a powerful nuclear deterrent already in our hands, and we certainly will not keep our arms crossed in the face of a U.S. preemptive strike.”

As for when the next nuclear test would take place, “that is something that our headquarters decides,” Han said.

“The words from the administration are creating even higher volume in terms of the provocations that are going on. I think we have got to be careful here,” Panetta told NBC News’ Andrea Mitchell. “We should not engage in any precipitous action. There is a reason no U.S. president in recent history has pulled the trigger on North Korea.”

He added, “We have the potential for a nuclear war that would take millions of lives. So I think we have got to exercise some care here.”

“You have got 20 million people in Seoul; that would be a target” of a potential North Korean attack, the former CIA director added. “We’ve just given China the opportunity to engage. Let’s see how they do.”

This is now where we are at with North Korea. It is those who are in harms way who will ultimately pay the price should anything go wrong.

Sorry, but no, there will not be a V-shaped quick economic recovery

36 Days to Get Invest in Ed on the Ballot