On the Ground in Philadelphia

Home/Education/On the Ground in Philadelphia
Previous Next

On the Ground in Philadelphia 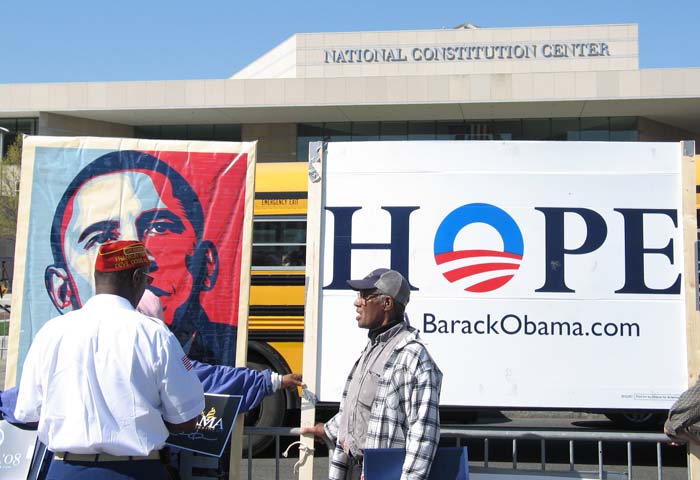 I’m in Philly visiting family and working on the Obama campaign. Does any other Arizona blog have a correspondent right here where the action is? I don’t think so! (Mike, you said you’d pay my expenses, right? Mike? Are you there, Mike?)

I took the photo at around 3:30 Philly Time in front of the Constitution Center where the debate will be happening tonight (I saw Jonathan Alter walk past — identified him by his hairline more than his face.)

The Clinton and Obama camps were across the street from the center waving signs and chanting slogans. The Clinton campaign way out-organized the Obama folks on this front. They had hundreds of people in matching t-shirts carrying triple signs on long poles. We had about half as many people, most of us waving small lawn signs. Ah well, signage doesn’t matter much, does it?

On last night’s 11pm local news, the lead story was the campaigns. They asked whether the recent dust-up hurt Obama, and their conclusion was, the polls say no. He’s about 6% behind Clinton, which is where things were a few days ago. The words “bitter,” “guns” and “God” were not mentioned, which says to me the whole story is over, unless something else revives it.

The two local papers were equally low-keyed about the Obama statement that the Clinton and McCain camps tried to turn into the elite, anti-God, anti-gun statement of the millennium. The worst they could say was, maybe the story slowed Obama’s momentum.

On the education front, the Philly Charter Schools are up to have their contracts renewed, and it looks like a few of them might be in trouble. Two might have the plug pulled due to poor performance. And in a completely separate incident, it looks like a family has been paying itself lavishly to run two charter schools, and they could be in deep trouble. This kind of thing couldn’t happen in Arizona, of course. Nobody’s watching. The state has put no money in the budget for monitoring or oversight of charter schools, so we really don’t know much about what they’re doing. Some are probably wonderful. Others are probably awful. But no one is minding the store.