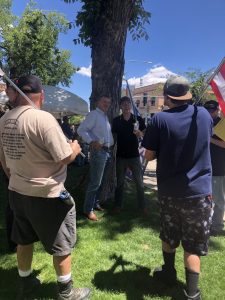 Well, it did not take long for others to recognize that the people Gosar were engaging with belonged to white nationalist and ultra-right-wing fringe groups The Proud Boys and The Oath Keepers.

Here's Congressman Paul Gosar posing for a photo with what appears to be a member of the Proud Boys, a known hate group.

As a bonus, the man on the far left of the photo is wearing a T-shirt for the Oath Keepers, an anti-government extremist organization. https://t.co/pcIvbmOB8F

Of course, Mr. Gosar took exception to anyone criticizing the company he keeps. He tweeted back:

And here is @nickmartin with what appears to be pure speculation motivated by his hate of America and some locals celebrating 4th of July. Nick is a member of a socialist front group called @NBCNews He is an enemy of the people. #July4th #KAGA2020 https://t.co/GszyXa3s0k

So in Paul Gosar’s world view, the people he posed with were just “some locals” and the person who sent the original tweet (Nick Martin) is “the hater of America who is the enemy of the people.”

Ladies and Gentlemen who live in Congressional District Four who do not drink the Kool-Aid from Fox Island, Disinfowars, or the Trump Zone: Is this the person you want to continue to represent you in Congress in 2021?

The two Democrats (Deliana DiSanto and Stuart Starky)  competing for the opportunity to electorally retire Mr. Gosar this November expressed their views (via tweet and comments to Blog for Arizona) on the CD Four Representatives choice of pals.

Oath Keepers founder, Stewart Rhodes said @SenJohnMcCain should be hung. Now we have @RepGosar taking pictures with these people 👇
Is this the kind of representative you want in Congress?
I will fight for our constitution #ForThePeople, #ForOurDemocracy https://t.co/XJr8HHpECQ https://t.co/IwUHMYv3WA

“I was made aware that Rep. Paul Gosar was at a 4th of July event in Prescott at Prescott Square. Vaughn Hillyard, NBC News political reporter, had taken a picture of Rep. Gosar with a member of Proud Boy and there was a member of Oath Keeper in the frame. Vaughn posted this on twitter.”

“The Oath Keepers founder, Steward Rhodes had said that U.S. Senator John McCain was a traitor to our constitution and should be hung until dead. This is the kind of people Rep. Gosar surrounds himself with. He incites them with lies of their guns being taken away; that their freedoms are being taken away; that foreigners are taking their jobs; and it continues with many conspiracy theories. I’ve heard he likes to create this rhetoric to stir attention to himself. Well, this rhetoric is causing more hatred. It’s empowering his base to draw guns whenever a confrontation occurs. Is this the America we want? Do we want our leaders to associate with hate groups and prop them up? That’s not what our Constitution was created for. Is he a patriot to his country? Is he for the people? Or is he just picking and choosing what people he will represent? Is this the kind of representative you want?”

“Well, I’m not like him at all. I will be an advocate for all the people of Congressional District Four, not just a few. I have seen how hate can hurt people and not just people of color or people of different sexual orientation, but all people. They are hurting and I promise to find the solutions, not play games for attention or cause divisiveness.”

Inclusion and love or. Hate and extremism. #AZCD4. Together we can lead change and end the Trump Gosar McSally nightmare. I need you voting in our primary. https://t.co/tWAuYPhXAI pic.twitter.com/5IIboQmiJE

@YavapaiDemocrat this is why I must win Here is Congressman Gosar celebrating our freedom with hate groups. TOGETHER. Now vote in the primary and let’s end the Trump hate party https://t.co/slgq8omEhG

While I was campaigning about health care and better schools. My opponent Congressman Gosar is posing with white nationalists. I guess he wants to beat the other right wing extremists in the republican primary. I NEED you now https://t.co/slgq8omEhG #EndRacism https://t.co/HNl8TWMvnl

“I am campaigning on healthcare and better schools and civility back in govt. He is campaigning on hate. Never had an election had the differences do clear for the voters.”

Matt Grodsky, the spokesperson of the Arizona Democratic Party issued a statement on July 6, 2020, writing:

“The country is reeling from two crises. Racial injustice and COVID-19. Gosar managed to be on the wrong side of both of them in just one week.It is beyond embarrassing for Arizona to be represented by someone who disregards medical experts and poses for photos with members of hate groups. Gosar has got to go in November.”

The people of CD Four deserve better than Paul Gosar.

His backward and nativist views and those of his natural constituents are not those that will bring Arizonans together and move the state and country forward.

There are two viable alternatives to choose from. Do what most of Dr. Gosar’s family will do this primary and choose one of them.