This article first appeared on Democrats of Greater Tucson.

On healthcare, Sen. Leach wants to repeal Obamacare and protect the free market system? How many in Arizona would lose their health care if Sen. Leach has his way?  How many would be rejected because of a pre-existing condition?

Finally, if Sen. Leach is pro-life, shouldn’t we expect him to support all social programs for the poor and disadvantaged? Shouldn’t we also expect the senator to support and fund public schools and stop pubic money going to charter and religious schools?

What matters to Rep. Mark Finchem (R-LD11) is personal freedom (whatever that is supposed to mean) economic security, quality education, and a debt-free future.

If Finchem wants economic security, I would urge him to let the governor know of his concerns and tell him to increase the unemployment benefits for the 452,000 Arizonans out of work.

Unfortunately, state lawmakers — at the behest of the business community — have capped payments at $240 a week, no matter how much the person was earning before, a figure that has not to been altered since 2004. Only Mississippi pays less. In the meantime, the governor said he sees no reason to address the issue of unemployment benefits.” 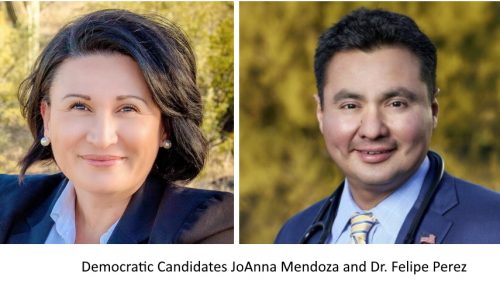 For Democrat for Senate JoAnna Mendoza, a retired military veteran, her priorities are education, military, veterans and families, health care, and the environment. She’s for fully funding public education, paying teachers their real worth, and equipping our schools with all resources that they need. For health care, she supports KidsCare, which provides healthcare for children.

Democrat for the House Dr. Felipe Perez’s priorities are to fix healthcare, senior wellness, improve education and protect the environment. Being a physician, he knows first-hand most people are unable to afford health care. For education, he wants to fund our public schools fully. (Sen. Leach wants to repeal the Affordable Care Act also the pre-existing conditions part, so that most middle- and lower-class citizens would lose their health care)

For the Republicans, it’s the same old same old that isn’t working for the majority of Arizonans. For the Democrats, it’s full school funding, affordable health care through the Affordable Care Act, and protect the environment.

The choice is clear.