During the presentation of what NBC journalist Mike Memoli called his new “Justice League” with the prospective new leading members of the Attorney Generals Office, President-Elect Joe Biden condemned the apparent double standard exhibited by some members of Capitol Hill Law Enforcement towards the Pro-Trump Domestic Terrorists who launched an attempted insurrection on Congress yesterday (January 6, 2021.)

Please watch the video of the event below.

Citing a conversation with his granddaughter, Biden pointed out that law enforcement treated these Trumpist Domestic Terrorists with more deference and less concern than Black Lives Protestors during the summer, saying:

“A little over an hour and a half after the chaos started, I got a text from my granddaughter, Finnegan Biden, who is a senior in her last semester, the University of Pennsylvania. She sent me a photo of military people in full military gear. Scores of them lining the steps of the Lincoln Memorial. Because of protests by Black Lives Matter. She said, “Pop. This isn’t fair.”

“No one can tell me that if it had been a group of Black Lives Matter protesting yesterday, they wouldn’t have been treated very, very differently than the mob of thugs that stormed the Capitol. We all know that’s true, and it is unacceptable. Totally unacceptable. The American people saw it in plain view. And I hope it’s sensitized them to what we have to do. Not many people know it.”

The picture Biden’s granddaughter cited was this one. 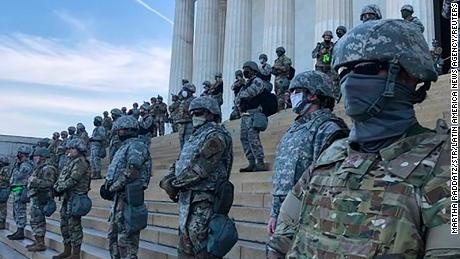 What did occur was this?

Or please click here on this video link to see the smiling and jubilant Domestic Terrorists walking out of the Capitol Building on their own accord, not under arrest.

If these people were Black, Latino, Native American, or Muslim, there is no doubt law enforcement would have acted differently and less tolerantly.

That includes those from top to bottom in the chain of command starting with the Chief Executive Demagogue hiding in the White House who started all of this.

House Speaker Nancy Pelosi and soon to be Senate Majority Leader Chuck Schumer are apparently taking the appropriate first steps by expediting the departure of the House and Senate Sergeant at Arms as well as the head of the Capitol Police.

Law Enforcement and Justice, as Attorney General Nominee Merrick Garland and Vice President-Elect Kamala Harris said at today’s announcement of the Justice Department Nominees, needs to be equally applied to everyone in society.

“It’s about how to reform, how to transform a justice system that does not work equally for all, a justice system that is experienced differently, depending on whether you’re White or Black, a justice system that is experienced differently if you’re rich or poor, a justice system that’s different depending on whether your job requires you to take a shower before you go to work or requires you to take a shower when you come home after work. We witnessed two systems of justice when we saw one that let extremists storm the United States Capitol, and another that released tear gas on peaceful protesters last summer. The American people have expressed rightly outrage. We know this is unacceptable. We know we should be better than this. The promise of our country is that all people will be treated equally. That’s what the rule of law is supposed to be about. That’s what the ideal of equal justice under law is all about.”

How true the Biden, Garland, and Harris statements are.

Hopefully, the New Administration and their nominees for the Justice Department, will right the ship and be able to bring back the concept and reality of equality before the law.