Republicans do not care if Gold Star Families have to pay a Death Tax.

Home/National Politics/Republicans do not care if Gold Star Families have to pay a Death Tax.
Previous Next

Republicans do not care if Gold Star Families have to pay a Death Tax. 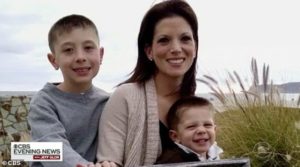 Gold Star Family Teresa Jones and her two sons who just received a $5400 tax bill on their $15,000 worth of survivor benefits.

Remember the latest Tax Cut scheme (passed in 2017) that Trumpist-Republicans led by the Popular Vote Loser said, despite historical evidence, would trickle down and help the Middle and Lower Class.

That can not be said for the Gold Star children and spouses of fallen veterans as the survival benefits they receive are now being taxed like they are part of a standard investment estate annuity.

Now there are Gold Star widows and orphans who are receiving tax bills that are surprisingly large that these families do not know how they will make ends meet in order to pay the bill. One widow, Jessica Braden Rogers, saw her tax bill on her survival benefits go from $1,100 to $4,600.00. Another widow, Teresa Jones, who has two children to support, saw her taxes on $15,000 worth of survivor benefits go up to $5400.00.

What LUNACY is this?

It seems that the Trumpists-Republicans in their greedy quest to ensure that the wealthy and corporations were spared from what they perceive as high estate, individual, and corporate tax rates have shifted the death tax burden to the families of the individuals who made the ultimate sacrifice for our country by lumping them with the children of wealthy individuals who put their investments in their child’s names.

This is an outrage and the height of indecency, misplaced priorities, and immorality. These families benefits should not be taxed in the first place. This country owes them a debt and to expect them to pay for what they and, more importantly, their fallen spouse or father, sacrificed, strains belief.

While Senator Doug Jones and Representatives John Yarmuth, (Democrat from Kentucky), and Joe Wilson, (Republican “You Lie” from South Carolina), have drafted bills to address this situation, the Treasury Department and this (in all probability) tax evading President should do what they can now to change the rules so these families are no longer unfairly burdened.

It is the least this country can do for these poor people. Shame on those who made this policy happen in the first place.