Home/AZ Politics, Civil & Human Rights, COVID-19 & Healthcare, National Politics/The Democrats are not running a Do Nothing House. Mitch McConnell, the Enemy of the People, is running a Do Nothing Senate where judges who do not publicly declare Brown vs the Board of Education a good decision can apply.
Previous Next 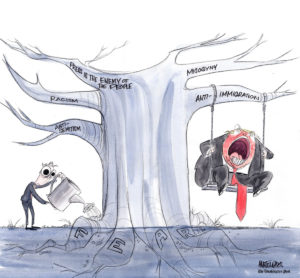 Unfortunately, if you listen to the media and the Liar in Chief in the Oval Office (or via Twitter), Democrats, led by Speaker Nancy Pelosi, are doing nothing in the House of Representatives except pursuing investigations against Individual One, the President of the United States.

While not fake news, it is inaccurate as other columnists like Catherine Rampbell of the Washington Post and panelists like Matthew Dowd on This Week with George Stephanopoulos have written about and discussed the legislative bills the Democrats have passed in the House since gaining control of the chamber in January 2019.

Democrats, under Speaker Pelosi, can clearly walk (investigate Individual One) and chew (consider and pass legislation) at the same time.

In close to the first six months of 2019, the Democratic House has passed measures that have:

According to Dowd, the Democratic House has passed 200 bills since January.

What has happened to the great majority of this House legislation, supported by a huge percentage of the American People,  as it has been passed on to the Republican-controlled Senate?

In a word NOTHING.

Senate Majority Leader (also referred to as Obstructionist in Chief, Supreme Court Thief, and Enemy of the People) Mitch McConnell has largely stopped these largely common sense and, yes, progressive measures from seeing the light of day in Senate committee hearings, never mind the Senate floor for a vote because he has chosen to serve his oligarchical Dark Money sponsors and spend most of the Senate time ramming through reactionary judges who will not say if the landmark desegregation in public school Brown vs the Board of Education decision was a good ruling onto the federal bench. He has also persisted in the fallacy that the case is closed with regards to the Mueller Investigation and Report, further enabling the man baby in the White House where the Majority Leader’s allies are influencing judicial nomination decisions.

It is McConnell and his allies, including Acting Chief of Staff Mick Mulvaney, not Democratic investigations, that are the leading obstructionists that are preventing a needed multi-trillion dollar infrastructure bill on our roads, highways, broadband, airways, shipping, and electric grid from being considered and voted upon. The KKK candidate and 2016 Popular Vote loser blame the Democrats because he would look like the weak executive he is if all the people knew that members of his own party were against him on one of his major domestic policy goals.

In order to stop this continued obstructionism and shift to a backward plutocratic, legalized segregation oligarchical society where the voice and dreams of the people are stifled, Democrats and Progressives need to remember that taking the Presidency and the House in 2020 is not enough. The Senate (and probably filibuster reform afterward) is key to putting this country back on the right course. Republicans, including the need to get rid of McConnell, have to defend 22 seats. Democrats need a net gain of three seats (with a Democratic Vice President as a tie-breaking vote) to gain control.

Democrats need to make taking the Senate as much of a must need priority as keeping the House or electing a Democratic President. Otherwise, this country will be plagued with the standard Republican obstruction that hampered both the Clinton and Obama Presidencies.

The country can not afford or live through that again.