Has anyone ever wondered why people like Vice President Mike Pence, Dr.Anthony Fauci, the Surgeon General Jerome Adams, FEMA Director Pete Graynor, and Governors like  Andrew Cuomo have to continually kiss the Stable Genius’s tukas (butt) at daily briefings?

Apparently, because that is how you get the Prima Donna Mad King in the Oval Office to act for the betterment of the people and the country.

Today, Individual One showed what he thinks of people who do not blow sunshine up his butt.

During the daily briefing on the Coronavirus, the 2016 Popular Vote Loser did not disappoint the media who regularly count on him spewing bull fecal matter statements. Included in his Trump Zone comments was his moaning that Governors like Washington’s Jay Inslee (who the Commander in Chief referred to as a failed Presidential Candidate) or Michigan’s Gretchen Whitmer (who the chauvinistic President with over 20 sexual assault accusations referred to as the woman) did not appreciate all he and the Federal Government were doing to help their states. He even said the Vice President should not even telephone them because “they don’t treat you right.”  The Mad King also repeated that the Federal Government is doing the work the State Governors should be doing.

Please see the video below.

Later the third President in American History to be impeached showed his great immaturity towards people that do not sing his praises (the ones who voted to impeach and convict him) by not inviting any Democrat to the signing of the bipartisan $ two trillion economic rescue plan. The only nonwhite person present was Secretary of Transportation Elaine Chao,  wife of Political Prince of Darkness-Grim Reaper-Enemy of the People-Moscow Mitch McConnell. 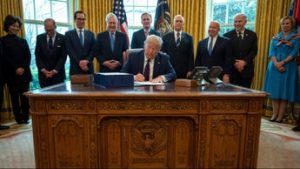 Presidents should not aspire to lead so people can behave like sycophants and tell them, truthfully or otherwise, how great they are.

Presidents should aspire to lead so they can serve the people and make the country a better place than it is when they are first inaugurated.

Donald Trump has never understood that goal of leadership as part of his job description.

He also does not understand that Governors like Whitmer or Inslee do appreciate him.

They appreciate that he is the Prima Donna Mad King that they are stuck dealing with for at least the next ten months.

They appreciate that he is the self-absorbed huckster and blowhard that they have to put up with while hoping (praying) the adults in the room like those from the Center for Disease and Control, Health and Human Services, the FEMA Director, and the Army Corp of Engineers (who the Governors really are grateful to) can help the people in their states in some coordinated method that does not involve state leaders competing against each other for vital medical supplies.

They appreciate that virtually nothing from the Liar in Chief’s mouth is true and they have to wait to hear from other people inside the Administration (sometimes minutes after the President leaves the briefing) for the science-based reality outside the Trump Zone.

People want a President who will tell the truth, lead with an inclusive hand out to others, and work for them by moving the country forward from this crisis.

The people would appreciate that.