by David Safier
The House health care bill proposes a tax — or surcharge, take your pick of terms — on people with incomes above $350,000 to help pay for universal health care. Citizens for Tax Justice has figured out how many Americans would have to pay that tax.

Watch out if you're in Connecticut, which has the highest percentage of folks who will pay. If you're one of the top 2.8% of earners, you're going to dip into your wallets on this one. Next come D.C., Massachusetts and New Jersey, all above 2%. After that, the numbers fall off.

In Arizona, you're going to have to get 111 people in the room before you find one of them who will have to pay the surcharge. Look for the one Mercedes in the parking lot decked out with all the accessories and the new car smell. The owner is probably the poor sap who has to kick in a few bucks. In Arizona, 0.9% of the population will pay.

Of that 0.9%, I imagine most of them will pay a few hundred to a few thousand dollars. It won't amount to anything like real money until you climb up into the "so much money I don't know what to do with all of it" category.

Here's the breakdown by state. 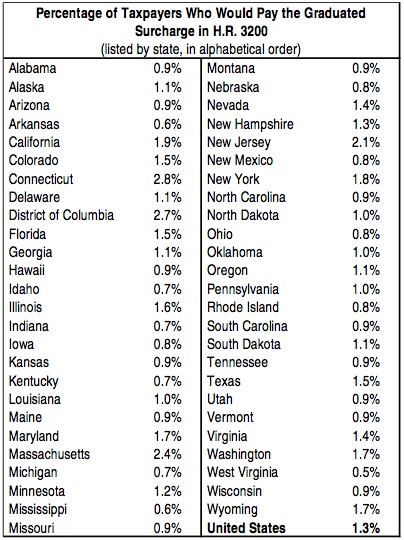